In the agile development methodology, the velocity of testing holds the key to delivering the best quality software within the stipulated budget and time constraints. As such, this drives the need to automate the testing process. Most software development teams visualize test automation as a discreet step in the delivery lifecycle instead of viewing it as a designed sequence of steps. There are various aspects of testing through which software needs to pass, such as unit testing, functional testing, integration testing, smoke testing, performance testing, and more. Each of these needs to be automated in order to achieve certainty of software behavior and reduce the time to test. However, simply automating the tests is not enough to achieve the desired levels of quality and reduction in the time and cost to get there. This is where “test orchestration” plays an essential role.

What is Test Orchestration

For example, at the end of a development sprint, when software is marked as ready for release, there are several activities performed before the software reaches its end users or business users. Each of these test activities may be individually automated, such as automated unit testing and system testing followed by automated integration testing. However, manual intervention is still needed to trigger them at the right moment with the right input data. Test orchestration helps tie together each of the individually automated test activities into one synchronous process.

The key questions delivery teams ask when they already have test automation in place: Why do they need orchestration at all? Is it worth the effort? 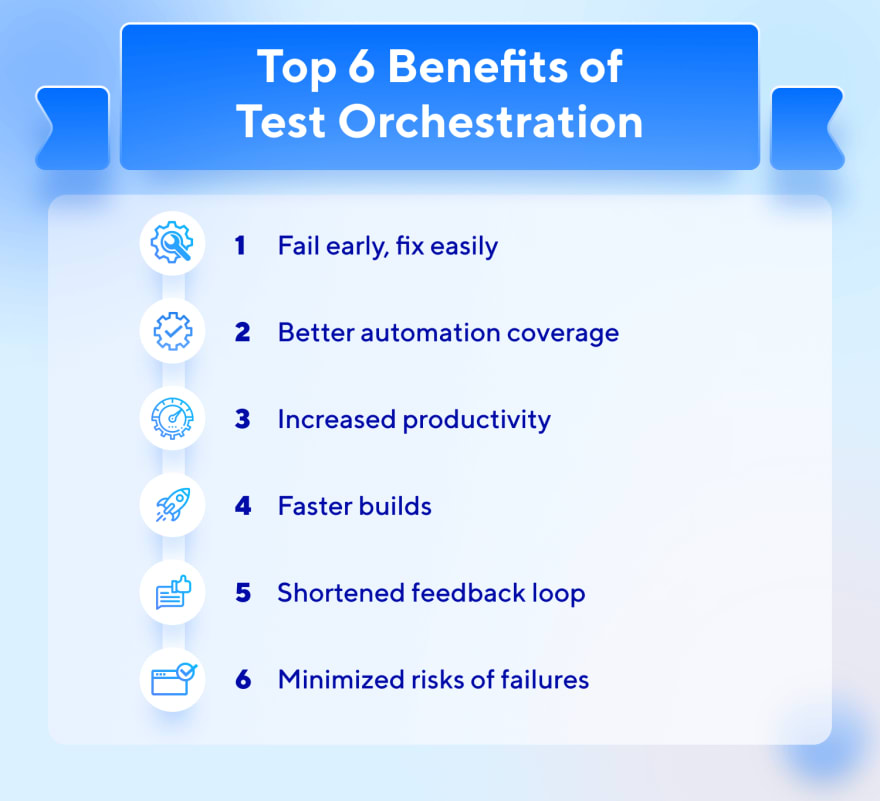 Testing is considered the main bottleneck to fast and continuous delivery. By orchestrating the tests, delivery teams experience several benefits:

When a test case fails early in the delivery cycle, it is much easier to address the issues, and the complexity is low as well.

With test orchestration as an objective of test automation, automation coverage improves for the application. When more test cases are automated, it is easier to reduce the cost and time of delivery.

All aspects of an application can be tested across multiple concerns when the tests are automated and orchestration pipelines are created. It directly improves the overall productivity of the delivery team.

With several automated tests, it is easier and faster to construct the test pipelines and prepare the application builds.

When a certain concern is orchestrated, such as security, only the information and software security experts need to be involved in setting it up and verifying its results.

Minimize the risks of failure.

With orchestration in place, delivery teams can perform several rounds of testing within an extremely limited amount of time and still achieve the desired levels of quality. Test orchestration harps upon the correctness of three critical components:

To enable test orchestration to run the same test cycles multiple times, it is important to carefully enforce the tear down of the data setup during the test initialization.

Where Does Orchestration Fit In

As more and more organizations adopt cloud and DevOps processes, setting up a CI/CD pipeline is the first step toward a better and faster delivery. Continuous testing helps in achieving the desired level of quality and speed of delivery. While CI/CD takes care of orchestrating the entire delivery process, test orchestration is more specialized toward various testing types.

It is important to understand that even the best of the test automation techniques require a certain amount of manual intervention. These manual interventions are generally used to make the adjustments in the test data for the next cycle of testing and the duration of testing. Manual intervention is also necessary to ensure that the environment is stable under a load of data and test executions.

Then comes the need to orchestrate the tests. This helps delivery teams adopt a risk-based approach, where they can focus more on the areas of testing that require a greater focus.

For orchestrating the test execution, the tests must be automated in the first place. But is it really necessary to automate all tests before trying orchestration? The answer is no. With proper planning, several types of tests can be orchestrated. The keyword is “plan.” Improper planning of test orchestration can completely backfire on the quality of the software and lead to inadequate testing.

Effective planning of test orchestration must include the following:

Next Steps | How Katalon Solution Can Help

Over 100,000 enterprise ecosystems use Katalon Studio and Katalon TestOps – the all-in-one test automation solution – to accelerate their DevTestOps approach. Take a look at how this bundle can benefit your teams:

A great solution for one company does not guarantee that it will be a good fit for yours. With over 100,000 organizations and teams using Katalon to customize their test strategies, we’re here to help you start your DevTestOps journey confidently, with the help of Studio and TestOps.

AWS Amplify: Let's add some unit tests into our pipeline