In today's rapidly growing world, every enterprise faces the challenge of matching its pace with customer expectations and software delivery speed. Continuous Integration/Continuous Delivery (CI/CD) is a part of DevOps that can help to achieve rapid software changes while maintaining system stability and security. In this post you will learn how CI/CD works on AWS.

This post is an excerpt taken from the book by Packt Publishing titled "AWS Certified Developer - Associate Guide - Second Edition" and written by Vipul Tankariya and Bhavin Parmar. This book will take you through AWS DynamoDB A NoSQL Database Service, Amazon Simple Queue Service (SQS) and CloudFormation Overview, and much more.

There are various individual AWS web services for DevOps, such as CodeCommit, CodeBuild, CodeDeploy, and CodePipeline. Respectively, these AWS services act as a source code repository and continuous integration service that is responsible for compiling source code, running tests, and producing software packages that are ready to deploy. The deployment service can automate software deployment on various AWS compute services and on-premises servers, and automate the build, test, and deploy phases for the release process.
To implement an Agile process and DevOps culture in the enterprise's IT, manually moving code from development to production may be time consuming and error prone. Also, in the case of failure at any step, it may be time consuming to undo the change and restore the previous stable version. If such an error occurs in a production environment, it may also directly impact the business's availability. On the other hand, we can think of CI/CD as an assembly line. The heart of CI/CD is writing or designing the CodePipeline.

Steps can be managed from the very beginning when a new piece of code is merged with the master branch from the development (usually, the master branch in the repository consists of the final code for use in the business) till the last step of deploying the compiled and tested software to the production environment. CI/CD stops the delivery of bad code to the production environment by embedding all the necessary tests, such as unit tests, integration tests, load tests, and so on, in the pipeline.

Let's look at some basic terminology with the help of the following screenshot:

When CI is implemented, each of the developers in a team integrates their code into a main branch of a common repository several times during a day. AWS CodeCommit or third-party tools such as GitHub and GitLab can be used as a common source code repository to store developing code. Earlier, in traditional software, the development took place in isolation and was submitted at the end of the cycle. The main reason for frequently committing code several times to a main branch of a common repository is to reduce integration costs. Since, developers can identify conflicts between the old and the new code at an early stage, it is easy to resolve these conflicts and less costly to manage.

Any time developers commit a new code to the common branch at the common repository, no manual methods exist to make sure that the new code quality is good, doesn't bring any bug to the software, and doesn't break the existing code. To achieve this, it is highly recommended you perform the following automatic tasks every time a new change is committed to the repository:

The goal of the CI is to make new code integration simple, easy, and repeatable to reduce overall build costs and identify defects at an early stage. Successful implementation of CI will make changes in the enterprise and will act as a base for CD. CI refers to the build and unit testing stages of the software release process. Every new release commit triggers an automated build and test.

CD is the next phase of CI, and it automates pushing the applications to the various environments, from development to test and pre-production. It is also possible to have more than one development and testing environment for application changes that are staged for various individual tests and review. Even if code has passed all the tests, CD doesn't automatically push the new change to the production. But it makes sure that the code base is deployable and builds are ready to deploy to the production environment at any time.

Teams can be confident that they can release the software whenever they need to without complex coordination or late-stage testing. Amazon CodePipeline can be used to build pipelines, and Amazon CodeDeploy can be used to deploy newly built code to the various AWS compute services or in various environments from development to production.

In general, with the help of the CD release schedules (daily, weekly, fortnightly, or monthly) as per the business requirements, new features are deployed to production on these specific schedules. If the business permits, then develop software in small batches, as it is easy to troubleshoot if there is a problem.

Continuous deployment : An extension of CD

The following diagram helps us understand this process:

The preceding diagram helps to understand the difference between continuous delivery and continuous deployment. Continuous delivery requires human intervention to finally deploy newly built software to the production. This method may help business people decide when to introduce a new change to the market. On the other hand, continuous deployment doesn't require any human intervention to deploy newly built software that has passed all the tests in the deployment pipeline and will be directly deployed to the production.

Based on the business needs, either of these models can be implemented in DevOps. It is important to understand that at least continuous delivery has to be configured to successfully implement DevOps.

At a higher level, the software development life cycle can be broken down into five steps, which are as source, build, test, deploy, and monitor, as shown in the following screenshot: 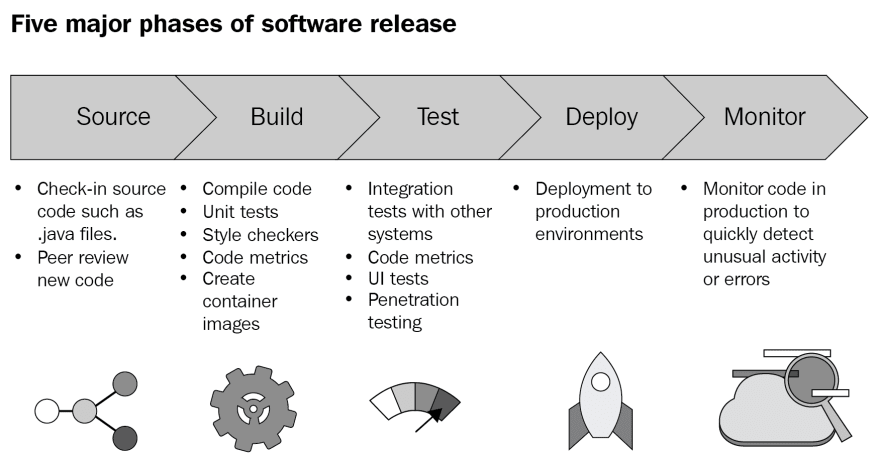 We will go through each of these steps in detail: 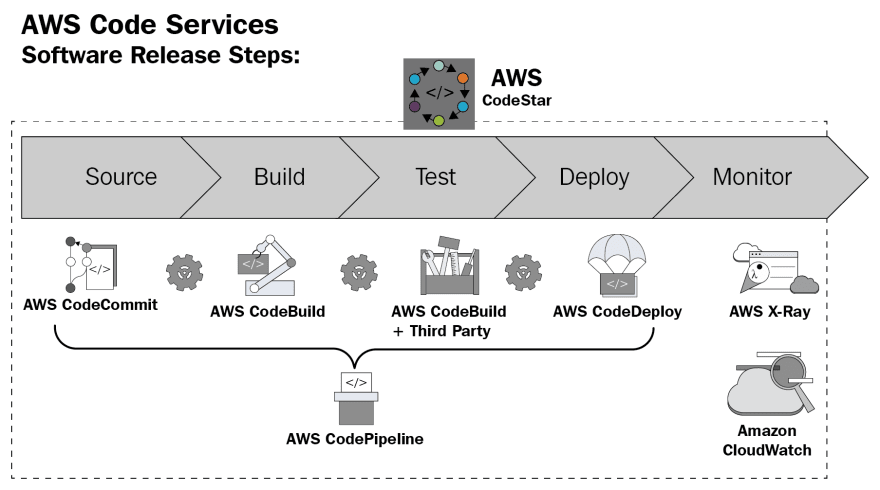 Looking at the preceding diagram, AWS services can be explained as follows:

To summarize, CI/CD is a mechanism that optimizes and automates the development life cycle. This post introduced you to CI/CD on AWS and described how you can use it with your AWS workloads. To further understand Elastic Beanstalk and AWS Lambda, you can read the book AWS Certified Developer - Associate Guide - Second Edition by Packt Publishing.