Depandabot is a really productive solution to keep our products secure and updated.

It is also easy to set up, however, it provides no chance to run a command in the PR, so we have additional considerations if we have some pre-release processes. For instance, for a GitHub Actions repository, we want to keep the dist directory updated by @vercel/ncc right after we update its dependencies.

This article introduces semantic-release as a solution. It automates the release process, and its exec plugin helps us to run @vercel/ncc before the release automatically.

Check the following chapters for detail, or refer to my GitHub repo as a working example.

Make sure you have a npm project in your working directory, and run the following command to install semantic-release and its plugins:

In package.json, confirm that we have a script to run ncc to optimize JS files like below:

In my case, it became like below to use the main branch as default branch, and run exec plugin and git plugin:

Configure .github/dependabot.yml to enable dependabot. Make sure commit-message part is configured with prefix: fix to following the Conventional Commits.

To merge PRs made by dependabot automatic, you may introduce probot-auto-merge. .github/auto-merge.yml will be like below:

If we apply NONE: 0 to minApprovals configuration to merge without manual review, make sure the branch protection rule is created for the default branch, to make sure PRs will be merged only when required status checks have passed.

There is no way to configure the branch protection rule by file, so you need to use GUI at github.com like below: 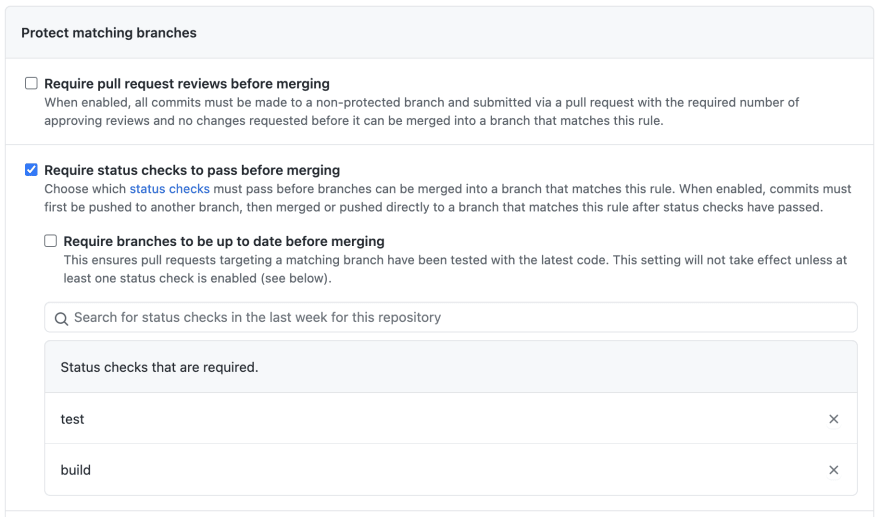 semantic-release needs a GitHub token to push a commit. But when we have branch protection rules for the target branch, secrets.GITHUB_TOKEN provides not enough permission so you'll face an error like below:

To avoid this error, create a PAT and store it as an encrypted secret.

To keep our development environment secure, it's better to keep PAT's scope minimal as much as possible. In my case, just a public_repo scope is enough.

We have a PAT so now we can configure GitHub Actions workflow!
It'll be like below:

Or you may refer to my workflow config as a working example.

Important points are as follows:

Dependabot is really productive, even to GitHub Actions project that needs to keep the dist directory updated. semantic-release helps us not only by tagging but also by running commands to make the project ready to release.

There are several pitfalls around permission control, hope that this article helps you to avoid them. Enjoy hacking! :)

Once suspended, kengotoda will not be able to comment or publish posts until their suspension is removed.

Once unsuspended, kengotoda will be able to comment and publish posts again.

Once unpublished, all posts by kengotoda will become hidden and only accessible to themselves.

If kengotoda is not suspended, they can still re-publish their posts from their dashboard.

Once unpublished, this post will become invisible to the public and only accessible to Kengo TODA.

Thanks for keeping DEV Community 👩‍💻👨‍💻 safe. Here is what you can do to flag kengotoda:

Unflagging kengotoda will restore default visibility to their posts.