On 12 October 2017 MongoDB kicked off a new series of events. I was fortunate to attend the MongoDB.local San Francisco conference along with approximately 600 other MongoDB enthusiasts. If you missed this event, fear not, they will be coming to cities around the world over the next twelve months. MongoDB has a yearly event too, MongoDB World, but having these local, smaller, conferences provides them with more opportunities to reach their customer base, provide training, and announce new product features.

The MongoDB.local San Francisco was held in the fashionable Westfield Centre in the Union Square district. It was hosted in the Bespoke coworking and event space and was very impressively done. It was comfortable and spacious. As is required for any tech-related conference, they provide free Wi-Fi access. It was capable of keeping up with all of the devices throughout the conference. Even during sessions which required attendees to utilize their laptops.

There were three different rooms being utilized for various sessions and was able to handle the crowds fairly well. Some of the sessions were pretty crowded but that didn’t impact the capability to impart a variety of topics in a professional fashion.

There were a wide range of topics covered and skill levels of the talks. MongoDB also brought in experts from a wide range of their company departments to deliver talks and meet customers. CTO Eliot Horowitz was there to give the morning keynote address and covered many of the features upcoming in the soon to be released 3.6 version of the product. Some of these new features include charts, updates to their BI Connector, enhancements to the $lookup operator, change streams, retryable writes, security improvements, Atlas updates, just to name a few. There was also a great demo of their Backend-as-a-Service offering, Stitch.

Prior to the keynote, there were a couple of jumpstart sessions to get provide attendees new to MongoDB the opportunity to level set and get on the same page in terms of vocabulary and concepts. Jay Gordon of the Developer Advocate team gave a great Your Introduction to MongoDB talk to introduce folks to the MongoDB world. Sig Narvaez provided an Introduction to Schema Design as a jumpstart session to, yes, talk about some schema design basics.

After the keynote address, multiple break-out sessions took place. The slides should be available online soon, so I won’t go into great detail. However, the talks by Steffan Mejia on security, ETL techniques by AndrÃ© Spiegel, Spark and Machine Learning from Bryan Reinero, and the last session of the day on the Aggregation Framework from Asya Kamsky were all exceptional talks.

I was also fortunate to be able to meet in person some other great people from MongoDB. The Vice President of Engineering, Education at MongoDB, Shannon Bradshaw, was at the MongoDB University booth answering questions about their content and certification program. It was great hearing about some of their planned upcoming course offerings. Chief Marketing Officer (CMO) Meagen Eisenberg was fun to share stories about being owners of new puppies. It made me appreciate only having one to her two. 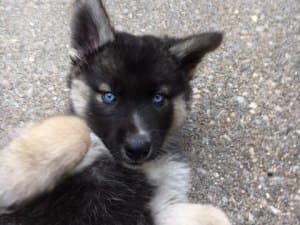 Finally, I got to meet Francesca Krihely of the Developer Advocacy team. Ms. Krihely has been a huge help to me personally over the years with MongoDB User Group establishment. She has provided lots of resources for speaking engagements, support, and is a wealth of MongoDB knowledge. Definitely a great contact to have in the MongoDB world.

In addition to Bespoke, several companies attended the event as sponsors. I can’t give them all enough thanks for coming out and helping to support the MongoDB community. The least I can do is to name them and provide their web links.

” were all part of the “official” offerings. If you were willing to answer a few questions from a survey you could get a logoed Moscow Mule Mug 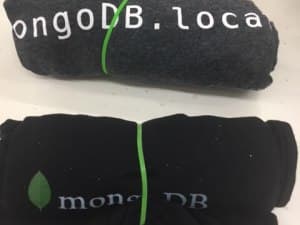 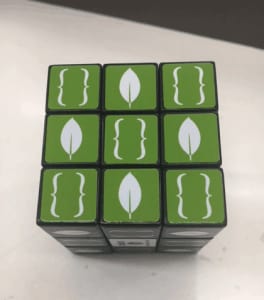 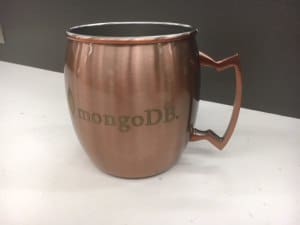 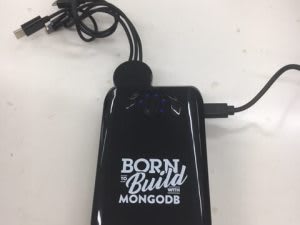 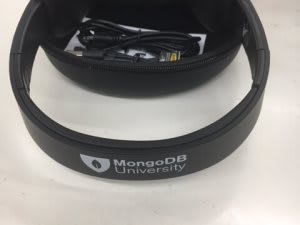 To wrap it up, it was a great day of MongoDB knowledge and learning. Aside from some wildfire smoke issues at San Francisco International Airport causing flight delays, it was a day well spent. I’m looking forward to attending another MongoDB sponsored event soon.

There are a few MongoDB specific terms in this post. I created a MongoDB Dictionary skill for the Amazon Echo line of products. Check it out and you can say “Alexa, ask MongoDB for the definition of a document?” and get a helpful response.

How to import csv data in mongoDB

Upload CSV, parse rows and save each row to MongoDB (using Mongoose) in an Express server