With the PlayStation Showcase 2021 behind our backs, I, just as many others, was excited to finally get the first look at the new God of War titled "Ragnarök". At the next day after watching the showcase a strange feeling settled in my heart. A feeling that the new beloved title may be disastrous.

To understand my worries, first you need to understand my biggest critique of the previous God of War game, which was widely praised and well-perceived by both critics and gamers. Looking back at it, I couldn't help but notice how a single element of the game introduces so many flaws into otherwise great action experience. That element is RPG.

Adopting parts of RPG mechanics has become widely popular in action titles in the recent years. From dressing up your assassins in the Victorian era to deciding which perk Geralt of Rivia should level up before going on his next hunt—elements of RPG gameplay has soaked into other genres in many shapes and forms. Needless to say, sometimes this conjunction is far from perfect. In some cases, it straight ruins the game, being a burden rather than an engaging and captivating elements of the gameplay.

The latest God of War game featured prominent RPG elements like character armor and weapons, and also the skill tree. 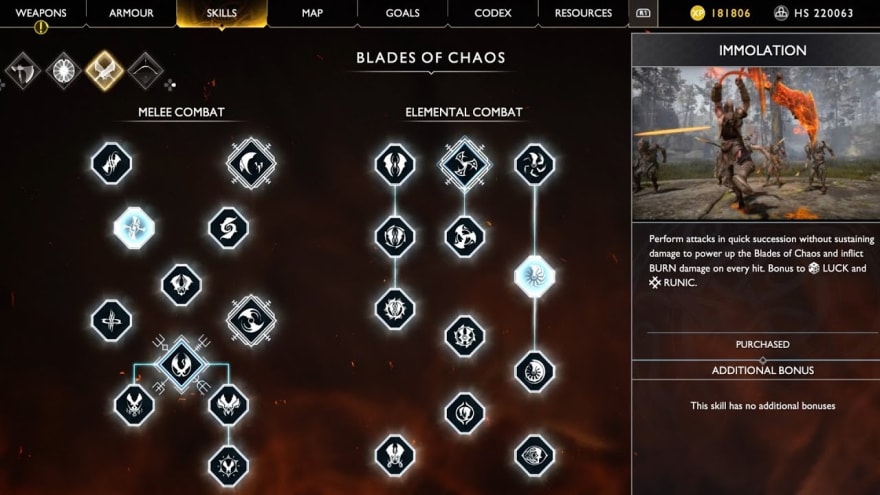 A skill tree in the God of War (Source).

I am convinced that these elements ruin the game and, moreover, don't belong in action titles in the first place. A strong statement, I know, but let's dig a little bit deeper to see what exactly these RPG elements mean for the game.

RPG is an incredibly popular genre with dozens of renowned titles, gigantic fanbase and stylistic variability. Perhaps the biggest thing that makes this genre stand out is subtly placed right in its name—R (role). The ability to role-play, meaning playing your character in a role you see fit, brings an incredible sense of wonder and personalization.

The thing that makes action games unique is in the genre name as well. It's action. Intricate, thrilling fighting scenes, blood-chilling dialogues and character interactions, and just a bit of sprinkle of epic on top. Action games are known to be huge, vibrant, and flamboyant. Such degree of excitement is usually achieved by pre-defined, mostly linear storytelling, masterfully written and orchestrated like in a big blockbuster movie. While this allows game designers to balance between the unstoppable epic and the intermissions of peace, it takes away any room for variability, any room for role. Try to remember an action game where your decisions influenced something, or a game where you even had to make any decisions. Most of the times playing such games would feel like watching an interactive movie (and it's great) rather than crafting a unique novel-like story using your character as an ink pen.

I think the main reason to add RPG elements into an action game is to compensate for a short and uninteresting gameplay loop. What can be better than taking a bunch of weapons, armor, perks, all color-graded into perfection, so that the player spends a few more hours in a game that already offered everything it could in the first hour of playing?

More often than not, RPG elements in action games simply fail and feel out of place, dragging the gameplay away rather than complimenting it. I think that happens because those RPG elements are designed to come hand-in-hand with role playing, which is absent in action games. Moreover, such incompatibility often births a ludonarrative dissonance, ruining the immersion that any game strives to create.

Let me give you an example. Imagine that during one of your world-wondering sessions, your abstract Geralt had stumbled upon an ancient chest. You opened it and found an incredible set of armor, perhaps the best in the game. You feel joy as the next shiny thing lands in your character's inventory. Time passes and you, eventually, reach the next "story" moment—a cutscene. You stare at the polygons on your monitor as they, suddenly, grab your Geralt and throw it against the wall, rendering him half-dead. Wait, what? you exclaim. Not a single living soul in the game could've beaten you while you wear that armor set. But the cutscene does beat you. Because the cutscene is destined to happen. You accept this as a game detail and head on to find yet another chest with jaw-dropping items that change your gameplay upside-down but have zero effect on the story you're trying to play.

Role in God of War

When you purchase God of War you're likely expecting to play as a god-crashing brute named Kratos. Although the latest title has opened him up from a rather unconventional (yet great) sensitive side, you'd still be right to expect an occasional ass whipping here and there, using the might of the God of War. In other words, you expect a certain gameplay based on the game setting and characters. I don't think anybody has tried playing a stealthy Kratos. Partially, because it's against the already written character. Mainly, because the game won't allow you to. Don't be deceived, there is no role in God of War, as you've taken the role of Kratos from the moment you downloaded the game.

As I've said before, taking on a pre-defined role is an inevitable pre-requisite of a good action adventure game. As I've also stated before, adding RPG elements to a role-less game is a terrible, pointless idea, which is likely there to mask the lack of gameplay than anything else. That's exactly what happens with God of War. 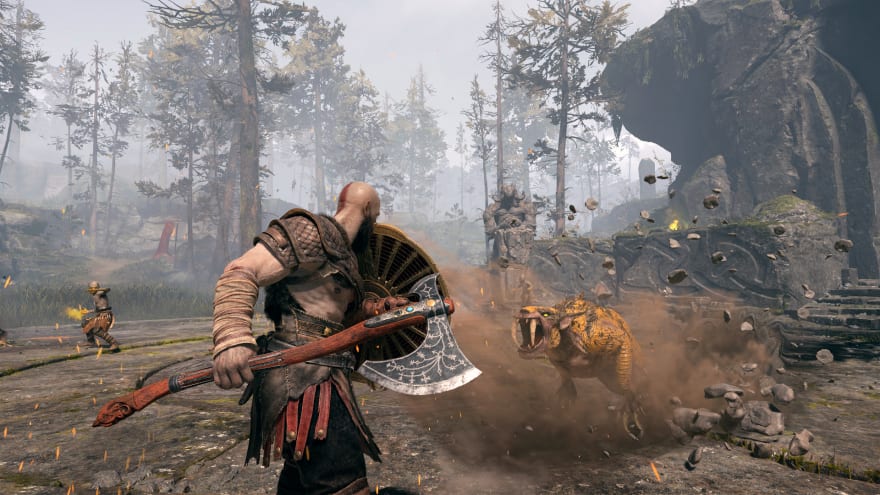 I challenge you: take a clip of Kratos fighting enemies at the beginning of the game and put it side-by-side with him fighting enemies at the end of the game. You'll be amazed how both fights are, well, identical. The enemy colors and skins may change, but there are still about 3 enemy types in the game. Kratos' may shove off with a few new moves but they hardly have any significant impact on the battle, adding mainly in choreography and style than making an actual gameplay difference. Turns out all those chests and items were there only to fake you feeling engaged, when in actuality Kratos was moving from point A to point B as the story foretells, regardless of your actions. RPG elements were now complimenting the game, they were saving you from feeling bored.

For a moment, let's imagine God of War without chests, weapons, armors, skills. We will still be left with a bunch of gaming aspects:

I think most of the praise that God of War received was related to its story and, specifically, to how it was told. 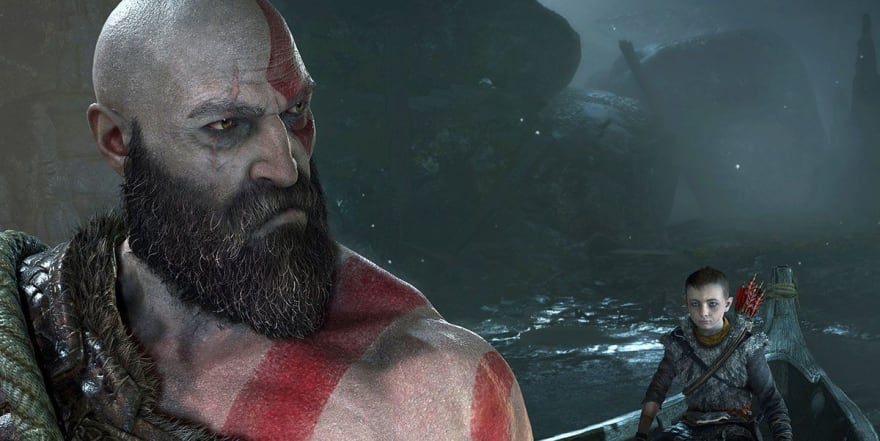 The plot itself is a classic travelogue with close to no things to surprise you. The main strength of the story, and also the main thing that the developer team did incredibly well, was the character development during that story.

Once the item grind is gone, the combat and exploration have almost nothing else to offer. Enemy types are extremely scarce, while the world is, although vast, feels and de-facto is a classic action game world. These two aspects of the game are weak and no amount of armor or skills can make them better. That'd only mask the problem, not solve it.

How to solve it

The biggest mistake I think the developer did was betting too much on the RPG elements in the game. I understand they were supposed to engage the players and gift them the sense of progression, but they do the opposite, dissolving the gameplay with the needless search for gear (that Kratos has no use for story-wise), living in the limbo of the same chest opening animation.

Instead, they should've focused on what makes an action game stunning: progression through story, not gameplay. Instead of giving me a new armor in a box, let Kratos tear that armor off an important boss, and do so by his intentions, not mine (player's). Instead of letting me press a mindless "+" next to a skill, let an encounter with an NPC teach Kratos that skill, making me feel like a journey that the protagonist undertook to learn it as opposed to a new way to swing an axe magically appearing in the hero's memory.

And I believe the team understands that. The appearance of his twin blades in the second part of the game was phenomenal. Yes, they did extend your combat capabilities, but I'm referring to how their reveal was handled. Kratos retrieved them from his hideout because it was a logical move in the circumstances that the story dictated. Pre-defined story, pre-defined Kratos, pre-defined blades. And it still worked wonderfully because action elements will always work in action games. 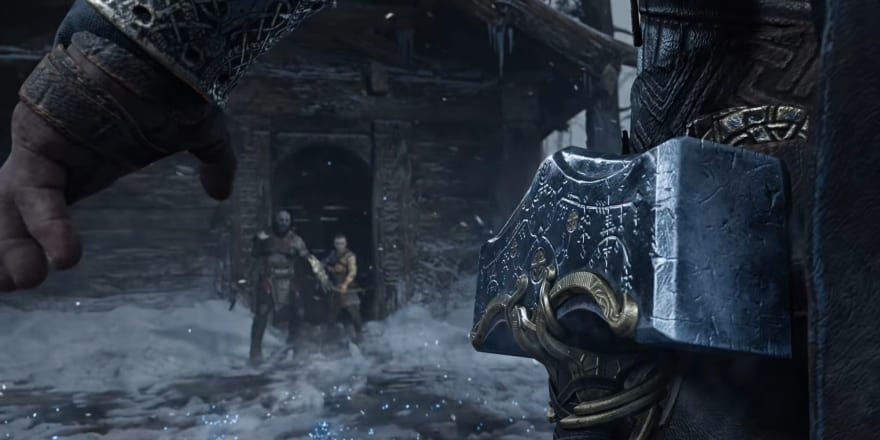 I hope that the next God of War advances the combat and the world, leaving the RPG elements aside, if not abandoning them altogether. I don't need to feel variability from gear in a game where I don't expect variability. I honestly hope that they spend the budget they could allocate on improving weapons and skills on extending the world, crafting more cinematic moments, and, for God's sake, finally adding some nordic Gods to interact with.

Once suspended, kettanaito will not be able to comment or publish posts until their suspension is removed.

Once unsuspended, kettanaito will be able to comment and publish posts again.

Once unpublished, all posts by kettanaito will become hidden and only accessible to themselves.

If kettanaito is not suspended, they can still re-publish their posts from their dashboard.

Once unpublished, this post will become invisible to the public and only accessible to Artem Zakharchenko.

Thanks for keeping DEV Community 👩‍💻👨‍💻 safe. Here is what you can do to flag kettanaito:

Unflagging kettanaito will restore default visibility to their posts.