AWK is a command-line programming language primarily oriented to text and files processing - some might call it a tool -, simple yet elegant continuous lines of code can replace multiple lines of a more robust language like java or node without losing their intention.

In essence, AWK code is so simple that you can just throw it away after the execution or once your program has finished its work.

But there is so much more than that; considering the constant need to process data files, once you have started with AWK, you will stop building complete programs to process CSV or log files for faster and more straightforward with a couple of instructions

But the real potential of AWK is still beyond simple operations. With the help of control statements, loops, switch functions, this command-line tool is closer to a programming language hand to hand with multiple file processing operations to make our lives even simpler

Why is relevant today?

In a generation of powerful and versatile programming languages, sometimes we engineers tend to overcomplicate problems, most commonly because of lack of knowledge in other options, so think about how many times have you develop a small Python, NodeJS, or Golang script to read a huge CSV file, or even build a small JVM-oriented language utility with the language of your choice and without even realizing already develop multiple lines of boilerplate (useless) code.

The same but with AWK

And you could create more examples to explain the difference between creating scripts with AWK and with any other language, but also it is pretty performant in comparison with other 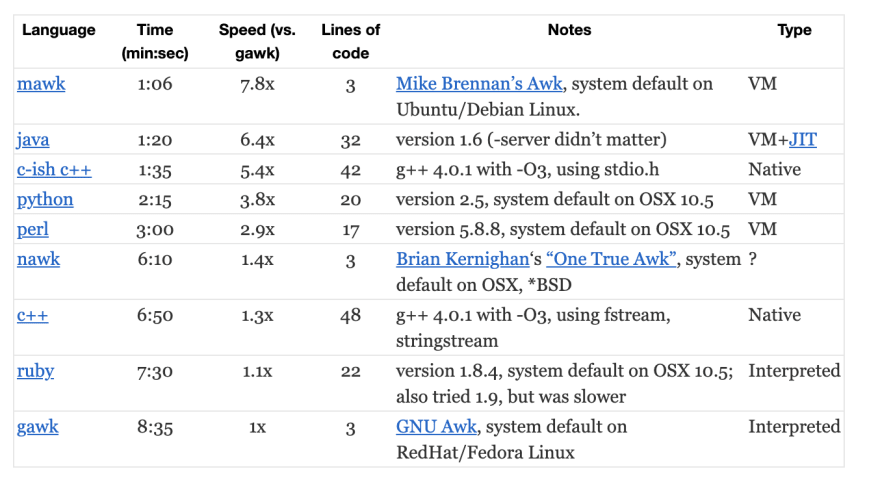 AWK and its variations' performance measurements 1

As you can see, this old-school language (AWK was created initially in 1977) could outshine some of these more robust and modern languages in some tasks, and learning it might give you a new tool you didn't even know you want to have.

Let's start by mentioning that AWK is in every Linux and macOS distribution (how cool is that?); for Windows, you have to install it (but I am pretty sure it cannot be that hard, right?).

How to know what version of AWK you currently have installed?

And now let's start with the basics; AWK commands' structure is pretty simple; however, there are some tricks to it, especially if you want to use it for actual text processing, the basic command could be described in this way <condition> { action } where condition is optional as we saw in a previous example awk '{ print $0 }' example.txt while the action is the operation you need to execute.

For the conditions, there are only two types of conditions, BEGIN and END, and they also can have actions, for example, consider BEGIN as the entry instruction where you can enable, disable or configure different variables within the script run execution, for example, if you want to change the delimiter character from the default space (' ') to a semicolon (;) you can add something like at the beginning of the script BEGIN { FS= ';'}.

END, on the other hand, will always be at the closing statement and can be used to execute any finishing commands after the main body has been completed, for example, printing final variables' values:

AWK also provides the functionality to create Arrays (and operations built-in to manage them) and multiple other data types that we won't be discussing in this post because it might take a couple of hundreds of lines. Still, you can find a good description of them here, so please take a look if you are curious to learn more.

Example of array operations in AWK:

And in case you are thinking how powerful this is and like me trying to take it further to create small AWK powered "apps" to do the monotonous tasks while wondering how can you verify if what you are coding is valid, you can execute any number of unit tests for shell scripts, and therefore, AWK scripts using shunit2

As mentioned a couple of times during this post, AWK's main objective is to process data, which could mean data in files, lines provided command output, or any other form of input data, but let's start simple.

Opening a file and reading the data

From the previous example AWK, we can notice some things like how AWK uses indexes to split the data provided within the file; these indexes are created using the delimiter, which by default is the blank space (check the example in this post on how to define a new delimiter)

Using $0 will print the whole line, while using the sequence generated based on the number of columns will give you control of the data.

You can also straightforwardly concatenate strings:

AWK can search information within the provided input, and one way is using regexp.

Another searching mechanism is using control operations like if, for example:

Finally as usual in any programming language, variants tend to appear with time, and AWK was not the exception; what could be considered the most important (according to me) are the next.

Of course, there are other multiple variants out there, and you won't have any trouble finding them.

As you can see, AWK is an excellent flexible and robust command-line tool, which takes a while to ramp up to, but once you get the basics is pretty simple to use and explode its potential.

In the next post, I will go deeper into different and more complex scenarios and examples; let me know if you have any questions or comments or want more specific related content.

Once suspended, kh40sz3r0 will not be able to comment or publish posts until their suspension is removed.

Once unsuspended, kh40sz3r0 will be able to comment and publish posts again.

Once unpublished, all posts by kh40sz3r0 will become hidden and only accessible to themselves.

If kh40sz3r0 is not suspended, they can still re-publish their posts from their dashboard.

Once unpublished, this post will become invisible to the public and only accessible to Sergio Marcial.

Thanks for keeping DEV Community 👩‍💻👨‍💻 safe. Here is what you can do to flag kh40sz3r0:

Unflagging kh40sz3r0 will restore default visibility to their posts.