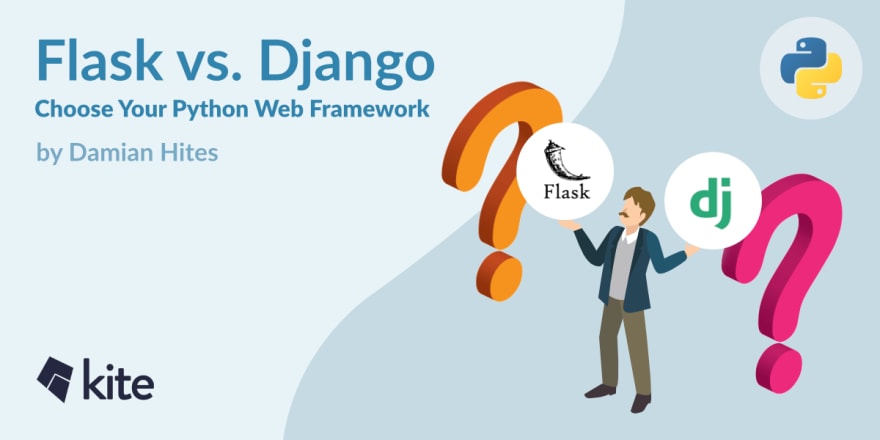 According to the 2018 Python Developers Survey, Flask and Django are, by far, the most popular web frameworks for Python developers. You’ll hardly go wrong with either framework if you’re deciding which one to use for a new web application. While it’s up to you to figure out which one works best for what you’re trying to accomplish, there’s a few major differences you should be aware of when making the decision. Regardless of which framework you end up using, both are very well documented and widely used, so they have ample active and supportive communities. So, without further ado, let’s take a look at what each framework offers and highlight some of their differences and similarities.

Flask and Django are mature, extensible web frameworks that, at their core, offer similar functionality in handling requests and serving up documents, but differ in their scope of responsibility. Most of the differences between the 2 frameworks stem from this different approach although some also stem from some different core design decisions. Here is a short list of key differences that might impact your decision:

Read more on the Kite blog!

Once suspended, kite will not be able to comment or publish posts until their suspension is removed.

Once unsuspended, kite will be able to comment and publish posts again.

Once unpublished, all posts by kite will become hidden and only accessible to themselves.

If kite is not suspended, they can still re-publish their posts from their dashboard.

Once unpublished, this post will become invisible to the public and only accessible to brendan.

Thanks for keeping DEV Community 👩‍💻👨‍💻 safe. Here is what you can do to flag kite:

Unflagging kite will restore default visibility to their posts.