Here's an exchange I've had on a few occasions when discussing a new
web app project: 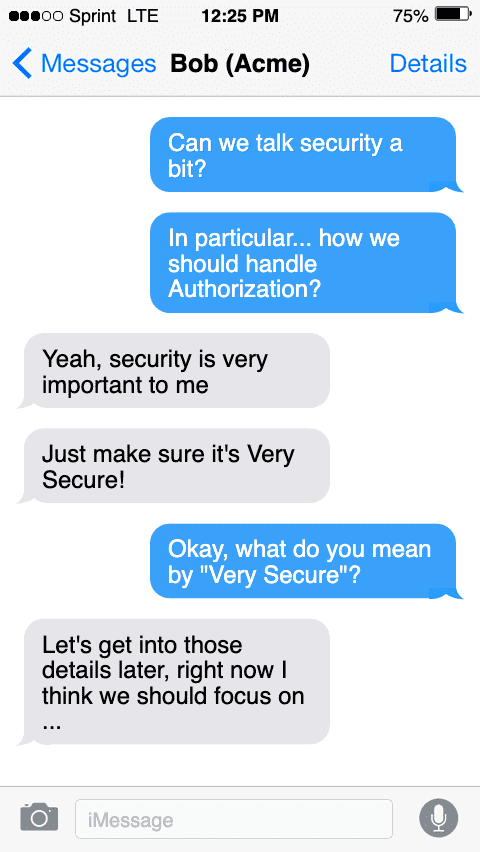 Ok, I can't blame Bob for not wanting to talk about security and
authorization, it's not interesting or fun, however dodging these types of
questions can leave us, developers, in a tough spot.

So what do you do in a situation like this, where the details are vague, but
you've got to start implementing something?

Well, you need to be careful, because you're facing a couple of big risks.

Here's my suggestion, for dealing with authorization when the requirements
are vague.

Choose an approach that:

So what approach is simple and well understood?

This would have to be Role Based Access Control (RBAC), which is been around
for almost 3 decades. RBAC doesn't solve every authorization problem you
might have, but it is relatively simple, and well understood.

So what's the most widely adopted approach?

Well, that would have to be Role Based Access control as well, in fact, most
larger businesses use some form of Role based access control, in the systems
they use.

It means, choosing the solution that takes ~20% of the effort, compared to the
more sophisticated options, yet it covers ~80% of the use cases you have.

Check out the above free screencast to learn more.

Authorization In Elixir & Phoenix with pow and pow_assent

Elixir Überauth: how to keep state between request and callback?

GraphQL Authorization with Hasura: How to prevent mutations after a time interval

Once suspended, knowthen will not be able to comment or publish posts until their suspension is removed.

Once unsuspended, knowthen will be able to comment and publish posts again.

Once unpublished, all posts by knowthen will become hidden and only accessible to themselves.

If knowthen is not suspended, they can still re-publish their posts from their dashboard.

Once unpublished, this post will become invisible to the public and only accessible to James Moore.

Thanks for keeping DEV Community 👩‍💻👨‍💻 safe. Here is what you can do to flag knowthen:

Unflagging knowthen will restore default visibility to their posts.