I so excited to show you very young, but simple, fast, safe & compiled programming language called V (or vlang for Google Search bots).

Objectives of the article

No, Alexander Medvednikov (author of V programming language) do not fan of "V for Vendetta" movie or Vue.js! But it's very interesting story:

Initially the language had the same name as the product it was created for: Volt. The extension was ".v", I didn't want to mess up git history, so I decided to name it V :)

It's a simple name that reflects the simplicity of the language, and it's easy to pronounce for everyone in the world.

Clear and simple, uh? What if I tell you that this code can be written in even shorter form? If your program is only single file (all code in one file), V allows you to drop fn main() {...}.

Yes, this is a valid V code too!

Please note: this article was written when V version was 0.1.24.

V is written in V

The entire language and its standard library are less than 1 MB and can be built in less than 0.6 seconds.

V compiles between ≈100k and 1.2 million lines of code per second per CPU core (without hardware optimization).

As fast as C

Minimal amount of allocations, plus built-in serialization without runtime reflection. Compiles to native binaries without any dependencies.

Similar to another languages

If you work with C, Go, Rust or JavaScript, you're ready to write code on V! Don't trust me, read program code near and answer "what does each line do?":

This program go to external HTTP server and return UNIX timestamp or print failed to fetch data from the server. OK! We set to t variable normalized date and time by standard V library time and print result.

Simple to read, easy to write and can be learned in less than an hour!

The V Package Manager (vpm) — it's package management tool similar to NPM by Node.js, Cargo by Rust, Go Modules and many more.

UI is a cross-platform UI toolkit written in V for Windows, macOS, Linux, and soon Android, iOS and the web (JS/WASM).

V UI uses native widgets on Windows and macOS, on all other platforms the widgets are drawn by V UI. 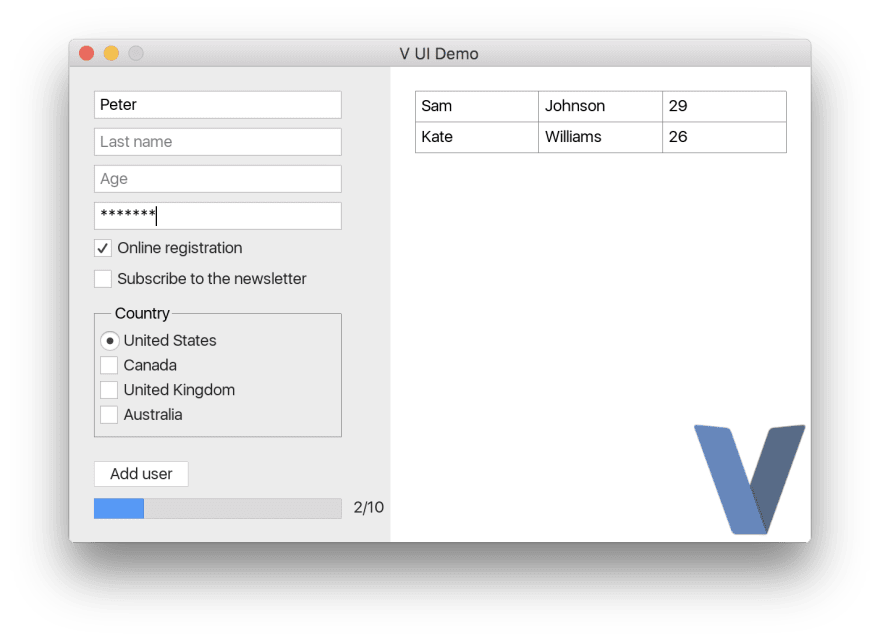 Okay, time to try V on your computer!

On Windows, make means running make.bat, so make sure you use cmd.exe.

For update V to latest version, simply type on console: