Do "Cannot find module Runtime.ImportModuleError" errors have you down?

I honestly thought one of the big selling points of AWS Lambdas were that they were super fast to spin up. But what is a NodeJs method without some npm/yarn dependencies? Kidding, but I was disappointed to find out that there wasn't an easy way to run npm install and keep editing my handler function in the AWS Lambda code editor.

There is a way: layers. Using layers in Lambda functions allows for importing NodeJs dependencies via the AWS code editor UI. These are the steps:

The goal of this step is to end up with a zipped archive of the node_modules folder with just the dependencies you'll need for your lambda.

Start by creating an empty directory named nodejs and then run npm init inside of it by running these commands line-by-line:

Once you have the directory, install dependencies that your Lambda will need using npm i --save ... (I'm using haikunator as an example):

Then require/export the dependencies in the main file of your project. Do this by writing exports.exampleDependency = require('example-dependency') for each dependency you have in the project.

You can just write the export statement in the index.js file directly, or run the below statement via CLI (of course substituting haikunator for your own dependency).

That's the hard part! Now you need to zip up the folder with index.js/ package.json/ node_modules. This is what your directory structure should look like before it is zipped up:

Once you've zipped the files, go to Lambda > Layers in the AWS UI. Create a new layer (independent of your Lambda function - that part comes later) named whatever you want with Node.js as the compatible runtime. Upload your nodejs.zip archive as the layer code. 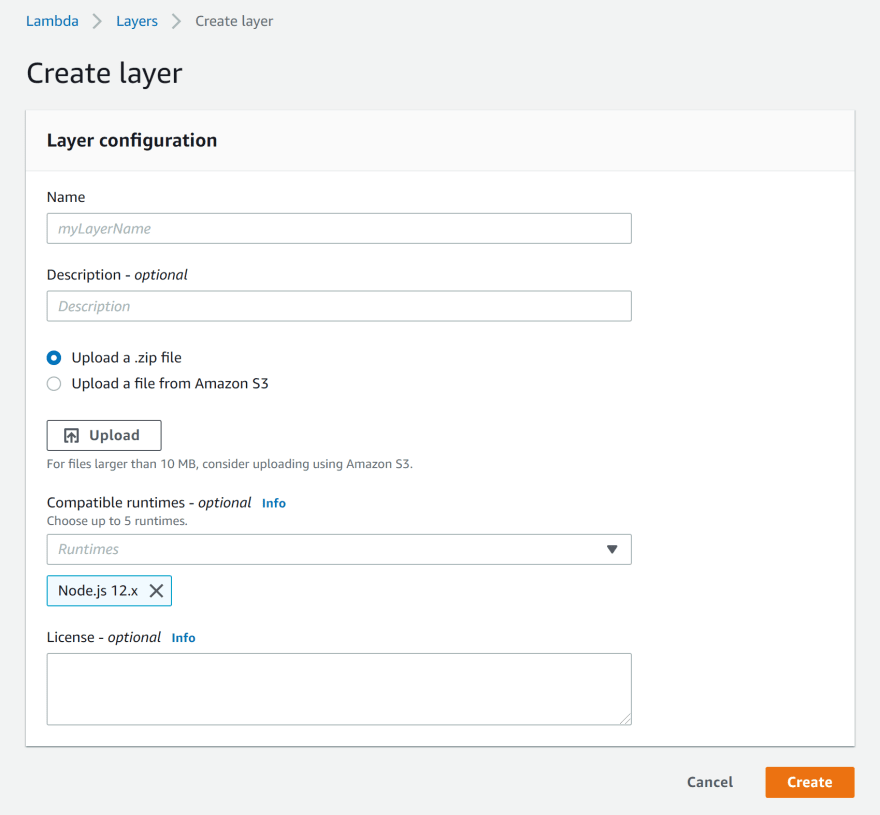 This is the last step and is the part that links the dependencies to your Lambda. Either create a new Lambda function or navigate to an existing one. Click on "layers" in the designer section of the UI and go to "Add a Layer."

The Add Layer screen will show something like the below. Choose Custom Layers and the layer created in the previous step (the one where nodejs.zip was uploaded) will appear in the dropdown. Click "add" and you're good to go! 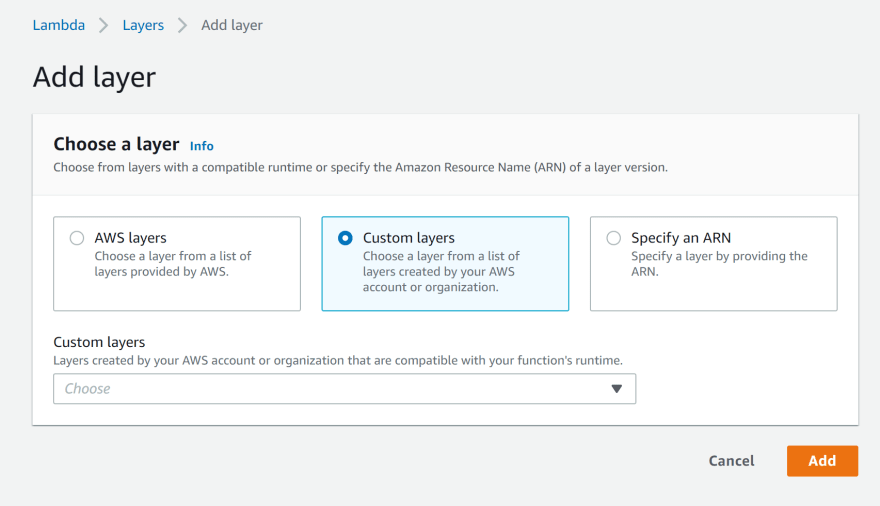 Now the npm/yarn dependencies are available to use in the Lambda code editor.

Quick tip: if you followed the steps and named the zip file as directed, dependencies can be accessed via require('dependencyName').
Otherwise, access your dependencies via the /opt/nameOfZip path. For example: if you uploaded myDir.zip, use require('/opt/myDir')).

Here is my example code living in the Lambda function:

That's it! Update Press the Deploy button to your heart's content and update code in the AWS editor. Happy layering!