If you already know the basics of linked lists, read on. If not, try starting with my “linked list basics” articles:

Now, we want to reverse the links of the list so that it looks like one in green below

You see that in the picture above, our green linked list has been reversed. 5 is now the head and points to 4. 4 now points to 3 and so on. 0 is now the tail.

Well, you might guess that to reverse our original list it will involve each node’s “next” property. Yes, that’s right. The tricky part is that when we reverse a node’s “next” property and have it point to its previous node, we’ll lose reference to the former next node. Here’s what I mean:

Let’s just take another linked list. This time with just 3 nodes: 1, 2 and 3. We want to take 2’s “next” property and point it at “1”. Below I’ve circled in pink the arrow representing the “next” property we want to reverse 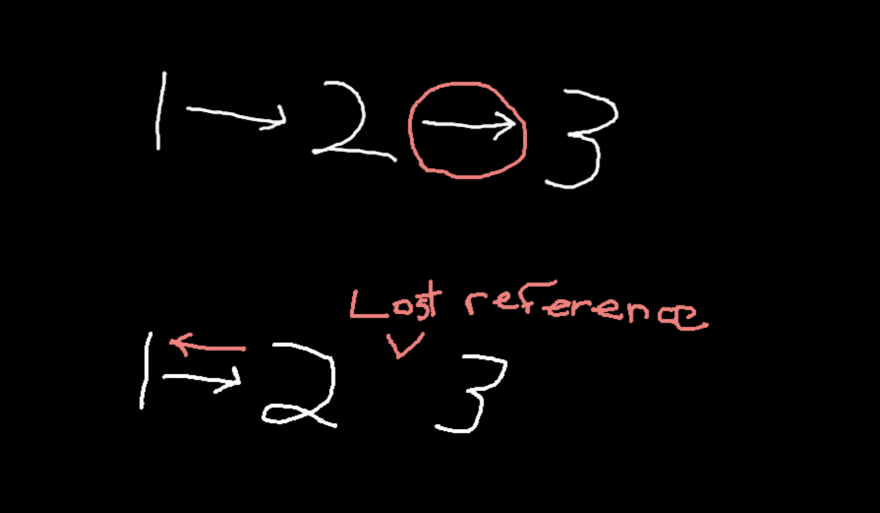 So how do we avoid losing references when reversing a linked list?

To illustrate what we’ll be doing, I’m going to use a picture and start in the middle of the list. It will be easier to visualize that way. (Yes, when we get to the real code we’ll start with the head of the list. Also for now, don’t worry about edge cases.)

Let’s go back to our original white linked list with 5 nodes:

There are just 4 steps to solve this problem:

We still just one more pointer, a “P3” to point to the node after our “P2 node”.

Above, you’ll see in pink that I’ve reversed P2’s “next” property . P2 now points to P1, like we wanted.

So now what? How do we keep traversing the linked list?

We’ll have to keep moving the pointers. In fact there are just two more steps to go to finish the main logic!

Above, you’ll see I’ve shifted P1 to its new location

There you have one iteration of our traversal of our linked list.

Before we go to the code, however, I want to show you how P3 gets shifted:

We just did one complete iteration in steps 1-4 above. We’re now ready to start our second iteration. Let’s go back to just step one. In step one, we set P3 to P2.next like so:

You’ll remember we had already shifted P2 to P3’s position in step #4 above. Therefore, we can set a new P3 to the shifted P2’s next property.

Now to the Code

Just a reminder before we start coding.

That P2 pointer is our “star” pointer and our code will be constructed to accommodate it.

I should start adding a discussion of space and time complexity.

In this algorithm we have a time complexity of O(n) since we’re just traversing the list one time.

Space complexity is a cool O(1) since we’re doing all our operations in place. We’re not creating a new linked list or other object, for example, which would have taken up more space in memory.

And there you have a solution to a popular linked list interview question. Now you can knock ‘em dead!

Have fun and
Keep coding out your dreams!

Getting Started with Vite 2

a short history of svelteKit