Is your technical interview only a few days away? Need to bone up real quick on data structures? Cool, let’s get started! Here’s what you need to know about Singly Linked Lists: 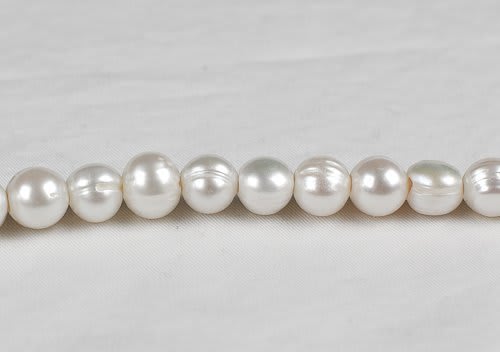 Think of pearls on a string. Each pearl is connected to the next pearl by means of the strong. The string has a starting point, an ending point, and a total number of pearls or length.

Now let’s look at a picture of the the actual data structure:

In “computer talk” each pearl is now called a “node”. The node contains data. That data could be a number, a string, or even a copy of “War and Peace.” Each node points to the next node. That means each node “knows” which node follows it ( as indicated by the arrows in the picture above).

Before we go any further, you may be thinking, “This linked list seems a lot like a regular array.” Well, you’d be right!

Let’s look at a few of the pros and cons of arrays vs. singly linked lists:

On the other hand, linked lists can be stored in small chunks here and there in memory. It’s no problem because each element of the linked list “remembers” through its pointer which element comes after it.

This means that linked lists can be stored in non-contiguous memory locations. Think of how much more you can stuff into poor memory with linked lists!

Insertion and deletion is such a breeze with linked lists. All you have to do is find the first free memory space in memory-- remember it doesn’t have to be contiguous with anything else in the list-- then just readjust the pointers. So easy and quick!

As a JS Developer you might not be expected to know this, but an array actually is allocated a specific amount of memory when it is declared. For example, if you were working in Java, you’d have to declare that your array with the variable name myArr was 10 elements long, for example. Array size is allocated in JS as well, but you don’t see it or have to deal with it.*

So anyway, with an array, memory is allocated as soon as it is declared, at compile time. This is known as Static Memory Allocation.

On the other hand, for a Linked List, memory is allocated at runtime as new nodes are added. This is known as Dynamic Memory Allocation. So this is a much more flexible arrangement of memory allocation than that static ol’ array!

Ok, enough talk. Let’s get down to code. Your interviewer could very well ask you to implement a singly linked list!

All this data structure stuff uses classes, so make sure you’re up on your basic OOP technique.

To code out our Linked list, we’ll actually need TWO classes. The first class will be to create a node (Our linked list will consist of nodes which will point to the next node).

Each node will have two properties: a value (val) and a "next node," or pointer. How ‘bout we call the pointer “next”. Here’s the code:

Next think is we need to construct our second class which we’ll name “SinglyLinkedList.”

We want each instance of our SinglyLinkedList class to have a length, a head and a tail. We’ll start each instance off with a length of zero; and set both its head and tail to “null”. Nothing like a clean start!

Here’s the code. The SinglyLinkedList class is right under our previous “Node” class:

By now in your interview, you’ll be workin’ that black marker like you own the place! You go!!!

*One of the best things I did for my general knowledge as a JavaScript developer was to take a couple of Java courses. It’s like going from driving an automatic stick shift (JavaScript) to a manual stick shift (Java). Just remember to find a quiet street to try it out on!

Check out part 2 where we take a look at the tortoise and the hare...