If you are experiencing error with the xcode 12 New Build System as such:

In this case, one explanation is that your Copy Resources build phase contains one (or more) .xcassets bundle(s). Xcode won't just copy these bundles, instead it will combine them, convert and optimize their content, and create a file called Assets.car that contains the content of all the assets catalogs in your project.

Yet if you integrate other Pod and some Pods also has an asset catalog, exactly the same thing will happen and a second Assets.car file is created and now Xcode has a problem: Two build steps both say they create an Assets.car file. Which one shall win? Which of these two files shall end up in the final application? And what about other steps that depend on this file? After which of the build steps do they have to run? This is a serious problem that Xcode cannot resolve.

There are a few workaround:

(1) Quick and dirty way is to fallback to Legacy Build System (File -> Workplace Settings). However, this doesn't solve the problem but avoids it. Your App still works but someday Apple decided to end the legacy build system you will be in trouble.

(2) Place disable_input_output_paths: true in Podfile, to skip optimisation and always download resources from Pods cleanly every time, since it is not copying bundled assets during build. Adding extra overhead to build doesn't seem optimal, and leads to bad experience during local App development.

(3) Search [CP] Copy Pods Resources in the project build phase. In the output_path list, remove the ${TARGET_BUILD_DIR}/${UNLOCALIZED_RESOURCES_FOLDER_PATH}/Assets.car entry and add this line to the input_path list as dependency instead. This should pass the build. However this is manual step, every time your CI is doing Pod install, you could still see this entry in the output_path list being generated and failed the build.

Well, you could write a script to automate that:

Yet this is a hacky and how long do you plan to stick this in here and wait for xcode or cocoapod to solve it?

(4) In your library project, open Targets' "Build Phases", create a predefined phase named "Copy Files", then drag your *.xcassets to the new phase. 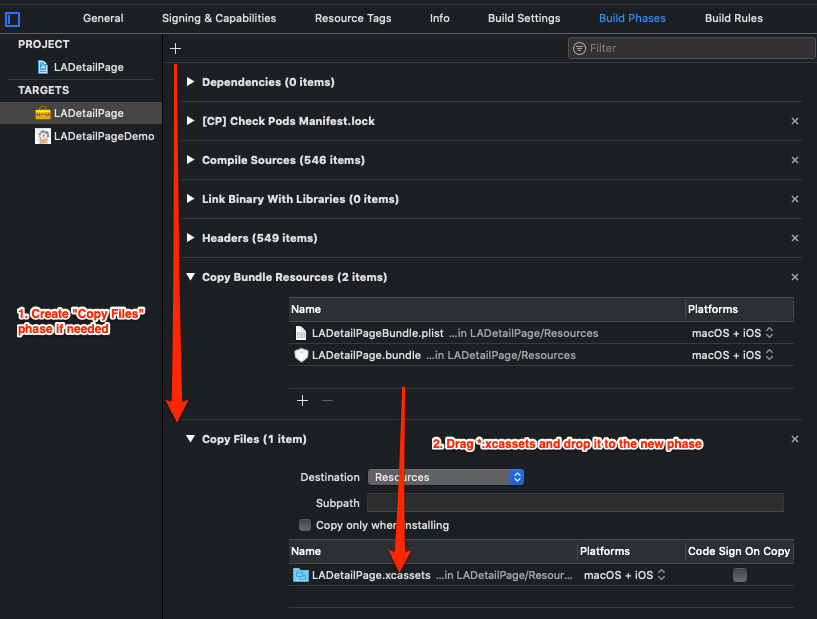 This seems to be much elegant, by separating the copying steps into different phases stop xcode New Build system from yelling. Credits to StackoverFlow

Updated: You may encounter App Icon not displayed issue and in-stability with other image assets. Do check if you choose this approach.

(5) The most proper way to resolve this is to identify the Pods that use the deprecated resources in its Podspec, update them to resource_bundles instead. If the Pod does not have a latter version that come with this fix, you might have to Fork the repo and do the fix yourself. This is bearable short term wise, until official fix is done on the Pod. Since you might not know what could break with the resource_bundles patch on its Podspec.

Once suspended, kylefoo will not be able to comment or publish posts until their suspension is removed.

Once unsuspended, kylefoo will be able to comment and publish posts again.

Once unpublished, all posts by kylefoo will become hidden and only accessible to themselves.

If kylefoo is not suspended, they can still re-publish their posts from their dashboard.

Once unpublished, this post will become invisible to the public and only accessible to Kyle Foo.

Thanks for keeping DEV Community 👩‍💻👨‍💻 safe. Here is what you can do to flag kylefoo:

Unflagging kylefoo will restore default visibility to their posts.