In this article I will show you how you can setup a Svelte project, add basic frontend form functionality with Svelte and then build the project.

If we are considering to building practical piece of UI - I'd propose choose a feedback form for example. Internet already has millions of todo-app tutorials. Our form will have multiple fields, basic validation and option to send data to a backend API using fetch API. 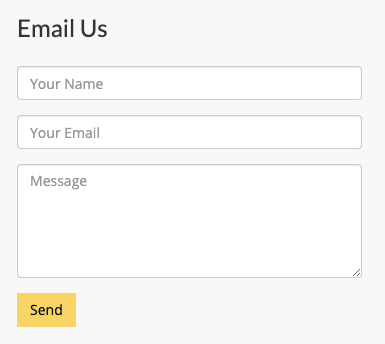 Why Svelte
About 3 years ago Svelte library was created by Rich Harris. One of the biggest differences of that new framework was that it’s not relying on Virtual DOM like popular modern solutions, such as ReactJS or VueJS.
According to its author Svelte however is more than just a framework, it's an another approach towards easier building reactive UIs, language if you will - read more on this in this gist.

We can create a new project using following command:

What we do here is call a degit tool to generate the new project using a template config named sveltejs/template in the folder that you provide as a last parameter.
Since we use npx npx documentation here we are not installing degit into the system, but you can always install it like this

then scaffolding next Svelte app (in this case it's just cloning the template repo) will be faster, just by calling degit sveltejs/template

Ok, so the script was fast to run, let got to the folder and see the structure we have there: 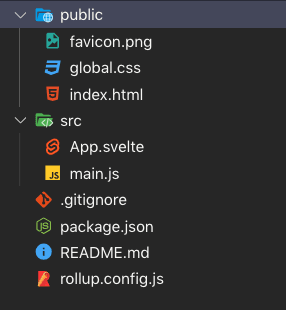 I will be using Visual studio code for further development. We can see we have a single svelte file created, that contains basic code, we have a config for a bundler (Rollup is default, however, you can also use Parsel and Webpack) that is used rollup.config.js and a package.json. Let's check what commands we have in it:

So to start developing we will need to run dev command. What it will do - it'll run in parallel (thanks to special run-p command) the static assets server - sirv public and a bundler in a watch mode: rollup -c -w. This will provide us with live update of the page any code files changes

So as we start we should see such output in the console: 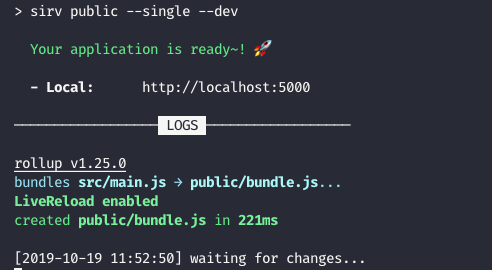 It mean all went well so let's open localhost:5000 in the browser and see what we'll get. You'll see a really basic output which only contains one line of text with dynamic variable {name} in it.

Concerning the other files and app structure the sequence is as follows:

So app instance initialisation code is in the main.js file and since they're pretty simple it looks like this:

During the compilation step it is all consumed by Rollup or other bundler and it wild output it in index.html and /public folder.

Currently our app.svelte file doesn't contain much. So let's get into it and add some UI markup. You can write with yourself or you can copy it from some Bootstrap form samples page.

So here's how your form may look like. No dynamic elements, just HTML markup.

Markup in Svelte is pretty easy, all the CSS, JS and HTML can be combined in one file (same you can do in Vue). All the JS code is between the script-tags, and the component styles are... you guessed it, is in style tags. Good to know that CSS written in svelte files is scoped.

Again, if using Visual Studio code for editing I would recommend to install extension svelte-vscode that will manage code highlighting and many more for you. 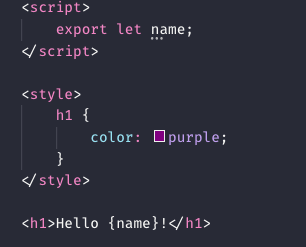 State
What is the most important to do right in modern frontend apps - of course it's the State. It's easy to start building something small ignoring the right approach to managing the state and then find yourself in situation that you need to refactor all the code you recently wrote. Everything depends on everything, unexpected side effects start to appear.
So let's create a simple state object:

It is quite simple but later you may want to put it into Redux or persist in localStorage or what will you.

Let's see what are those:

In the JS logic the validateAndSend function will do the following:

All the functionality that can be separated such as validation and sending data over the network I've extracted to separate /service.js file.

Now if you see that the functionality that we expected is working as it should let's try to run the production build with: npm run build

Look at the time it took to build the whole app. Of course our app is really tiny but still your can see that the overhead for the framework part of the build is negligible in case of Svelte.

It contains one link to the JS bundle and separate links to stylesheets that you may want to use. It comes really handy when you have part of your styles refused from readymade style sheet - like using Bootstrap or material design CSS.

Here's a basic feedback form app that you can build with Svelte.
Hope some of the framework features while reading this article, along with the approaches towards managing modules and state in frontend apps.

All the code is also stored in the separate shershen08/feedbackform-svelte repo . Please have look at it if you'll have any questions.

I'll be happy to answer your questions in the comments or in Twitter: @legkoletat.

How to connect Whatsapp with google sheets?

MDSveX: The bridge between Markdown and Svelte

A Custom date-picker in Svelte

Mikhail Kuznetcov
Have you ever seen anyone "fake" their way into a software development position?
#discuss #career #watercooler
Meme Monday 🦊
#jokes #discuss #watercooler
Why "Do Your Own Research" is terrible advice
#career #money #healthydebate

Once suspended, legkoletat will not be able to comment or publish posts until their suspension is removed.

Once unsuspended, legkoletat will be able to comment and publish posts again.

Once unpublished, all posts by legkoletat will become hidden and only accessible to themselves.

If legkoletat is not suspended, they can still re-publish their posts from their dashboard.

Once unpublished, this post will become invisible to the public and only accessible to Mikhail Kuznetcov.

Thanks for keeping DEV Community 👩‍💻👨‍💻 safe. Here is what you can do to flag legkoletat:

Unflagging legkoletat will restore default visibility to their posts.