This month npm has released a major version of their package manager npm 7. It shipped with support for workspaces.

Why is it big news? Because npm is the only package manager that comes bundled with every NodeJS. To use yarn or pnpm you have to take an additional step and install them first.

Read on and you'll find out how to use npm 7 workspaces in a real-world scenario and learn that using workspaces the npm's way is very different to yarn's.

A monorepo is a term describing a single git repository that contains many projects.

The most common reason to set up a monorepo is to streamline work within a dev team that maintains multiple apps that are using a shared piece of code, for example a common User Interface library.

Imagine a team that develops two React apps that shares some common UI elements like inputs, selectors, accordions, etc. It would be nice to extract that UI in form of React components and prepare building blocks that are ready to use for all members of the team.

Apart from that it's just more convenient to have all your source files opened in a single IDE instance. You can jump from project to project without switching windows on your desktop.

I just want that nice button in my app too

Let's say I want to build two independent React apps called app1 and app2 that will use a common component from a common UI library called ui. And I want both apps to hot reload whenever I edit a file inside the UI library.

By independent I mean that app1 doesn't know anything about app2 and vice-versa.

Below is a setup that is compatible with npm 7 workspaces. 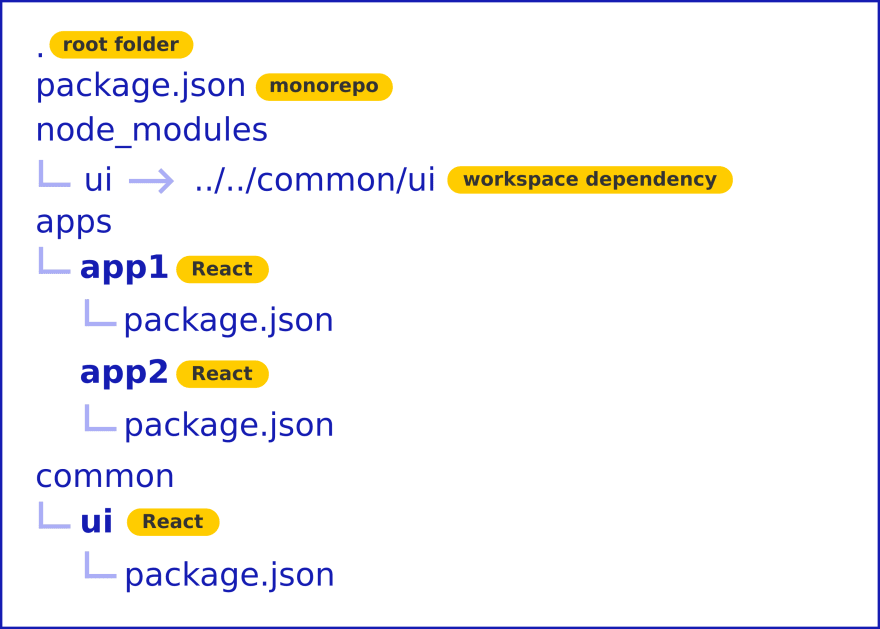 I am prefixing all packages' names with @xyz so they will be distinctive from the official npm registry. Just change it to yours.

This is the most crucial part of the whole setup. Insert below inside your root folder's package.json to set up a monorepo.

The new "workspaces" property lets npm know that I want to track any packages inside ./common folder and automatically symlink them in the root's node_modules when I run npm install.

From now on whenever our React apps will use import Foo from "@xyz/ui" the NodeJS will find it in ./node_modules/common/@xyz/ui that points to ./common/ui folder that contains our library. Perfect! No need for npm link anymore with the workspaces.

Without workspaces the React app would complain that it cannot find a module named @xyz/ui and would start looking for it in the npm official registry.

To test our setup let's share a text from the ui library and import that string into our React app.

and index.js file that will export a string:

Time to import that string into our apps.

To quickly create React apps inside our monorepo. Just use the newly released Create React App 4:

Now you'd think that we need to add our ui library to the app. In yarn it would look like below:

But with npm we don't need to add any dependency at all.

Just go to your App.js file in both app1 and app2 apps and add the below code to display a string from our UI library:

To test it use the below commands:

and from another terminal window:

You'll see the This comes from UI! 1.0.0 text rendered inside both of your React apps!

Now if you'd try to export a JSX component the React apps will complain that they cannot parse the JSX. You need to transpile JSX code from the common UI package first.

You can use a basic Webpack 5 setup:

Import the UIExample component inside your React app using below:

Make sure the UI library is transpiled on every code change:

Run the app1 in a separate terminal window and take notice that whenever you edit the UI component the webpack dev server will automatically reload it with the newest version thanks to the webpack watch running in the background.

Below I'm editing the common UI component UIElement and upon saving both React apps are automatically refreshed with the updated component:

With the newest npm 7 and its support of workspaces it is now possible to have a monorepo without a need of any external tools like @react-workspaces or nx.

Just remember that npm has a different philosophy than yarn. For example you cannot run a script inside a workspace from the monorepo's root folder.

Recognize also that @xyz/app1 and @xyz/app2 weren't defined in the monorepo's package.json workspaces property. Only the modules that will be exported need to be there (@xyz/ui).

The npm 7 workspaces are mainly providing discovery for the modules. I wish it had been emphasised in release notes and that the npm's help examples were a bit more complex. I hope this article fills this gap for the time being.

Check out my gif-css-animation-monorepo repository that shows how I made the animation for this article using an HTML page.

What are AWS credentials?

Getting Started with Docker - Introduction for Beginners

Once suspended, limal will not be able to comment or publish posts until their suspension is removed.

Once unsuspended, limal will be able to comment and publish posts again.

Once unpublished, all posts by limal will become hidden and only accessible to themselves.

If limal is not suspended, they can still re-publish their posts from their dashboard.

Once unpublished, this post will become invisible to the public and only accessible to Łukasz Wolnik.

Thanks for keeping DEV Community 👩‍💻👨‍💻 safe. Here is what you can do to flag limal:

Unflagging limal will restore default visibility to their posts.