TL;DR - I made my own version of Snake! You can play the game here!

While going through Wes Bos' Beginner JavaScript course, the first big project we did was creating an Etch a Sketch (here's my implementation)! It was so much fun, and gave me an idea - I could create the Snake game in a similar way!

If you've never heard of or played Snake before, it's an old phone game where you control a snake. You start off small, and you move around the board and try to eat pieces of food. For each piece you eat, your body grows a little bigger. If you hit the side of the game board or your body, the game is over. It sounds simple, but once your body gets long enough it can be tricky!

Since the Etch a Sketch also involves drawing lines on the screen, I figured I could use the same methods to create Snake! It's something I've wanted to play with making for awhile, but always seemed like too much work. Going through the course exercise made me realize that maybe it was more do-able than I thought!

The real star of this game is the HTML canvas element. This is an element that lets you draw complex shapes on the screen. I had heard of the canvas element before, but really hadn't had a use case for it. But once we used it in the course exercise, it seemed like the perfect "canvas" (get it?? lol) for building this game! This also uses some fairly straight forward vanilla JavaScript.

Holy buckets, I learned a lot while working on this - it turned out to be a bit more difficult than I thought! Here's a few of the little gotchas I ran into.

Setting the lineCap is important

I thought the food style was a good place to start - it's just a single small square that goes to one spot, then moves to a new spot when the snake triggers it.I set my lineWidth and fillStyle for the food, made a little random number function to get a random x and y, and put in the code that (I thought) would show a little square of food on the canvas. Saved and...nothing! This had worked in the Etch a Sketch project - why wasn't it working now?Turns out, you need to adjust the lineCap to be something *other* than the default for a single point to show. If you're drawing a full line it will work without the lineCap adjustment, but for this single point I had to set it to 'square', and then it showed up.

For this game, your snake starts as a single spot, then grows as it eats. The body also needs to stay a consistent length, until the food trigger makes it bigger. So it needs to move to new spots, and maintain it's length.Not really sure why it took me a bit to work out, but in the end I decided the best way to track the snake was to keep an array of my moves, as well as a variable storing the current length of the snake.

Basically, each time the snake moves, the moves array needs to update. It needs to add the new move to the array, and then it needs to remove the oldest move from the array. Then the line can be adjusted from the updated array list. This lets it always show as a certain length, and makes it relatively easy to grow as well!I also made sure to check the length of the moves array - when we first eat a piece of food, our array isn't going to be as long as the new body length needs to be yet, so we don't want to remove anything.

The other part of making the snake body move is covering up or removing the moves we no longer need. I felt like completely erasing and redrawing the snake each move would cause too much jumpiness. So my next thought was to just change the line color to white (the background color) and draw over the old moves. But I kept getting these ghosting artifacts, like it wasn't fully covering up the old moves.This was super weird to me, since the width and placement of the path were the same as before, and (at least from what I could tell) there wasn't a stroke on the path that I might be missing. I solved this by simply increasing the size of the path width to 5 points bigger than the regular snake size, and it covered it completely.

Though, now that I'm writing this, I'm seeing another option that might work nicely! Which ties into another decision I made in creating this...

I had read that separating multiple drawings onto separate canvases and layering them over each other can be better for performance, especially if one needs to be adjusted a lot and one doesn't. I used this technique, putting the food on one canvas, and the snake on another. Since I stored the coordinate values for both and the canvases were the same size, detecting collisions was still easy.What I mentioned and didn't think of until now is that I might have been able to make a third canvas that stored the removed values! Then I could have had that line draw over the removed points in white, and I may not have run into the artifacting issues I had drawing on top of an already existing path. I'll have to test this out later!

I also ran into the importance of setting the correct z index for canvases. I layered the snake canvas over the food canvas at first, and when the snake would run over the edge of the food (if the new food generated next to the tail of the snake), when an old snake body part would be painted over it would also paint over a portion of the food. Setting the food canvas on top prevents this.

Detecting if the snake head has run into one of the game board edges was easy - I know the width and height of the board, so I just check for hitting zeroes or hitting the width/height numbers.Detecting the body hits was also seemingly easy - I had an array of all the locations of the body points, after all. But the thing that always seems to trip me up in JavaScript is searching through objects - and naturally, I was storing each coordinate as an object of x and y values.I thought the .includes method on arrays would work great for this - however, it can't read into the objects, so it didn't work. Turns out, what I needed was the .find method instead!

Using .find, you can look at each point in your array, and see if you have a particular key that matches a particular value. Using this, it was actually as easy as I thought to detect if the current head ran into a value in the body array - just had to find the right JavaScript method to do it!

The last issue I ran into was starting a new game. The game starts automatically when you load the page, but once that game ended I wanted a way for people to start again. So I set up a restart button, and got the board clearing and the necessary values resetting, so you always start from a score of zero with fresh coordinates.But...I couldn't get the game to actually show moves on new rounds! It was the weirdest thing to me. And arrow keys, which had the default event prevented, were now not preventing the default (an arrow key's default is to move the viewport around). Something wasn't right.I stumbled on the answer to this by accident - during one of my attempts, I clicked on the screen, and suddenly the arrow keys were making the snake move! Then I had one of those "ah ha" moments - the canvas must be losing keyboard focus!

Turns out, this was exactly it! I adjusted my start game function to explicitly set the snake canvas to have focus as the last thing. And then everything worked just like I wanted it to. :)

In all, this took me about 7.5 hours to create. Which...feels like a lot to me, honestly, but involves a lot of reading of the canvas specs, troubleshooting various things, and a little bit of styling, documentation, and code rearranging. So all in all, not that bad - and definitely faster than I could have created it a year ago. :) Progress is progress!

There's always room for improvement - I might eventually test out the third canvas idea, and I would like to make it so that once the game starts, the snake moves automatically in the last given direction (like the original does) - but overall, I'm very pleased with how this turned out. :)

You can view the code for the full game on my GitHub here. 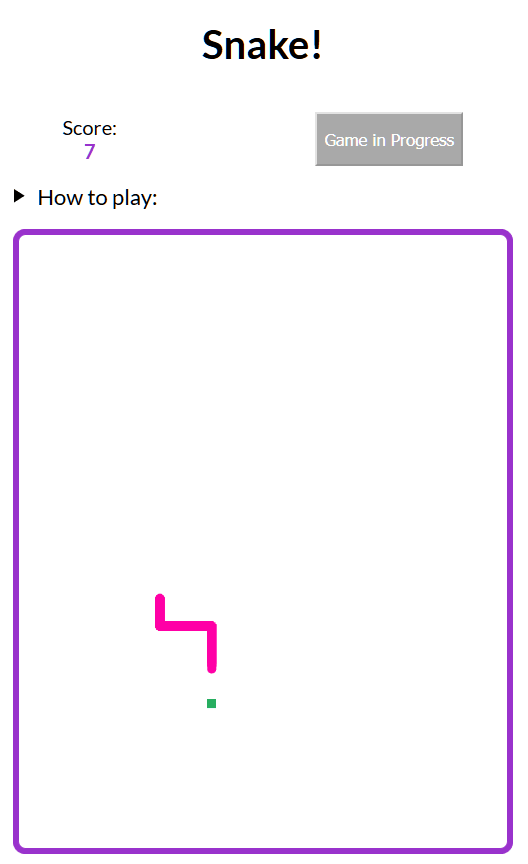 Movies app in 7 frameworks - which is fastest and why?

Is GitHub Copilot a Threat to Developers?

Once suspended, lindakatcodes will not be able to comment or publish posts until their suspension is removed.

Once unsuspended, lindakatcodes will be able to comment and publish posts again.

Once unpublished, all posts by lindakatcodes will become hidden and only accessible to themselves.

If lindakatcodes is not suspended, they can still re-publish their posts from their dashboard.

Once unpublished, this post will become invisible to the public and only accessible to Linda Thompson.

Thanks for keeping DEV Community 👩‍💻👨‍💻 safe. Here is what you can do to flag lindakatcodes:

Unflagging lindakatcodes will restore default visibility to their posts.