Last week we covered how to do a hard reset of your repository. Though they're sometimes necessary, hard resets are a pretty destructive method of rewinding your repository because they alter the commit history.

Today's post will cover the nondestructive rewind, aka git revert.
We'll go over:

The git revert <commit-hash> command will reverse the changes made by the commit hash given, and then create a new commit. This is the preferred method for undoing the changes of a specific commit if that commit has already been push to a shared remote repository because it preserves the commit history.

This is different from a git reset, because a reset will move the HEAD ref to the commit hash given, and drop all the commits after that one. A git revert only reverses the commit that was given and keeps all the following commits and the changes that were made in them. This makes git revert great for removing a bug that was introduced by a single commit without having to redo all the work in the following commits.

How to Revert a Single Commit

To revert a single commit, enter the following git command in the terminal:

You can also pass git revert a reference to the commit that is relative the HEAD ref. So, if you entered git revert HEAD~2, the changes from the third most recent commit would be reversed.

Let's look at an example. I created a local repository with some files whose names match the commit in which they were created, which looks like this:

Now let's say there was some bug in commit A that we wanted to undo but keep commits B-D. We would enter the following git command:

Now if we look at the working directory you'll see that the "commit-A" has been removed, but the rest remain.

How to Revert a Range of Commits

To revert a range of commits, simply enter the following git command in the terminal:

Notice the ^ before the two periods. That caret symbol tells git to include that first commit hash given in the range. And the -n option tells git to not create a commit, but to instead stage the changes in the Staging Index and the Working Directory. This way you can do one commit manually to maintain a neat commit history.

In the same example we used above, lets say we want to rewind to commit A and maintain the commit history. You could do that like this: 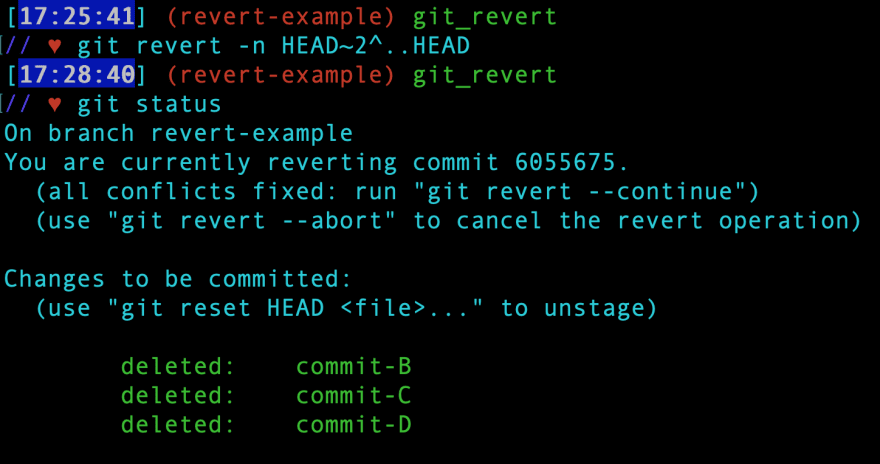 By running git status, we can see that all files added in the commits B-D have been deleted.

Now we just need to commit those changes.

In the git log we see that commits B-D are still in the commit history even though their changes have been reversed.

If we open the Working Directory, we'll see that it has indeed rewound back to commit A.

Why Data structures and Algorithm Interview Questions on Leetcode

Thanks for keeping DEV Community 👩‍💻👨‍💻 safe. Here is what you can do to flag lofiandcode: