Almost four years ago, I was a new TypeScript user, amazed by the possibilities that this freshly learned JavaScript dialect opened up to me. But just like every TypeScript developer, I soon ran into some hard-to-debug problems.

In TypeScript land, those problems usually stem from the programmer's lack of understanding about the language itself.

I'd like to introduce you to one of these early problems I had, mostly because it is related to one of the (in my opinion) most underreported topics in the TypeScript tutorial world: the type scope. It's kind of obvious once you realize it exists, but for me it was a frequent source of confusion when I didn't know about it.

My problem was actually very simple: I was building a library with a bunch of classes distributed over various folders. 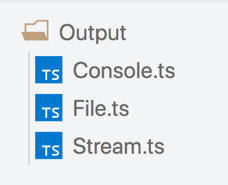 For the library's public API, I wanted those classes to be exposed as a single nested object (e.g. the Console class from Output/Console.ts being available as API.Output.Console).

So I defined some namespaces, imported the classes — and then I struggled. I was just not able to re-export the classes from inside the namespaces. 🤨

First attempt, turned out to be invalid TypeScript:

Maybe I need to import it under a different name. Okay, second attempt:

But unfortunately, whenever I wanted to type hint something with that API object, I got the following error:

...but I exported that member! Why is it not there!?

Hum. Maybe the export const is the problem. I should sprinkle some magic TypeScript keywords over the problem and try export type instead.

So without further ado: Fifth attempt. It compiles! 🥳

Okay, reality check: Does the type hint work? It does! 🕺

...but that joy was short-lived as well. When I tried to create a new Console instance, TypeScript errors were all over me again:

Needless to say that I was pretty fed up with TypeScript at that point.

However, I did not want to believe that there was no solution to my problem, so I went to StackOverflow and, after a couple of days with no answer, I created an issue directly in TypeScript's GitHub repository.

Ryan from the TypeScript team was kind enough to answer my question just within a couple of minutes. To me, the solution seemed pretty obvious and pretty obscure at the same time:

I applied that approach — and it worked like a charm.

Back then, I just accepted that answer and used it in my code. It sounded kind of plausible to me — both, const and type, worked in some way, so I just need to combine them to make both use cases working. But there was a sense of unease in it. Why could I export two things under the same name without producing a big fat compiler error?

It took me some more months (maybe even years) of TypeScript experience to fully understand why this works, but I think that insight might be valuable for others as well, so I'll share it here:

TypeScript has a secret scope.

TypeScript basically maintains a type scope which is completely independent of the variable scope of JavaScript. This means that you may declare a variable foo and a type foo in the same file. 🤯 They don't even need to be compatible:

Now classes in TypeScript are a little bit special. What happens if you define a class Foo is that TypeScript not only creates a variable Foo (containing the class object itself) it also declares a type Foo, representing an instance of the Foo class.

In other words, that single name — the imported ConsoleAlias — holds both the class object and the type declared in Output/Console.ts.

In a nutshell: Because of the independent scopes, it's valid to export a value as well as a type under the same name. And in some cases (like the one above), this is not only valid but necessary.

I hope this helped refine your mental model of TypeScript. 🤓

How to use Zustand in Next js , Typescript & React Project

Once suspended, loilo will not be able to comment or publish posts until their suspension is removed.

Once unsuspended, loilo will be able to comment and publish posts again.

Once unpublished, all posts by loilo will become hidden and only accessible to themselves.

If loilo is not suspended, they can still re-publish their posts from their dashboard.

Once unpublished, this post will become invisible to the public and only accessible to Florian Reuschel.

Thanks for keeping DEV Community 👩‍💻👨‍💻 safe. Here is what you can do to flag loilo:

Unflagging loilo will restore default visibility to their posts.