I often work with the Yocto Project to build custom Linux distributions for a
various range of products. One of the main struggles you can have while working with this tool is managing multiple
git repositories in order to produce a successful build. A new tool called kas tries
to simplify this process; let's see how by building a distribution for a Pine64 board.

First, we must install python3 and pip, together with some other dependencies:

Then install kas; I had a problem with a dependency so I had to install another package by hand

As an example, we can try to build a simple image for the qemu machine which is already contained in the poky
repository. We need to create a special file, kas-project.yml, which will describe how our distribution must be built
and which layers must be included; we will use the file provided by the kas documentation, with some small tweaks.
Create a folder for the project:

Add the following snippet to the project configuration file:

The kas-project.yml file is written in YAML, a minimal markup language often
used for configuration files. It allows us to describe our distribution in a very clear way; in this example we will be
building the core-image-minimal image based on the poky distribution for a qemux86-64 machine. The layer used are
the ones contained in the poky layer, listed in the configuration file. The local_conf_header section allows
us to add any line to the local.conf file in the build folder.

We can now use one of the available kas commands, build:

kas will clone the repositories indicated in out project file (just poky in this case) and start the build process
using bitbake for the distro and machine we set; at the end of the build process we will have a build
folder with the same structure of any Yocto project build.

One other useful kas command is shell. We can run it like

and what it does is it opens a new shell instance with the build environment loaded. We can also provide a custom
command to execute inside the new shell; for example to replicate the previous build command, we could run:

Since we are running through the basic Yocto demo, we can now try to load the virtual QEMU image:

It will prompt for the admin password to create the tap interfaces, then, after the boot sequence, we can login with
"root" (since we enabled debug-tweaks in the project file). I also tried graphic mode but for some reason the
GUI never appears, maybe for some restrictions coming from the kas environment. 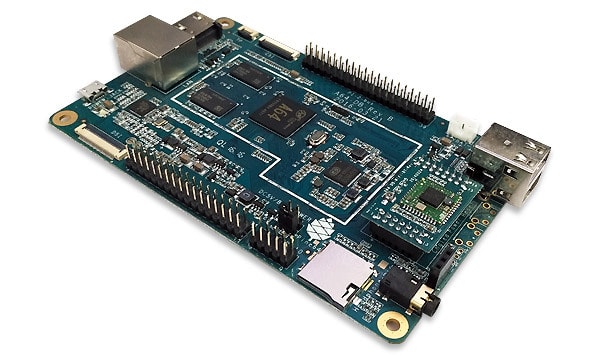 Now let's add some more layers to build an image for a real board, the
Pine A64. Under the "repos" section of the
configuration file, add the following lines:

We can add also one custom layer; it could be fetched from a private git repository, but it can be a simple folder in
the project structure as well:

Create also a meta-custom-pine64/conf/layer.conf file for our custom layer:

We can then add a new custom image creating the meta-custom-pine64/recipes-images/images/kas-custom-image.bb recipe:

Set the image as the build target by changing it in the project configuration file, and add the new layers as well; the
machine can be set to pine64-plus:

The build process can be run again with:

If we boot the board using the flashed SD image, we will have a system with a basic image and an ssh server; this can
work as a canvas for more structured projects.

A small note: at the time of writing there is an issue with U-Boot in
meta-sunxi for the pine64-plus machine; I opened a
pull request to fix that; apply that patch if you want to try to
build the project.

I made a tmux plugin to spice up your terminal 🐧💅🏼

Lorenzo Arena
Enthusiastic developer who likes to stay on the high and low level of programming.
I passed the CPACC exam
#a11y #career #certificate
When can you declare yourself a Full-stack Dev?
#discuss
Thank You DEV 😊
#beginners #codenewbie #discuss #showdev

Once suspended, lorenzoarena will not be able to comment or publish posts until their suspension is removed.

Once unsuspended, lorenzoarena will be able to comment and publish posts again.

Once unpublished, all posts by lorenzoarena will become hidden and only accessible to themselves.

If lorenzoarena is not suspended, they can still re-publish their posts from their dashboard.

Once unpublished, this post will become invisible to the public and only accessible to Lorenzo Arena.

Thanks for keeping DEV Community 👩‍💻👨‍💻 safe. Here is what you can do to flag lorenzoarena:

Unflagging lorenzoarena will restore default visibility to their posts.