On Saturday 18th of January, at Skyscanner offices, in Glasgow, and in other 80+ locations around the world, the Global Diversity Call For Proposals(CFP) Day workshop will take place. The aim of the day is to help people from underrepresented and marginalized groups, to apply to speak at tech conferences with the goal to elevate new ideas and perspectives onto the center stage.
The set up is simple - attendees get access to mentors and resources to allow them to identify a topic, write a proposal and map out the talk. And most importantly, the whole event is free!

The idea came about in 2015 when the organiser of ScotlandJS and ScotlandCSS, Peter Aitken noticed that the number of applicants from varying backgrounds applying to speak at the conference, was incredibly low.

"In 2015, 6% of CFP applicants were from underrepresented and marginalised groups. That needed to change."

At the time, the conference had anonymous voting in order to prevent speaker bias, but when the percentage of applicants is so low, the chances of being picked, are also very low. As a response to that, an idea was born to help people from underrepresented and marginalised groups to write their proposals.

The result? Well it is rather remarkable. In just 3 years the number of applicants from diverse groups to ScotlandJS shot up to 35% and Global Diversity CFP Day has increased from 6 to over 80 workshops around the world.

“The key for me is that people are wanted, welcomed, and that their voice and perspectives are valued. If more people see people like themselves on stage, it will encourage them to apply also”

Conferences are places where people come to learn and have interesting conversations. If the same people present similar talks, there is a limit on how much we learn and discover. In addition to the above, if the experts as viewed as coming from one particular group of people, then the decisions may not take into consideration the “invisible” section of the user base.

Recently I learned a lot as I was trying to organised a note taker for the day to allow people who are hard of hearing to attend the workshop. I knew about barriers for people who were hard of hearing, or deaf but I have never considered how this impacts the day-to-day work environment. The same thing happened when my friend let me listen to her screen reader, and read code to me as she is visually impaired. Or I heard another speaker who talked about how the block chain model is a reflection of the old system for keeping records, in villages, before record keeping was centralized.

These stories are worth hearing, and I am hoping that by organizing initiatives such as the Global CFP Day, more and more people will have the opportunity to tell theirs.

The Glasgow workshop will include some of the community’s very best mentors especially organisers from communities such as Agile Scotland, Ladies of Code and CodeCraft

Find a workshop near you here. 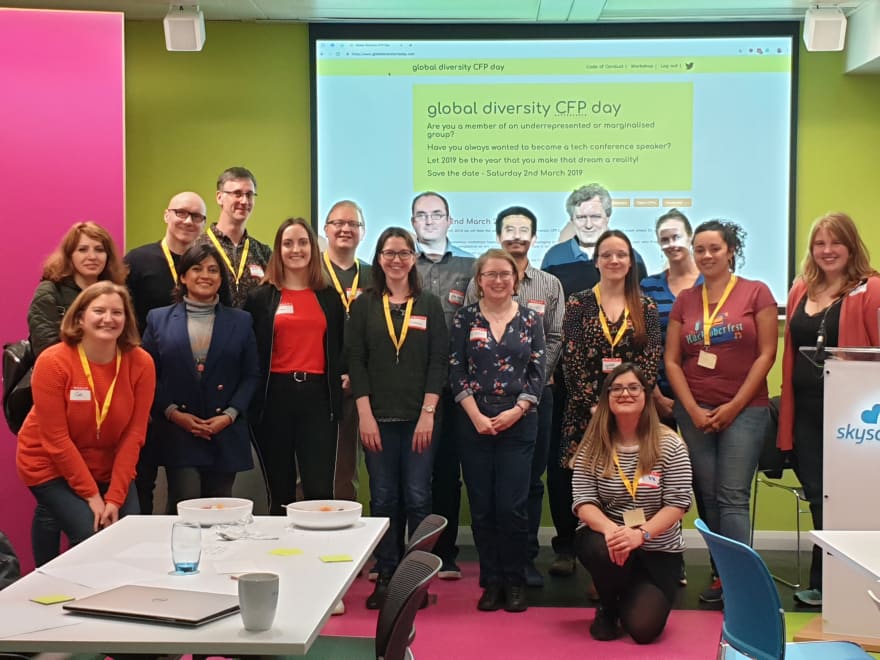 10 Reasons Why Your Years Of Experience Won't Matter Anymore.

Top 5 reasons to choose DevOps as a Career 💎

Lost Semicolon 💻🖱
Career changer from microbes and stats to software dev. Developer by day, community organiser by evening and developer by night.
The big secret to being consistent 🤫
#productivity #career #devjournal

Once suspended, lost_semicolon will not be able to comment or publish posts until their suspension is removed.

Once unsuspended, lost_semicolon will be able to comment and publish posts again.

Once unpublished, all posts by lost_semicolon will become hidden and only accessible to themselves.

If lost_semicolon is not suspended, they can still re-publish their posts from their dashboard.

Once unpublished, this post will become invisible to the public and only accessible to Lost Semicolon 💻🖱.

Thanks for keeping DEV Community 👩‍💻👨‍💻 safe. Here is what you can do to flag lost_semicolon:

Unflagging lost_semicolon will restore default visibility to their posts.