This month AWS announced a new feature called Lambda Extensions (Source). AWS release so many features it is hard to keep up. With each new feature we often need to ask ourselves, is this something we should pay attention to or not?

Why Are Lambda Extensions Useful?

In a server world, to extract custom telemetry, it was typical to use an agent, installed in the background of a server to periodically send data to monitoring platforms, hopefully avoiding impact to the application code in the process.

However, in the AWS Lambda world there were only two (not so great) options to achieve similar functionality to an agent:

What is Lambda Extensions? 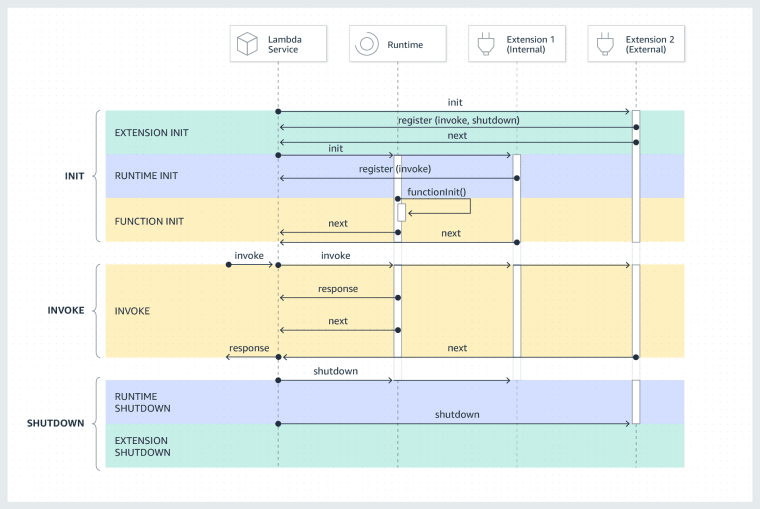 So by now you might be wondering: “what are some of the practical use cases for Lambda Extensions?”

Use Cases For Lambda Extensions

There are really three broad categories of use for Lambda Extensions: monitoring, configuration and security.

Now that we know more about what Lambda Extensions is and the main use cases, you may be thinking about the other details such as as the impact of Lambda Extensions on cost, performance, etc. Let’s cover that now.

Lambda Extensions can have an impact on performance and cost.

And that covers most of what Lambda Extensions are. If you’re interested to know more, I’ve got some links that might be useful for you to check out.

Should You Care About Lambda Extensions?

And that’s all we’re going to cover for today. I’m hoping you now have a better understanding of what Lambda Extensions are, and you can make a decision about whether they are or aren’t useful to you right now.

Lambda Extensions will be most interesting to you if you’re a third-party or vendor of monitoring, security or configuration. Or, if you work on an internal or a platform team in a company running lots of AWS Lambda functions who want greater control and standardisation of your Lamba functions.

The likelihood for most is that Lambda Extensions aren’t something worth paying too much attention to (just yet). You may find that you integrate them into your existing functions but you shouldn’t need to know all the fine details.

The post Lambda Extensions: What Are They, And Should You Care? appeared first on The Dev Coach.

If you’re interested in Cloud I write a monthly newsletter for Cloud Software Engineers. I spend the month digging around the internet for the best cloud engineering content and provide a monthly summary. I read every article I share, and I focus on fundamentals as much as possible.