Lately there has been some interesting discussion about Modern Web.

I personally think that

Related to the last point I feel that the Elm language come with a curse:

"Once you are in Elm, you want to stay in Elm"

This is not happening only with Elm, but with any compiled-strictyly-typed-inferred-immutable-purely-functional-with-nice-errors language.

So to alleviate some of these issues I made a small script to convert Elm SPAs into Statically Generated Progressive Web Applications (PWAs), called elm-starter.

The goal is to have a tool that

The resulting PWA should have these characteristics

The classic Lighthouse screenshot with confetti 🎉

What does this tool do?

This is all. Quite simple!

There are 3 demos made with elm-starter:

Note that the page transition is made with CSS transition applied to SVG. I realized too late that this is only supported in Chrome and I didn't have the time to change it, but you get the picture.

Here is the difference between having Javascript ON or OFF:

This is the classic Todo MVC, the one that I used extensively to compare different frameworks in a past article.

It was originally coded by Evan Czaplicki, I just adjusted it to fix some accessibility issues.

Compared to the previous demo, this one doesn't work without Javascript for its nature.

The preview card on Slack: 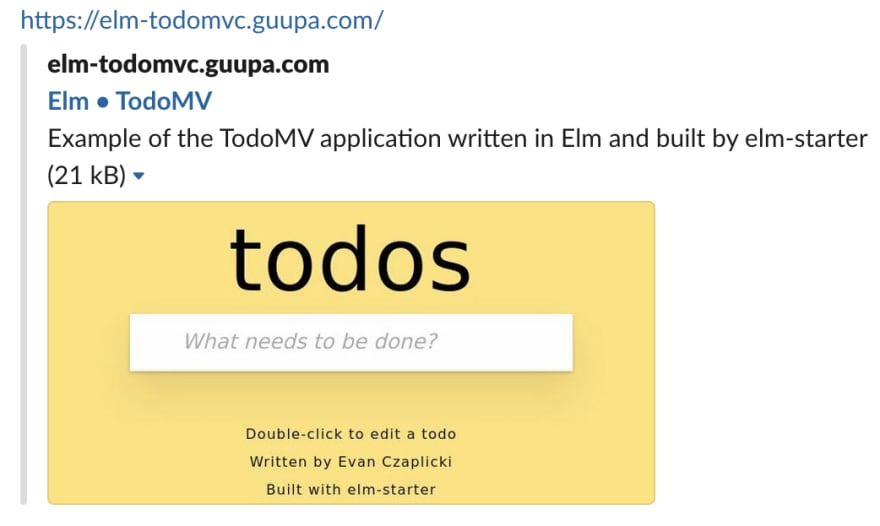 This example shows a possible synergy between elm-spa, a nice way to create complex SPAs that take care of several things for you through automatic Elm code generation. For example, to create new pages you simply run a command in the terminal and this creates the right files, routes and logic for you.

elm-starter can then take over and transform it in a PWA, statically generating all routes.

In this specific example all pages are accessible without Javascript, but the widget that requires Javascript (like the counters) will not be working.

The preview card on Slack: 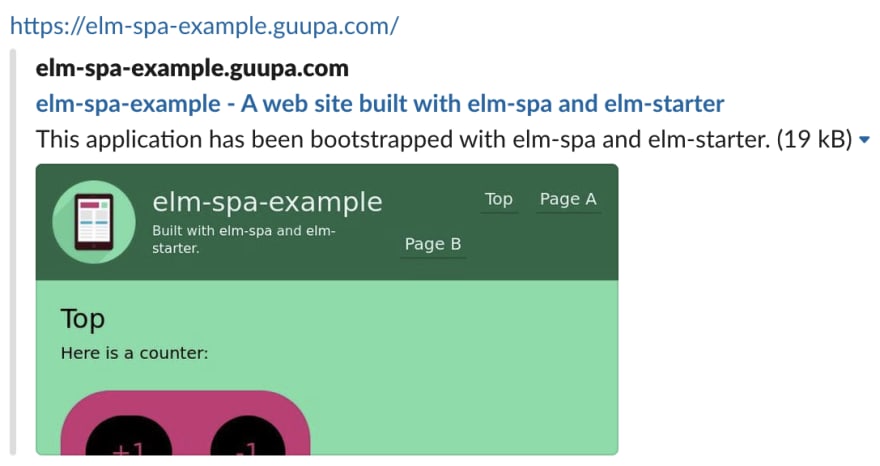 This is a snapshot of Index.elm that generates index.html:

Each page is statically generated with specific meta-tags so that search engine spiders can easily pick it up, also when they are not as sophisticated as Google, that is able to execute Javascript since a long time ago.

Someone says that even if Google can run Javascript, it still prefers static websites.

This is how Google indexed the elm-starter demo after few days from its launch:

These are other excellent projects that can be used to bootstrap an Elm application or to generate a static site:

About Modern Web vs. Traditional Web

To get more insights about the debate mentioned at the beginning of this post:

The fastest way to start using it is by clicking this button:

To modify the app simply clone the new repo on your computer and run:

Now you can edit src/Main.elm and, after confirming the result at http://localhost:8000, commit your modifications to Github.

The new app will be published live automatically by Netlify in seconds, including re-generating all static pages.

More information available in the README.

This is all, thank you for reading! ❤️