(In a hurry? Jump to the conclusion!)

This is an attempt to measure how good are front-end frameworks in dealing with simple errors.

I took the implementations of TodoMVC made in 5 different frameworks: VanillaJS, React, Vue, Svelte and Elm.

Then I injected 7 different errors and I analyzed the behavior.

After injecting error in the 5 implementations, I measured the outcome using this scale (ordered from best to worse):

They are ordered in a way that I find more desirable. For example, having the app not showing at all (rank C) is better than having it appear on the screen but with bugs (ranks D, E, F) because in the first case it's easier to note that there is something wrong.

The best case is when errors are not even possible to be added at all (rank A) or are intercepted by the compiler (rank B). The compiler-error case is only possible for Elm, Svelte and React JSX. Everything else is not compiled.

The worst case is when the app renders on the screen and there are no errors in the console whatsoever (case F). It means that if we don't test our application carefully we are likely to deploy a bug in production.

I also rated the accuracy of the errors:

I changed the opening of a <span> element to <spam>, leaving the closure intact, in the footer of the application: <spam>...</span>

The application renders but the footer is not there. There is an error in the console: Cannot set property 'className' of null.

This is a typical example of an unhelpful error, the text does not contain any hint on what could be the cause and the file where the error happens (view.js) is different from where the error is (index.html).

The application doesn't render and shows an error in the console at start:

This would be intercepted by the JSX precompiler.

The application renders, but the footer has a wrong layout.

There is a clear error in the console:

ParseError: </span> attempted to close an element that was not open

Changing only one element is not possible in Elm. A span element, for example, is created with span [] [ text "content" ].

This time we use spam both in the opening and in the closing element. This is a subtle mistake because we could have wanted to use a custom HTML type. But let's assume that is a mistake and see which framework detects it.

Elm in the only framework that has a compiler error: 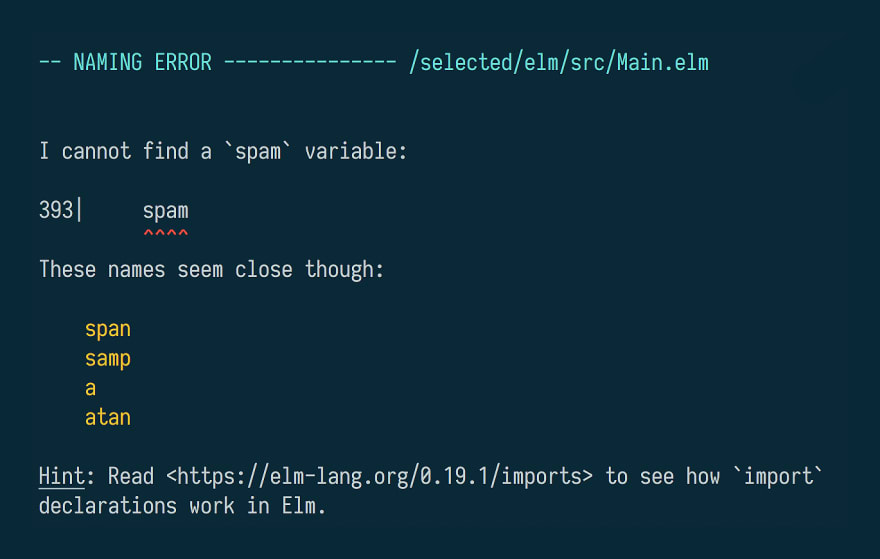 In Elm, to create a spam element you need to write

Other frameworks either just work or they have a warning:

This is the case of Vue that has this in the console:

vue.js:525 [Vue warn]: Unknown custom element: <spam> - did you register the component correctly? For recursive components, make sure to provide the "name" option.

3. Forgetting a space between a and href

No errors at all for VanillaJS, but the button "Active" doesn't work.

React return the error Unexpected token <ahref="#/" and it doesn't render the application. Another error that will be detected by the JSX compiler.

No errors at all, the same as VanillaJS, and the footer is also broken:

Is difficult to add this error as a and href are separated by a [ in Elm:

so I added the error this way

That generate this compiler error I cannot find a 'ahref' variable: These names seem close though: href

Changing the content of a string, as expected, goes undetected by all frameworks except VanillaJS and makes the link "Active" not working anymore.

VanillaJS give an error at runtime:

I investigated the reason and I found out that

As I consider this some kind of "cheating", I downgraded Elm to the same rank of all other applications.

This error is telling us that having strings in the code is usually a bad idea. This is why in Elm, and probably in other frameworks too, we usually write the routing differently.

So, using the function routeToString as href when we create links, assure that this type of errors cannot happen. It also has the nice side effect of making the code more maintainable if, in the future, we decide to change the url format or name.

Rank: VanillaJS get an E-, all other applications get an F.

We change the code where the state is initialized, changing the name of an object key or a variable.

There is an error in the console:

and the app is not working. The error happens only if the local storage is missing.

but the file with the error is todoModel.js:18

vue.js:525 [Vue warn]: Property or method "todos" is not defined on the instance but referenced during render. Make sure to declare reactive data properties in the data option.

The compiler gives a warning

Plugin svelte: 'items' is not defined

but not an error, so it is still building the application.

The application doesn't render and in the console there is the same error Plugin svelte: 'items' is not defined

Rank: Between B- and C-. I will go with B- as maybe is possible to configure the compiler so that it will stop the compilation, instead of just giving a warning.

In Elm we change a key of a record from entries to entriez. This is the compiler error: 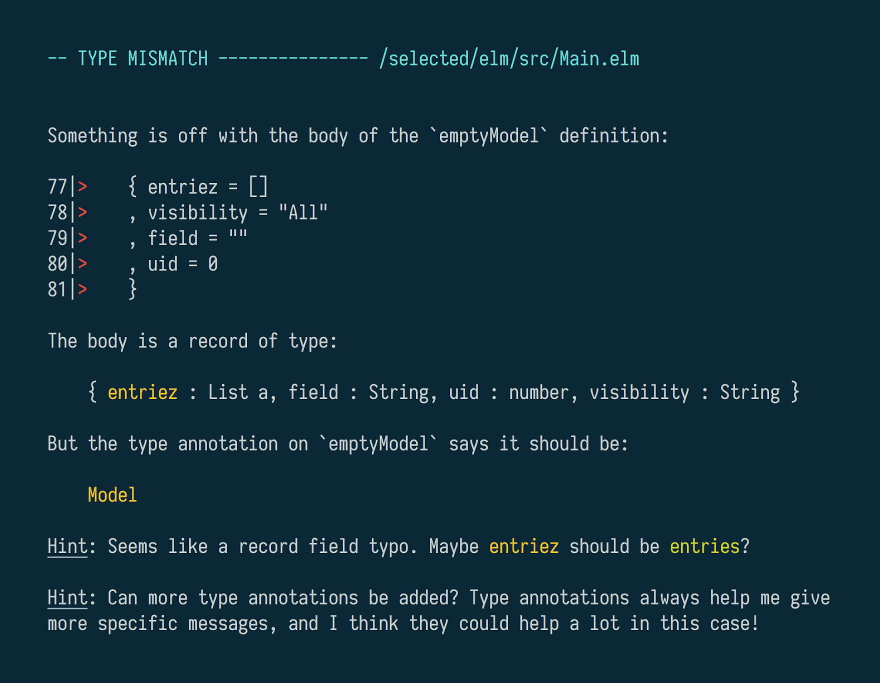 6. Corrupting the function that add a new todo item

Here I mostly change the variable name containing the title of the new todo.

The interesting part of this error is that it reveals itself only when users are adding a new item, so it is harder to detect compared to the others.

Changed "value" to "valua". Error when adding a new todo:

Changed "description" to "descriptiom". Error when adding a new todo:

I cannot find a 'descr' variable. These names seem close though: 'desc'

7. Forgetting to add the method .length to calculate the active todos

Usually the total quantity of active todo is calculated by filtering all todos and counting the remaining items with length.

I remove ,length where possible. If the implementation was using a different system for counting active todos, I refacto that a bit so that I could introduce the same mistake.

This is the summary

Let's try to quantify the result giving some number: 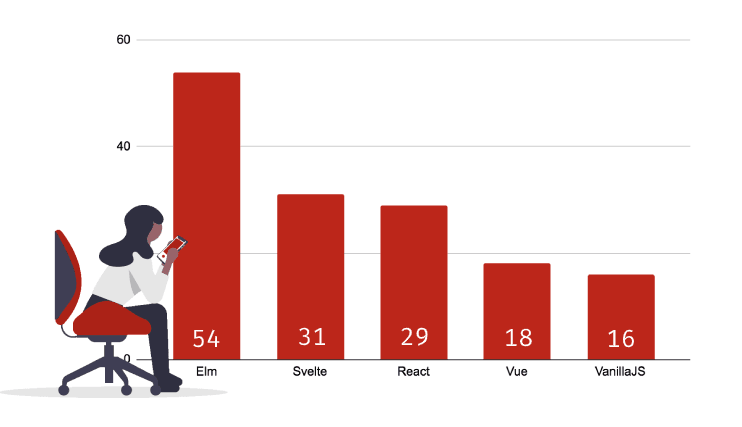 It seems evident from the result that a compiler helps to detect these type of errors (Elm, Svelte and React).

Elm leads the rank mostly because it is strictly typed and the fact that everything in Elm is code, including HTML.

And also thanks to the high quality of its error messages.

Thank you for reading and let me know what you think in the comments below.

Illustrations by Katerina Limpitsouni, from https://undraw.co/

Animating in React (The Many Ways!)