What is a program

A program is a set of instructions that the computer executes.

(To be more precise, a program is a set of instructions loaded in the CPU that the CPU executes to achieve an outcome). 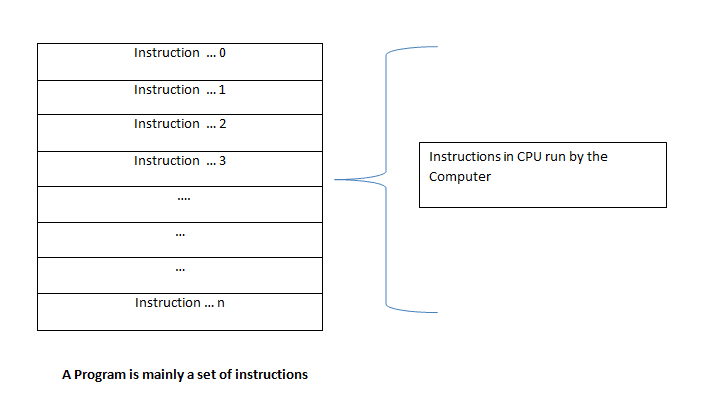 Now on to Programming, but First ..

a little bit of maths to begin with.

Now here comes the twist of the programming world which shatters down the known world of an aspiring beginner. What if we change the equation to:

Believe it or not, this is a valid expression in almost all programming languages.

A programming language is a language which the computer understands. It is just like any other language with its own syntax and constructs. The programmer uses it to make the computer follow his/her instructions.

Before moving further, let me clarify the difference between programming and computer science.

Programming is instructing the computer by means of a programming language to perform certain tasks for your desired output. You may have heard the language names already - C/C++, Java, Python, PHP, Javascript and many others. For many purposes - good grasp of certain programming languages are enough even without a Computer Science Degree. So, let not anybody tell you - you cannot become a programmer without a degree, but certainly the theories of computer science help if you know them.

Computer Science is the study of computers and computational systems. It is the scientific and practical approach to computation and its applications. The more you know the theories of this field, the better programmer you become. As a result, you write more efficient codes which helps to run a program faster using less computer resources. But to start off, absolute passion and absolute hard-work is enough to become a reasonably good programmer in the early stages.

Why we are discussing these boring hardware stuff before moving on to programming? To make you a better programmer by getting your fundamentals right.

Ok! Really on to Programming

Let me go back to the famous expression

Here is how we achieve it:

* I will use the syntax similar to Javascript but the language is not important, the concept is

Since we have three variables, we need to declare them in our program.
Most good programming languages requires that you declare the variables explicitly.

This is called variable declaration.

This is called variable assignment.

We could actually write
var X = 100 - in that case we would call it variable declaration with initiation.

In that case we would be reducing some lines like this:

Now it is very important to understand what goes on behind the scene, otherwise the mind blowing stuff we will be dealing with later (Y = X + Y) would be hard to make sense of.

The moment we write var X or var Y, a space is allocated in RAM because unlike mathematical variables which exist mainly in our brains, the variables of a program resides in an actual physical location.

Here is a conceptual diagram for better understanding: 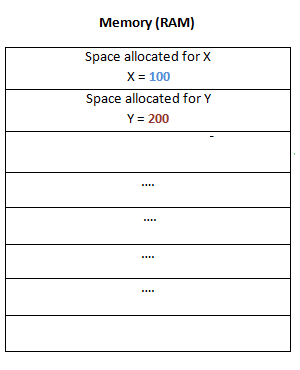 X and Y are like rooms in a building (which is our RAM) and they have the capabilities of holding values that we assign to them. We might say Room Number X holds value 100 and Room Number Y holds value 200 because we had assigned the values through the assignment operator '=' to them.

To calculate the value of X + Y, we could simply write
X + Y

we are telling the computer to fetch the value of X and Y from RAM, add them in the CPU and then store the result in another space called Z. 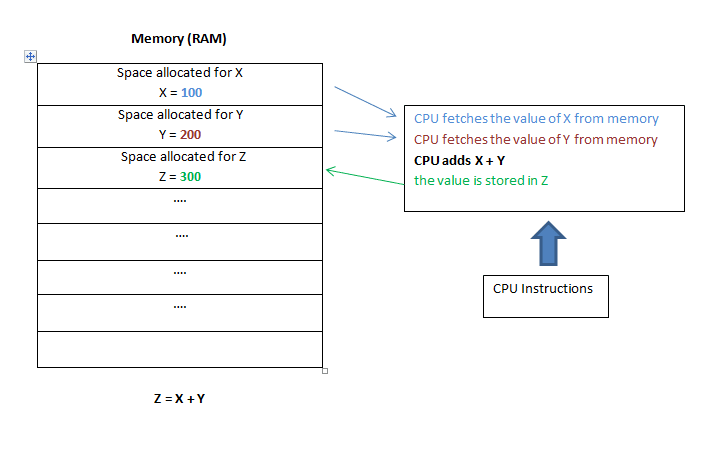 "CPU instructions" in the above image are nothing but the program we have written which goes like this:

Now on to the expression
Y = X + Y, which should make some sense now.

What we are doing here is, fetch values of X and Y from RAM, add them in CPU and put the value back into Y.

I hope by now you have understood computer programming languages are best read from right to left, almost a bit like Arabic isn't it :)? No, just scaring you a little! It is pretty intuitive. We just have to remember everything on the right side of an assignment operator ( '=' ) is processed first and then the assignment happens.

Again, an image for illustration purpose: 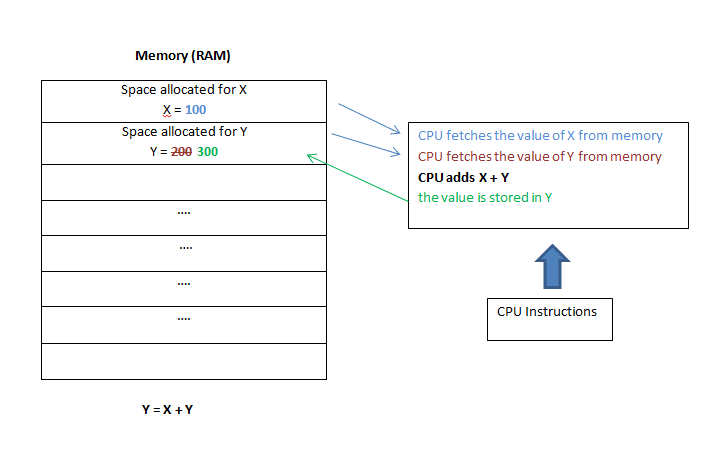 To round it off,

a) We declare variables - which allocates room for them in memory ( I hope after you read this, you would be a little careful about the memory from here on, after all everything has a price). ex. var X;

d) We store operation results by simply assigning to a room of our choice (either Z or Y);

If you are observant, you'd see that an expression such as Y = X + Y doesn't need Z, hence we don't need to declare Z. This saves a bit of space in the memory. For basic programming it of-course doesn't matter. However, to be mindful of space and other resources will help you to become a great programmer some day.
Yes, in modern day programming we have a lot of hardware resource, but sometimes we are abusing them by being careless with our approach to programming.

After all set and done, you might be wondering what should we do with Y or Z. How about showing the calculated result to the user of your program? In some languages we do that by invoking an instruction called print. If you write something like print(Z), it will show Z as the output to the end user in a DOS like black screen (console). In case of Javascript we can show the value in a message box with alert(Z). However, displaying an output to the computer/mobile screen is another discussion.

For now, do try to grasp the concepts mentioned here before jumping directly into programming.

I actually plan to keep writing a series of blogs for my niece Ahna (for whom I have prepared this basic tutorial). She has just finished her high school. She will be the judge along with those still in their late teens - whether this approach is easy or not to understand the basic programming concepts. However comments and constructive criticism are always welcome ..

Mukit, Ataul
I consider myself as an enthusiast in learning new things everyday, about our history and future as well as the present. My interests: Ancient History, Comparative Religion, Science and Tech, C++
What Exactly is a Programming Problem? My Perspective ..
#programming #problem
Programming Constructs for Beginners
#programming #constructs #beginners

Thanks for keeping DEV Community 👩‍💻👨‍💻 safe. Here is what you can do to flag lucpattyn: