This is a follow up to the introductory article of Quarks:
https://dev.to/lucpattyn/quarks-a-new-approach-with-a-new-mindset-to-programming-10lk

The introductory article discussed the philosophy behind Quarks but the scaling aspect of it wasn't covered fully because the idea behind it evolved. Hence the new article which sheds more light on the scaling side of things.

To understand scaling, a few terms must be understood first:

Now, on to the illustration before the explanation : 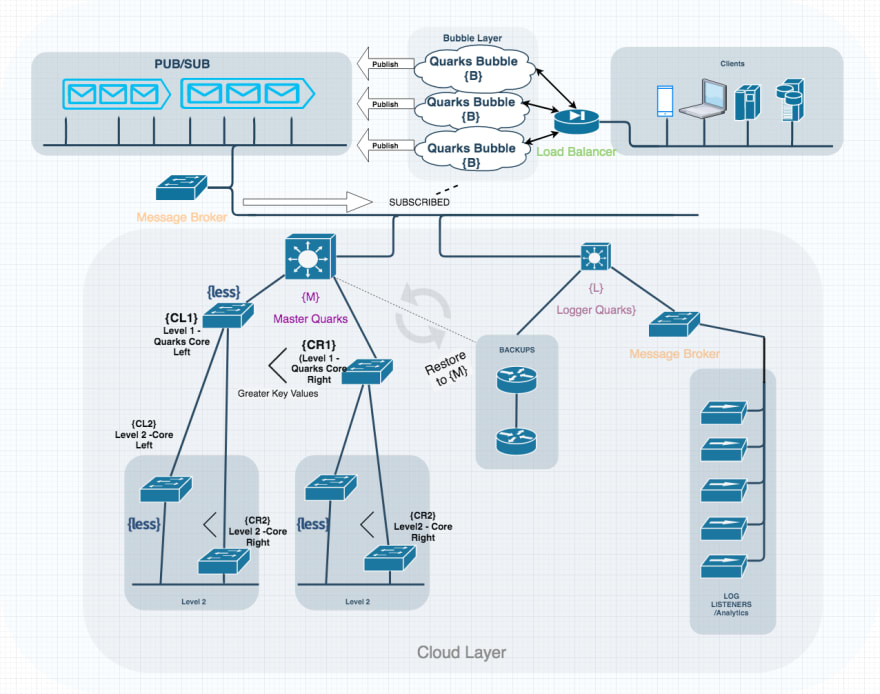 Let's approach this from top down:
The Quarks Bubble {B} can be thought of as part of the expandable layer (Bubble layer).
This layer take hits from clients, caches data and grow horizontally based on cpu and memory usage. So the bubbles are equivalent to Docker instances.

If a client (can be mobile app, laptop or an external server) invokes a write data operation, the command first go through a bubble that saves the data, send request respond to client and at the same time publish through a message broker to send it to the lower layer (Cloud layer).
{B} has a cache limit, so it can save limited number of data for quick retrieval.

At the lower layer, the Master Quarks {M} and the logger Quarks {L} both is listening for the data.

*Note a) The role of {M} is to decide where should this data be saved for later retrieval.

At this point the cores become important.

Quarks Core {C} is the basic level element that saves data and they are discussed in details in the introductory article.

{C} can be configured to have a data limit (for example 1 million elements).
The data is sharded/distributed based on Keys. The key comparison is nothing but basic string compare of the keys.

If {C} hits the limit, then new entries are sent to the lower level cores.
{C} has the maxKey attribute which denotes the highest key saved so far (based on it's string value).
If the new key is greater than maxKey it goes to next level {CR} otherwise next level {CL}.

{M} too works like {C} at level-0 and passes on data to next level when data limit is reached.

If a client (can be mobile app, laptop or an external server) invokes a read operation, the command first go through a bubble that checks whether that data is available. If available, then cached data is sent back to client.
Otherwise, the read request is published through the message broker and sent to the lower layer (Cloud layer).

At Cloud layer, {M} is listening for read requests.
When a request comes, {M} identifies which core or cores {CLx, CRx} has the data, communicates to the core through broker for the data, and once all data is gathered, send it to the Bubble layer (via message broker) which finally responds back to client with the requested data.

At Cloud layer, Logger Quarks {L} is listening for write requests.
(*There can be multiple loggers).

Whenever a new write operation comes it carries out two responsibilities:
1) Logs down the data in multiple storage
2) Publishes the write operation for other subscribers to save data in their own system and run analytics.

If {M} goes down it can be quickly restored by replicating a copy that is stored by {L}. A health checker with the aid of a script is able to do it.

If any of the other cores go down ,
the health checker notifies {M} to fetch data from {L} and restore it quickly.
{M} has the knowledge of saved data as already mentioned (refer to ^note a).

The beauty of the architecture is - it is easy to deploy, because {M}, {L}, {C}, {B} etc are nothing but instances of Quarks {Q} configured by a few parameters in config file or through command line parameters.
Getting {Q} and it's variants running is a breeze.

Till next time,
{Mukit}

How to Write a C++ Library

Mukit, Ataul
I consider myself as an enthusiast in learning new things everyday, about our history and future as well as the present. My interests: Ancient History, Comparative Religion, Science and Tech, C++
Quarks Replication for a scalable solution
#quarks #scaling #replication #webservice
Elegant way to reverse iterate a std::vector in modern C++
#cpp #vector #iterate
Quarks - A New Approach with a New Mindset to Modern Software Development
#cpp #caching #webservice #quarks