APIs are everywhere, and it's critical to have ways to efficiently test that they work correctly.
There are several tools out there that are used for API testing, and the vast majority will require you to write the tests from scratch, even though in essence you test similar scenarios and apply the same testing techniques as you did in other apps/contexts.
This article will show you a better way to tackle API testing that requires less effort on the "similar scenarios" part and allows you to focus on the more complex part of the activities.

When thinking about testing APIs, from a functional perspective, there are several dimensions which come to mind:

Ideally all the above scenarios must be automated. And it's achievable to do this for the last 2 categories, but when having complex APIs with lots and lots of fields within the request payload, it becomes very hard to make sure you create negative and boundary testing scenarios for all fields.

What are the options for API test automation

There are several frameworks and tools on the market which can help to automate all these. Just to name a few:

They are all great tools and frameworks. You start writing test cases for the above categories. The tools/frameworks will provide different sets of facilities which might reduce specific effort during implementation, but ultimately you end up writing the actual tests to be executed (i.e. code).
Even if you've done this before, and you know exactly what to test, even if you create a mini-framework that provides facilities for the common elements, you still need to write a considerable amount of code in order to automate all your testing scenarios.

And what happens when the API changes a bit? Some fields might be more restrictive in terms of validation, some might change the type, some might get renamed and so on. And then the API changes a bit more?
This is usually not very rewarding work. Software engineers are usually creative creatures, and they like challenges and solving problems, not doing boring stuff.
There are cases when one might choose to leave the API as is in order to prevent changing too many test cases.

Is there a better way?

But what if there is an alternative to this, and the first 3 categories above can be fully automated, including the actual writing of the test case.
And also make the next 2 categories extremely simple to write and maintain. This is the reason I wrote CATs.

CATs has 3 main goals in mind:

CATs has built-in Fuzzers which are actually pre-defined test cases with expected results that will validate if the API response as expected for a bunch of scenarios:

You can find a list of all the available Fuzzers here: https://github.com/Endava/cats#available-fuzzers.

There is one catch though. Your API must provide an OpenAPI contract/spec. But this shouldn't be an issue in my opinion. It's good practice having your API documented in a tools-friendly format.
Many companies are building OpenAPI specs for their API for easier tools integration.

Let's take an example to show exactly how CATs works. I've chosen the Pet-Store application from the OpenAPITools example section.
The OpenAPI spec is available in the same repo: https://github.com/OpenAPITools/openapi-petstore/blob/master/src/main/resources/openapi.yaml.

Looking at the contract, how much time would you estimate would take to create an automation suite to properly test this API? 1 Day? 2 Days? Several days?
Using CATs this will probably be a couple of hours.

Let's start the pet-store application on the local box first (you need to have Docker installed):

Before running CATs, please read how it works in order to better interpret the results.

Suppose both cats.jar and the openapi.yml are in the same folder, you can now run:

Not bad! We just generated 437 test cases, out of which 78 were already successful, and we've potentially found 181 bugs. To view the entire report, just open test-report/index.html. You will see something like this:

Now let's check if the reported errors are actually bugs or just configuration issues. We will deal with the warnings after.
Checking the first failing test (just click on the table row) we can see that the reason for failing is actually due to the fact that we didn't send any form of authentication along with the requests.
Looking in the openapi.yml we can see that some endpoints require authentication while some others require an api_key. 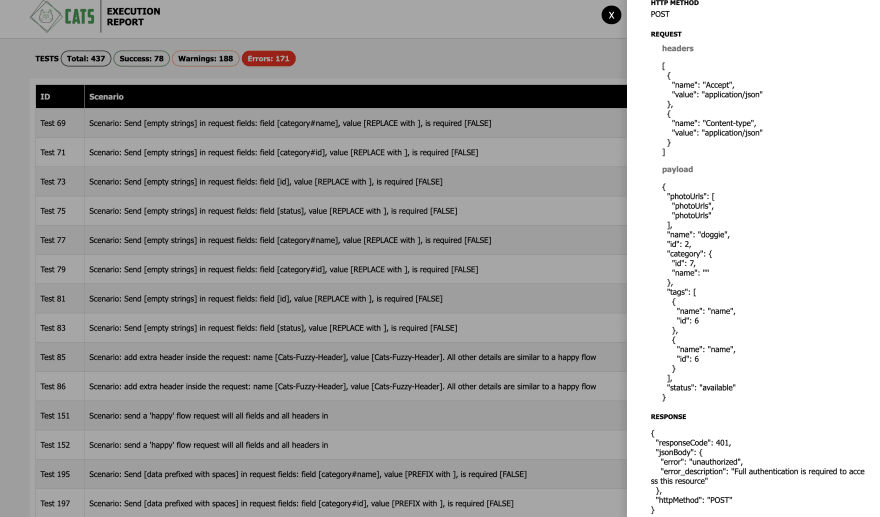 CATs supports passing any type of headers with the requests.
Let's create the following headers.yml file:

You can obtain the Bearer token by authenticating in the Swagger UI. The api_key has a fixed value as stated in the pet-store documentation.

Let's do another run, including now the headers.yml file:

Again, let's check if there are any configuration issues, or they are valid errors. Looking at test 1253 we can see that the target endpoint has a parameter inside the url. 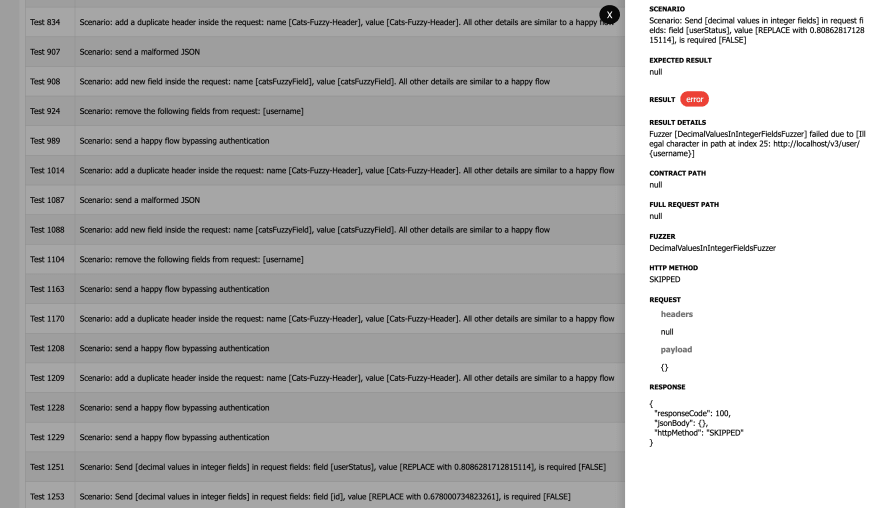 This is a limitation of CATs as it cannot both fuzz the URL and the payloads for POST, PUT and PATCH requests. And looking at the contract, indeed, there are several other endpoints that are in the same situation.
For this particular cases CATs uses the urlParams argument in order to pass some fixed values for these parameters. The provided values must result in existing HTTP resources so that the fuzzing works as expected.

Let's check again if these are actual errors. This time, they all seem to be valid bugs:

We now truely have 81 bugs which must be fixed in order to have a stable service.

Now, going into the warnings zone, these are usually tests which fail "just a bit". The server usually responds withing the expected HTTP response code family, but either the HTTP status code is not documented inside the contract, or the response body doesn't match the one documented in the contract.
Either way, these also must be fixed as it shows that the OpenAPI spec is incomplete or that the actual implementation deviated from it.

Looking at what we've got at the end, with a small effort investment we were able to "write", run and report 430 test cases which otherwise would have taken significant more effort to implement and run.
We have both validation that the service works well in certain areas, it must update the OpenAPI specs or tweak the service to response as expected and got a list of bugs for behaviour which is not working properly.

But we can do even more. As mentioned previously CATs also supports running custom tests with minimal effort. This is done using the CustomFuzzer.
The CustomFuzzer will run tests configured within a customFuzzer file that has a straightforward syntax.
The cool think about the custom tests is that you don't need to fill in all the details within the request, just the fields that you care about.
Below is an example of running 2 simple test cases that create a Pet and verify the details of a Pet. This is saved as customFuzzer-pet.yml. (Ideally we should correlate these 2, but it seems that the pet-store API is not returning an ID when you create a Pet).

And we get the following result:

The 2 warnings are also due to the fact that the response codes are not proeprly documented in the OpenApi contract.

And you get the same benefits as when writing the test cases using actual code:

As mentioned above, ideally, when getting the Pet details, you should pass an ID received when initially creating the Pet to make sure that is the same Pet. The customFuzzer-pet.yml will look like this:

CATs is not intended to replace your existing tooling (although it might do it to a considerable extent).
It's a simple way to remove some of the boring parts of API testing by proving built-in test cases which can be run out-of-the box.
It also makes sure it covers all fields from request bodies and has a good tolerance for API changes.

In the same time, it might be appealing for people that want to automate API test cases, but might not have the necessary skills to use tools required significant coding.

Why not give it a try?

Once suspended, ludovicianul will not be able to comment or publish posts until their suspension is removed.

Once unsuspended, ludovicianul will be able to comment and publish posts again.

Once unpublished, all posts by ludovicianul will become hidden and only accessible to themselves.

If ludovicianul is not suspended, they can still re-publish their posts from their dashboard.

Once unpublished, this post will become invisible to the public and only accessible to Madalin Ilie.

Thanks for keeping DEV Community 👩‍💻👨‍💻 safe. Here is what you can do to flag ludovicianul:

Unflagging ludovicianul will restore default visibility to their posts.