GitHub Actions are great for sharing & reusing logic across your CI/CD pipelines. However, sometimes sharing is not the highest priority. Sometimes you only want to hide the complexity by exctacting & encapsulating multiple build steps and replacing them with a single action.

Anyway, you have to create a GitHub action.

You could use actions stored in the same repository as the workflow. Such actions must be either written in JavaScript or be Docker actions, i.e. have a Dockerfile.

With JavaScript, at the time of the writing, actions must be written literally in JavaScript, no processing like compilation or transpilation allowed. In other words, it cannot be TypeScript: although you could use TypeScript to write an action, you’ll have to commit the dist then.

Docker actions are slow because the caching doesn’t work well at the time of the writing. Images are built from scratch every time you run a pipeline.

Finally, you may be against of polluting the main codebase with action’s code, and this is a valid argument too! 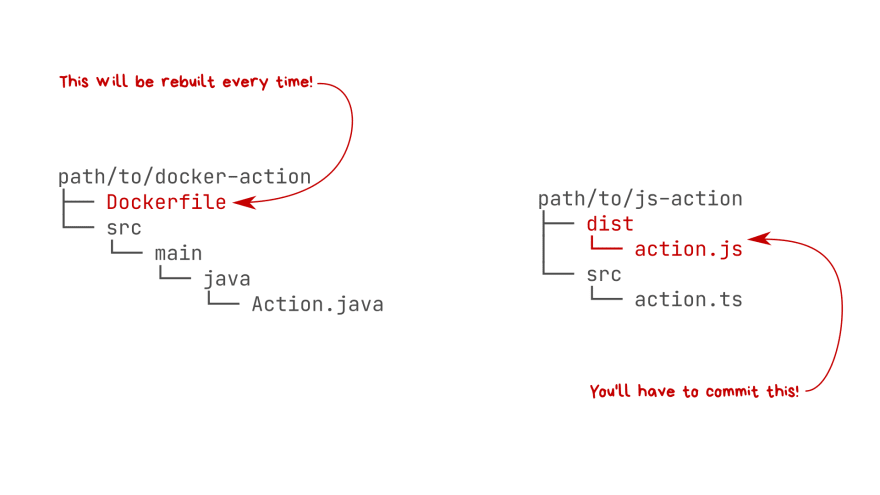 Because of this issues — polluting main codebase, forcing you to use vanilla JavaScript or being slow with other languages and runtimes — in-repository actions might not look appealing to you.

So you might want to take the hard way: to extract your action into a separate repository. But even then caching won’t work well with Docker actions and you’ll have to commit dist with JavaScript actions. However, in a separate repository you could at least have action’s own lifecycle and mitigate that with automation.

The idea is to create an orphan branch in your repository. Orphan means it wont have any intersections or common commits with the main branch, a completely separate one. GitHub won’t even allow you to make a PR to the main branch from the orphan one.

Thinking about Git as a tree was a mistake, it’s actually a forest!

Now you could store your whole action, written in any language, in this branch. It would have a completely different lifecycle by having completely different workflows in this branch’s .github/workflows directory. If it’s a Docker action, you could built and publish it to the GitHub packages of the same repository and use it the main branch’s workflows without rebuilding every time. 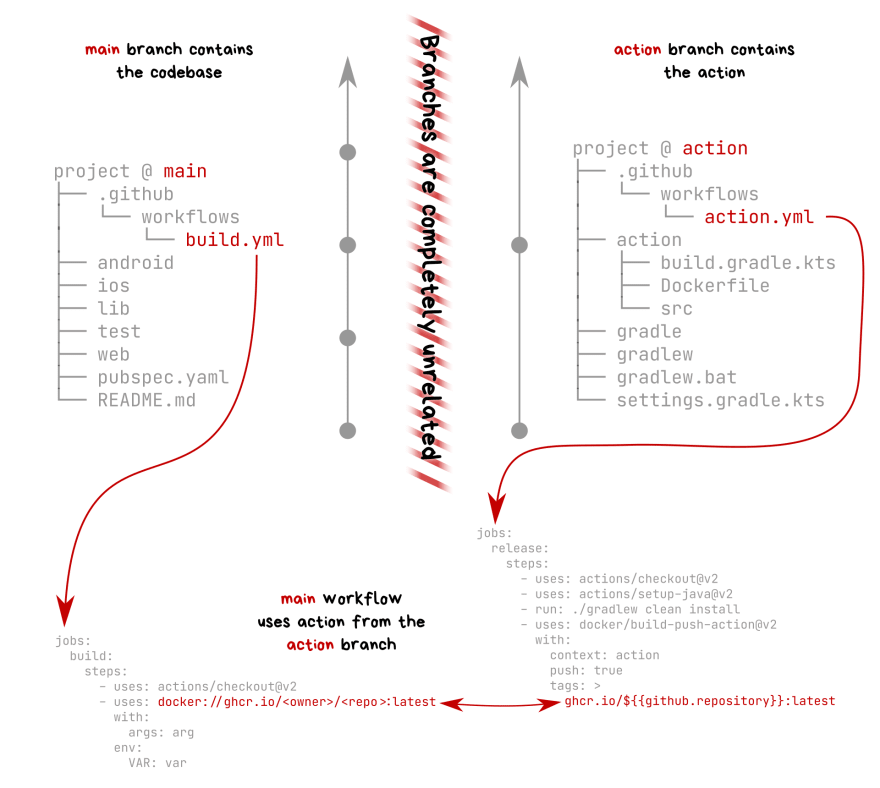 All the issues are solved!

✅ The codebase wouldn’t have any traces of the auxiliary actions code.

✅ Actions would have a completely independent lifecycle.

✅ Docker actions would be prebuilt.

OpenBB is pleased to announce the release of v1.3.0 which introduces new features and fixes! Available now to download!

How to Auto Update WordPress Custom Theme and Plugin from Github

Once unpublished, this post will become invisible to the public and only accessible to madhead.

Thanks for keeping DEV Community safe. Here is what you can do to flag madhead:

Unflagging madhead will restore default visibility to their posts.