A short story about wasting a day on a single newline at the end of a private key.

I was trying to set up a CI/CD pipeline with GitHub Actions, more specifically — configure a deployment via SSH. Generally, to connect to a server with SSH one needs a key pair: the public key goes to the server’s .ssh/authorized_keys and the private key is used to connect to the server.

I’ve added the public key to the target server and tried to connect with a new key — everything was working on my machine.

Then I had to put the private key somewhere on GitHub so I could use it in a workflow. GitHub doesn’t support files as secrets, only strings. So, I’ve copied my private key and pasted it as a secret. 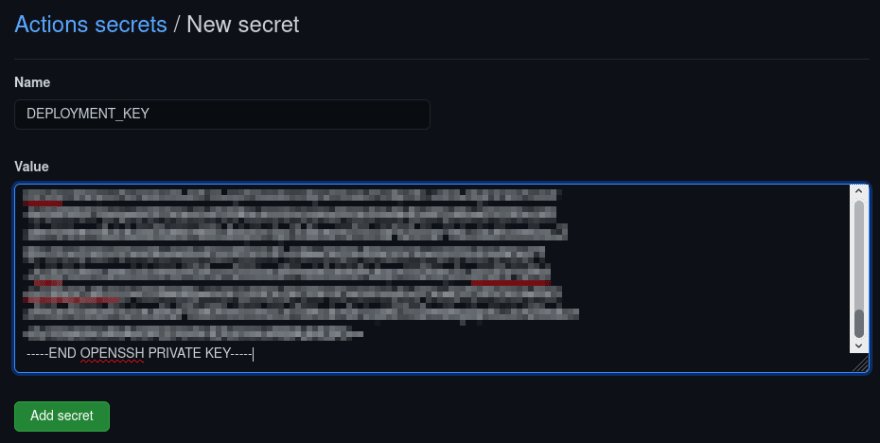 Note that cursor at the end of the last line of the secret.

Then I used some black magic to save this secret to a file:

…spending like an hour learning the importance of double quotes…

Finally, I got my key in ~/.ssh/deployment_key and it looked fine. To check that, I’ve stored it as an artifact, downloaded that artifact at the end of the workflow, and checked the key manually.

But when I tried to use that key with Ansible to connect to a server I got a really strange error message:

I was really surprised to see that "invalid format" and "permission denied". And the shit hit the fan.

I’ve increased Ansible’s logging to the most verbose level, but it wasn’t informative, just more text with the same message at the end.

I’ve googled those errors and double-checked the number of hyphens in "BEGIN OPENSSH PRIVATE KEY" line.

At the very bottom of my despair, I ended up reading an article about PEM file format on Wikipedia, trying to find the answer. From there I’ve jumped to the RFC 7468 and tried to understand its BNF description.

I’ve updated the secret on GitHub one last time, making sure that there is a newline and the end of it.

And it fixed the error, the deployment proceeded. 😌