⚠️ Update 25 April 2020: Akrobateo has been EOL in January 2020 due to the company going out of business. Their blog post regarding the EOL isn't available anymore and was probably shut down. Fortunately, the Wayback Machine has a snapshot of the post (7th January 2020). Here is an excerpt:

This is a sad day for team Kontena. We tried to build something amazing but our plans of creating business around open source software has failed. We couldn't build a sustainable business. Despite all the effort, highs and lows, as of today, Kontena has ceased operations. The team is no more and the official support for Kontena products is no more available.

This is so sad... 😢 Note that the Github repo kontena/akrobateo is still there (and has not been archived yet), but their Docker registry has been shut down which means most of this post is broken.

In my spare time, I maintain a tiny "playground" Kubernetes cluster on GKE (helm charts here). I quickly realized that realized using Service type=LoadBalancer in GKE was spawning a Network Load Balancer which costs approximately \$15 per month! In this post, I present a way of avoiding the expensive Google Network Load Balancer by load balancing in-cluster using akrobateo, which acts as a Service type=LoadBalancer controller.

✅ Since this method uses the worker node's external IPs, we can't really say it is a real "load balancing" mechanism (i.e., this method doesn't handle IP failover and doesn't even tolerate node failures). But in my tiny setup, it makes a lot of sense to use that.

What happens is that GKE has a LoadBalancer controller running (I can't see it) and whenever I have a service with type: LoadBalancer, it will create a L4 load balancer that balances 80 and 443 traffic across the nodes. Here is a diagram of my current setup: 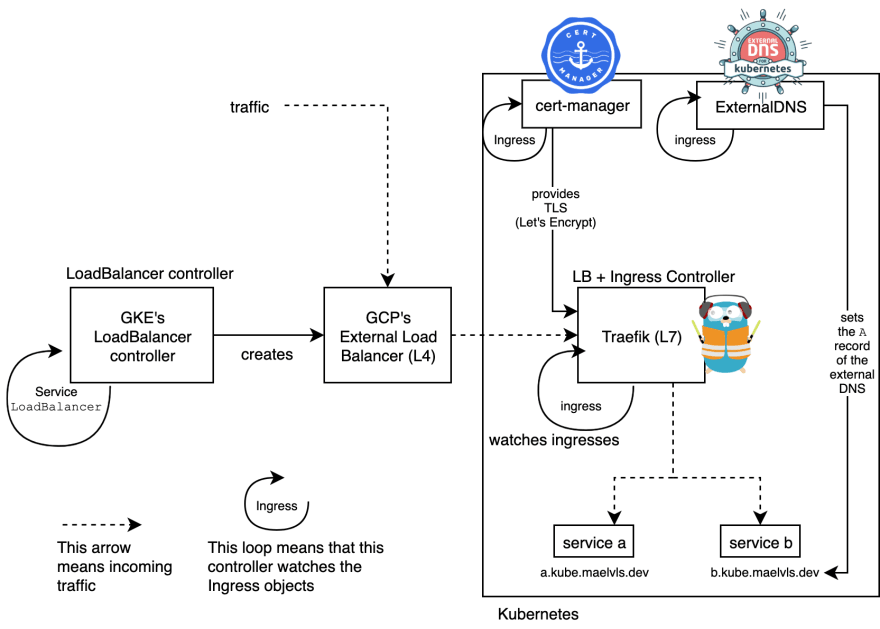 I use Traefik as a reverse-proxy and terminates the end-user TLS connection. And since Traefik sets the status.loadBalancer.ingress on the ingress objects, I can also use ExternalDNS for setting the A records automatically (I use Cloud DNS).

What if I stopped using the LoadBalancer service and use a NodePort instead? Two reasons against that:

Thus, my goal is expose Traefik on 80 and 443 and still use the type: LoadBalancer which, in turn, allows me to use ExternalDNS.

I could use the service's externalIPs but it isn't supported by Traefik and I would have to write some controller that would get the node internal IP and then set the externalIPs with these.

Instead, I opted for the hostPort solution. No restriction on 80 or 443. But I still have to automate a lot. Fortunately, akrobateo does exactly what I need.

hostPort is a field you can set in a Pod. The hostPort is used by kube-proxy to forward traffic coming to the node with the destination hostIP:hostPort to the pod itself.

Note that this pod was actually created using a DeamonSet.

Akrobateo acts as an internal LoadBalancer service controller and replaces the gce-ingress-controller that GKE applies to every GKE cluster. It is inspired by K3S' servicelb.

I might get some downtime with that, but for my use it's just fine.

That will install the akrobateo controller in the kube-system namespace:

Since we want TCP 80 and 443 traffic to be able to hit the nodes. Let's set a new firewall rule:

At this point, the LoadBalancer service should contain the IPs of the nodes:

When displayed with kubectl get, we can see the two IPs from the status.loadBalancer in the "EXTERNAL-IP" column:

Let's check that these are the external IPs of the cluster nodes:

The kube-system/akrobateo controller will create a DeamonSet for every LoadBalancer service it finds. The DeamonSet is created in the same namespace as where the Service is:

This DeamonSet runs one pod per node, each pod being responsible for proxying everything coming to the host's 80 and 443 ports to Traefik (see description of the network flow below).

There still is a slight issue here: we would expect ExternalDNS to set a A record with both IPs (35.211.248.124 and 35.231.10.40). But for some reason, it doesn't. As we have seen previously, the Akrobateo controller has successfully updated the traefik/traefik service (type LoadBalancer). And since Traefik is the ingress controller responsible for setting the status.loadBalancer.ingress on ingresses, Traefik is probably the culprit and might simply pick the first element.

Don't specify a hostPort for a Pod unless it is absolutely necessary. When you bind a Pod to a hostPort, it limits the number of places the Pod can be scheduled, because each <hostIP, hostPort, protocol> combination must be unique.

If you explicitly need to expose a Pod’s port on the node, consider using a NodePort Service before resorting to hostPort.

I do not fuly grasp what are the implications of using a hostPort. I guess it "litters" the iptables on the node? I'm not sure.

Then, when it is in the pod, the pod's iptables will kick in and redirect. Nothing is actually running in the pod, except for the namespaced network stack. These pods have:

Here is a diagram that shows the whole picture:

K3s has this same idea of "service type loadbalancer controller" embedded to K3s itself. The controller, called "servicelb" (servicelb/controller.go) runs as a Deployment and a DeamonSet running klipper-lb that uses pod's hostPort and the pod's iptables to forward traffic to the cluster-ip of the service. I don't know yet what are the differences between Akrobateo and K3s' servicelb. Note that Akrobateo itself is based on servicelb.