Recently, while running Android Studio I got next error from time to time which waste much time which can be increased based on project size (at least 1 minute, so this amount is multiplied with each build we do):

The process cannot access the file because it is being used by another process.

This can be caused when some plugins run another Java instance so they lock files from one to the other So solution is to kill java process by using:
TASKKILL /F /IM java.exe.

So I searched to make this automated somehow And found we can declare simple gradle task to do this job, it as next( write it at build.gradle)

Then to make it be done before each build go to build task at right side of gradle and choose to run before build as next: 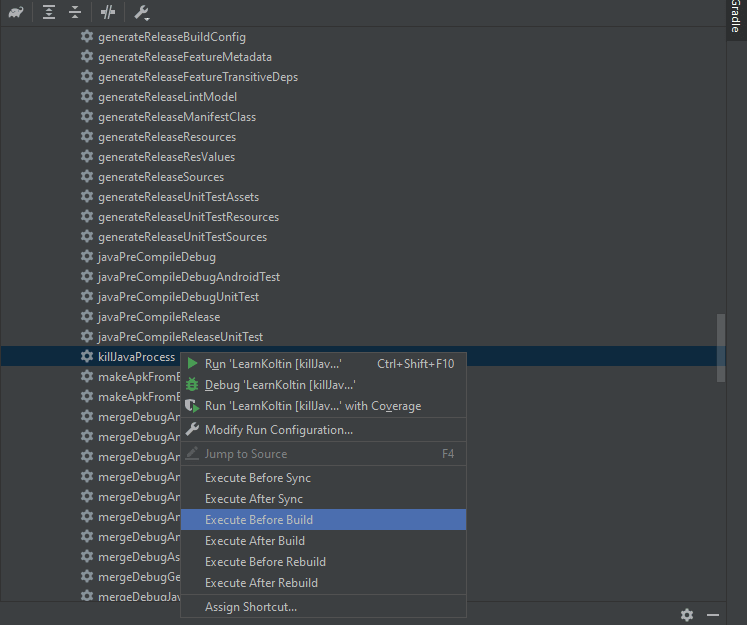 Kotlin quicky: Under the hood of collecting flows in Android with Kotlin

Introduction to Kotlin Flows and Channels

Once suspended, mahmoudmabrok will not be able to comment or publish posts until their suspension is removed.

Once unsuspended, mahmoudmabrok will be able to comment and publish posts again.

Once unpublished, all posts by mahmoudmabrok will become hidden and only accessible to themselves.

If mahmoudmabrok is not suspended, they can still re-publish their posts from their dashboard.

Once unpublished, this post will become invisible to the public and only accessible to Mahmoud Mabrok Fouad.

Thanks for keeping DEV Community 👩‍💻👨‍💻 safe. Here is what you can do to flag mahmoudmabrok:

Unflagging mahmoudmabrok will restore default visibility to their posts.