Hi there!
I'm writing this tutorial because I found the bitbucket documentation a little bit confusing explaining the configuration of ssh keys in pipelines. I hope you will find this tutorial useful.

N.B.: to follow this tutorial you must already have a bitbucket repository where pipeline exists (no needs to be a complex pipeline) or is at least enabled. I assume you have a basic knowledge of pipelines and git.

In some of my pipelines I needed to connect to my remote server and run commands/scripts. Bitbucket pipeline allows you to do that. You're on a docker container, based on the image indicated in the pipeline file (tipically ubuntu or another linux distro based) so you can install ssh package on the image, run ssh command to connect to the server and execute commands/scripts directly on the server.
I know you can automate the login passing your password to ssh command but I don't recommend it.
When the pipeline starts, you can't type password or run commands.
SSH Keys avoid you typing password each time you connect to the server and above all are more secure than passwords.

You can setup ssh keys in your pipeline in two ways:

The difference between choosing single key or multiple keys depends on how you're working.
Usually I associate each branch of the repository with a specific virtual host on my server and I prefer to have multiple keys due to security reasons.
Single key is automatically injected into the docker container when the pipeline starts.
For multiple keys instead, you need to configure the keys manually through little differents steps.
But don't worry and let's start with the single key. 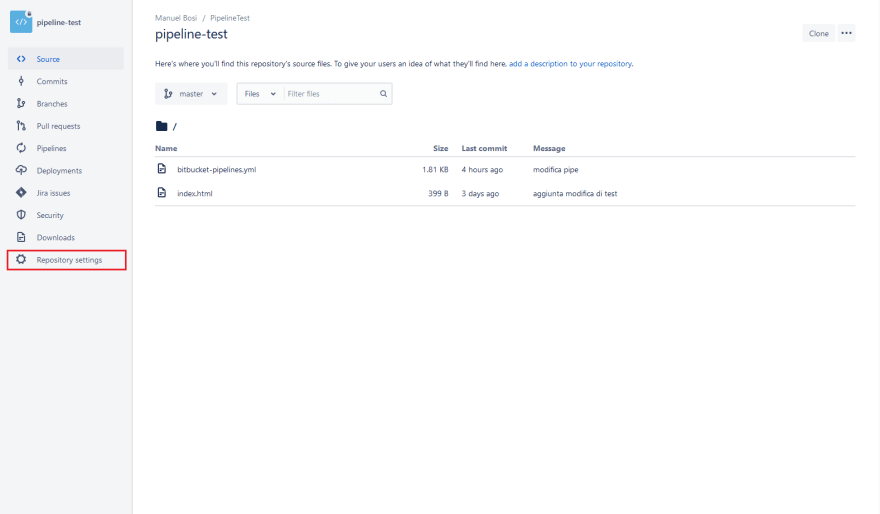 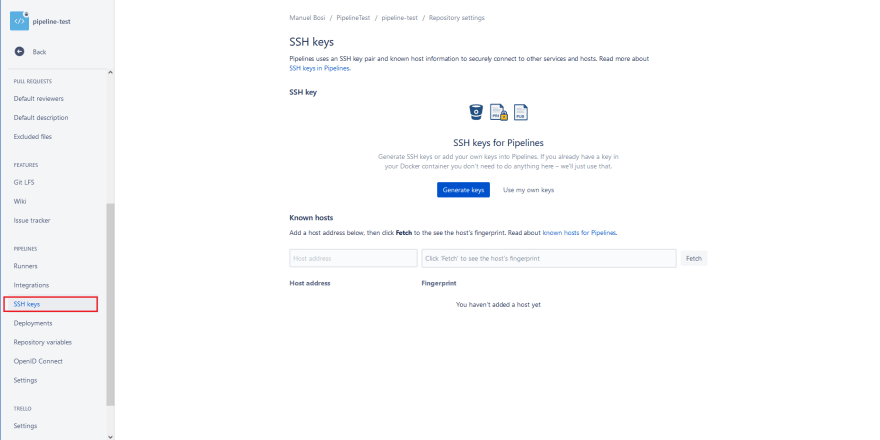 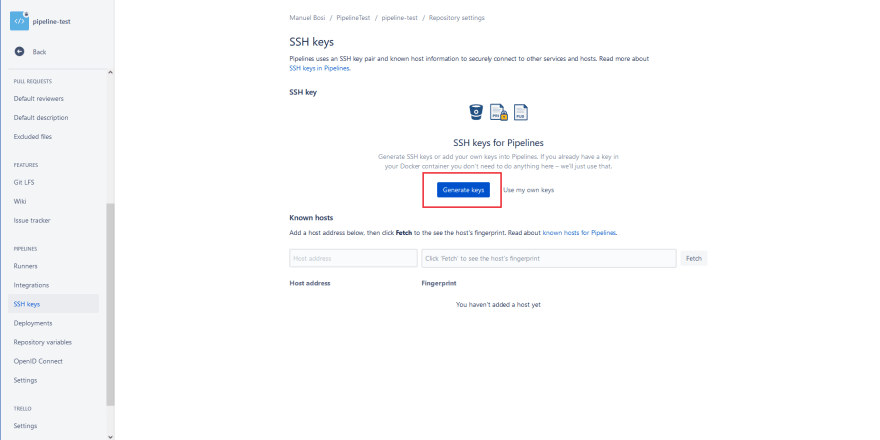 Now you should have an ssh keys pair (private and public). 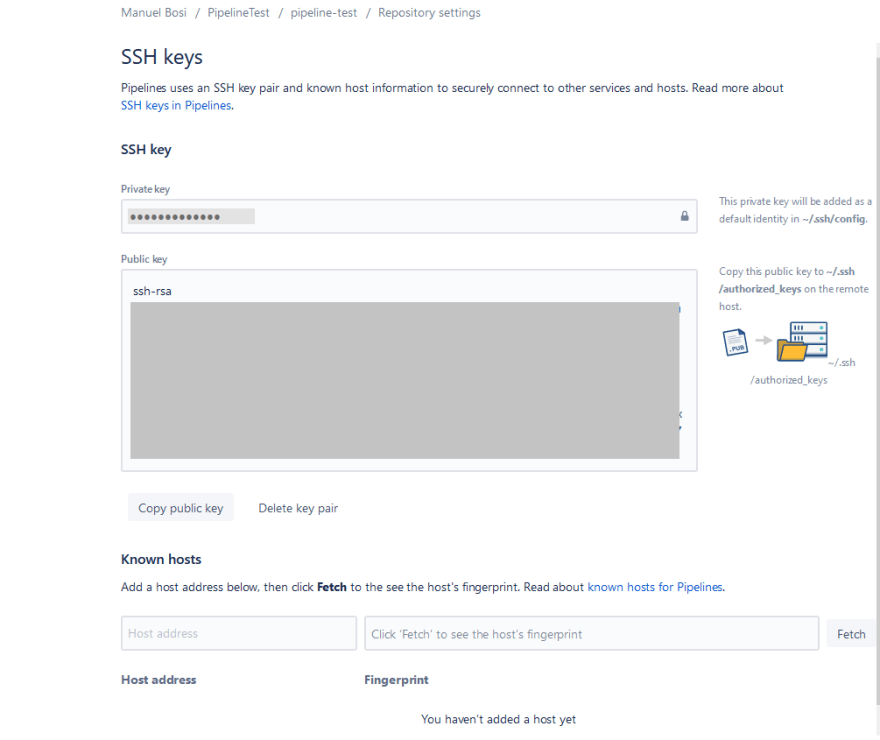 Take the public key generated previously and copy it into a file called authorized_keys on the server in the .ssh folder

When you got response (the fingerprint of server) click the blue button ADD HOST.

IMPORTANT: if your server uses a different port than default (22) to connect via ssh you can type SERVERIP:PORT in the Host address field

Bitbucket automatically injects in the known_host file of docker container the fingerprint of the server and bypass the message below while connecting via ssh for the first time (remember: when pipeline has already started you cannot type or accept anything).

Now in your pipeline file you can use ssh to connect to your server.
Between quotes you can add one or more commands you want to run on your server.

Pulling changes
Sometimes you may need to pull changes from the repository using git pull. In order to do this, login into your server through the terminal and run the command below to generate private and public keys for your server.
Press enter for all questions (filename, passphrase)

Copy all the content of id_rsa.pub file (public key) and paste it into the key field in Repository Settings -> Access Keys -> Add Key
Finally test the connection running this command on your server.

You should see an output says:

authenticated via a deploy key.
You can use git to connect to Bitbucket. Shell access is disabled.
This deploy key has read access to the following repositories:
accountName/repositoryName

Login in your server through terminal and generate ssh keys pair by running this command. 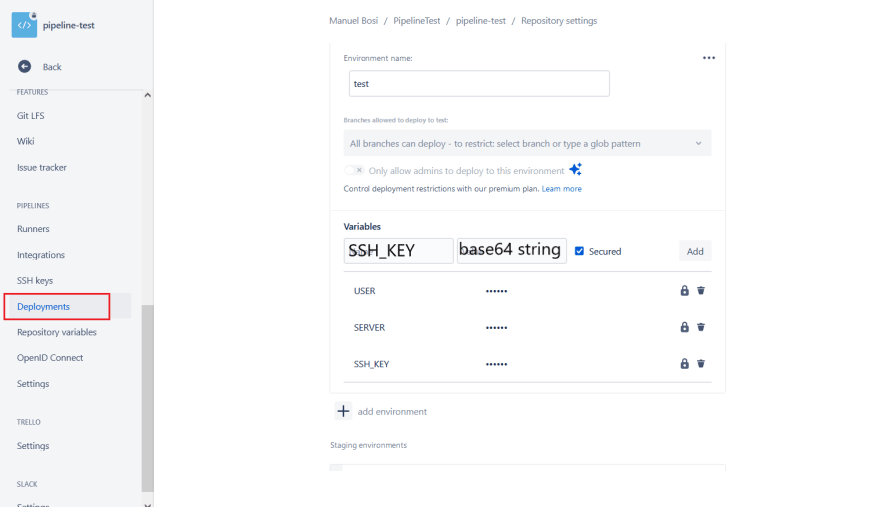 Repository variables are useful, because in your pipeline file you don't need to write sensitive data like server ip, username, port etc...

Follow the single key procedure about Pulling changes if you need to pull changes from repository using git pull.

I'll be happy to help you out if something went wrong 😄

Manuel Bosi
What was your win this week?
#discuss #weeklyretro
Meme Monday 😬
#jokes #discuss #watercooler
How to publish your project to npm?
#javascript #node #tutorial #opensource

Once suspended, manuelbosi will not be able to comment or publish posts until their suspension is removed.

Once unsuspended, manuelbosi will be able to comment and publish posts again.

Once unpublished, all posts by manuelbosi will become hidden and only accessible to themselves.

If manuelbosi is not suspended, they can still re-publish their posts from their dashboard.

Once unpublished, this post will become invisible to the public and only accessible to Manuel Bosi.

Thanks for keeping DEV Community 👩‍💻👨‍💻 safe. Here is what you can do to flag manuelbosi:

Unflagging manuelbosi will restore default visibility to their posts.