Last year I wrote a blog post, "I created the same application with Rails and Javascript", following a trend of posts where the author Sunil Sandhu did the same comparing a few frontend Javascript libraries.

My approach in that blog post was using Rails to render all HTML and then using a bit of Javascript with Stimulus{:target="_blank"} to recreate the same application behavior.

A few weeks ago, I found a tweet from Chris McCord, the creator of Phoenix Framework for Elixir, where he was showcasing a new functionality coming with Phoenix 1.5, he wrote a small Twitter clone without Javascript, it was beautiful. 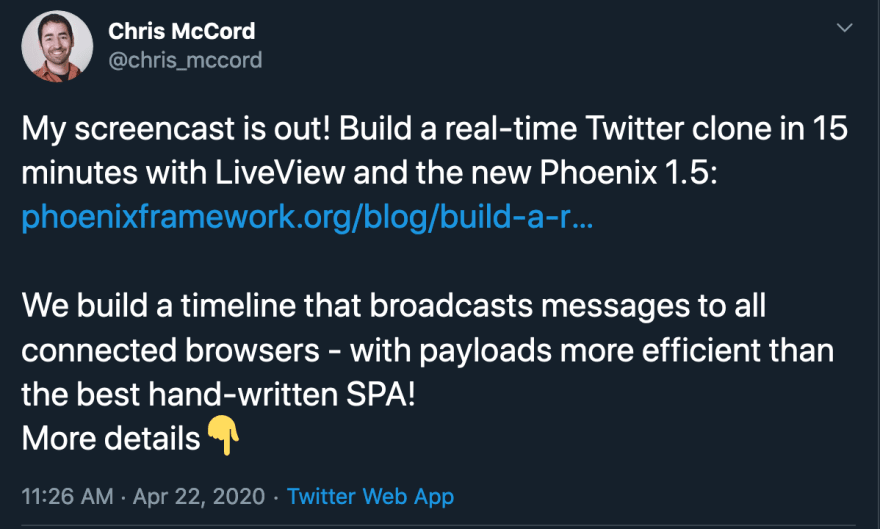 Later, I found a video from Hopsoft where he did the same with Ruby on Rails using his libraries CableReady and StimulusReflex, no Javascript, just Ruby using Rails' ActionCable to broadcast DOM changes, it was fantastic. 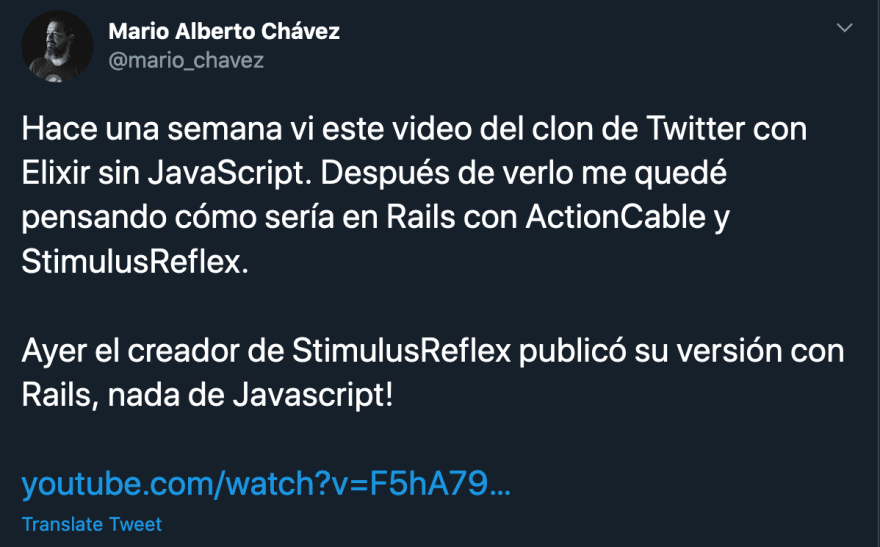 So I decided to give another try to the same application by removing the Javascript that I wrote for it. The starting code for this post is at https://github.com/mariochavez/rails-todo-2019.

In the original application the Rails application was created without ActionCable{:target="_blank"} support; it is needed for CableReady to work.

First, make sure that config/application.rb has the following line uncommented.

Create the file config/cable.yml and add the following content.

Using async in this case, save us from the need to have a Redis instance running on Development and Test. Still, add the Redis library to your Gemfile.

ActionCable works with a Javascript side, so we need to install the libraries with Yarn.

Finally, generate an ActionCable channel with the following command and require the channels in your app/javascript/pack/application.js

At this point, ActionCable is ready for us to use.

This step is quite simple, remove the two Stimulus controllers from the previous version of this application.

The application does not work anymore after removing these files — Cleanup the Rails templates from all the data attributes required by the deleted Stimulus controllers.

In this template, you need the Todo#id attribute; the dom_id method creates an id like todo_1 for you.

This template needs the id for the Todos list container. Here how it looks after removing all data attributes.

It is the time to install CableReady in your application.

With CableReady installed, we need to setup ActionCable's channel for it. First, setup the Javascript channel to require the CableReady library and update the received method to call CableReady if data transmitted via ActionCable is CableReady data.

Next, open the TodoChannel class and set the stream name to "todos".

First, reimplement the delete functionality for Todos. This one is quite simple; when the user clicks on the delete button, an ajax call is made via Rails UJS and received by TodosController#destroy action. Here you tell CableReady what operations to perform back to the DOM and broadcast them via ActionCable.

The remove operation needs the id of the Todoto remove, and then the operation is broadcast to the browser. The Todo is removed not only in your browser but if we have other browsers or tabs open with the application, the Todo is removed across all of them. Here is what CableReady send via ActionCable.

To create a new Todo, you need more than one operation to be broadcasted, CableReady allows you to batch operations very easy.

The form to create a new Todo in our UI sends a remote form call via Rails UJS; this call is dispatched to TodosController#create action, which validates and saves the received Todo. If the Todo is saved, then it performs 3 CableReady operations.

If validation fails and the Todo is not saved, an error is added via the insert_adjacent_html method.

You are done; after these changes, the application should behave as before. You manage to remove all written Javascript for this application while keeping the same functionality.

First of all, it is clear that you are using Javascript but not Javascript code that you need to maintain. Under the hood, ActionCable and CableReady provide Javascript functionality to interact with the Browser.

Once suspended, mario_chavez will not be able to comment or publish posts until their suspension is removed.

Once unsuspended, mario_chavez will be able to comment and publish posts again.

Once unpublished, all posts by mario_chavez will become hidden and only accessible to themselves.

If mario_chavez is not suspended, they can still re-publish their posts from their dashboard.