This was originally posted on my site at https://martyhimmel.me on January 10, 2017. Like a number of others on dev.to, I've decided to move my technical blog posts to this site.

Last time, we looked at the basics of functions and how to create them. In this tutorial, we'll focus more on using functions and look at recursion, closures, and functions as "first-class citizens" or "higher order functions" (both terms reference the same idea).

A recursive function is a function that calls itself repeatedly until some condition is met. You can think of it like a self-looping function.

For the first example, we're going to use a factorial. If you're not familiar with factorials, it's a mathematical term that takes a number and muliplies every number (starting with 1) up to the given number. For example, factorial 5 (written as 5!) is the result of 1 * 2 * 3 * 4 * 5, so 5! = 120. Using that as our base, here's a function that handles it with a standard for loop.

Now let's convert this to a recursive function.

As you can see, this simplifies the code. Recursive functions have their limits in JavaScript though. Every time you call a function, it gets added to the stack, which takes up memory. The bigger the stack, the more memory being used. If the stack gets too big, the app (or the browser) can hang and/or crash.

Here's the tricky part - depending on your system, this can hang the browser at a relatively low number. On my laptop, there's a momentary pause at fibonacci(30) while it calculates, about a 2 second wait at fibonacci(40), and it hangs at around fibonacci(55). The reason is the way this recursive function is set up, it makes 2 more function calls for every one value, which calls the function two more times to calculate those values, and so on. Here's a graphical representation of that.

The way to get around that is through memoization - a process of storing known or previously calculated values and passing that information. This results in far fewer function calls, which means the stack isn't anywhere near as large, and the performance is greatly improved. Here's a memoized version of the fibonacci function.

In this case, any time a value is calculated, it gets stored in the values object, which is passed with each call. In the non-memoized version, the function calls are being made even if the same value was calculated in another branch. In the memoized version, once a value is calculated, it never has to be calculated again. The values object is checked for the number's value and, if it exists, it uses it instead of calling the function again. The branching looks more like this now: 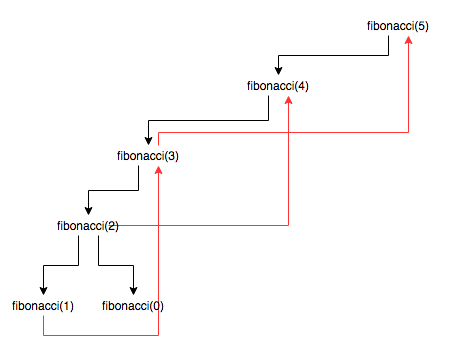 The simplest definition of a closure is a function within a function, but that definition doesn't capture the power of closures. In a closure, the inner function has access to the outer function's variables and parameters. Here's an example.

One of the common ways of using closures is with an Immediately-Invoked Function Expression (IIFE). An IIFE is a function that runs as soon as it's created. Here's a comparison of a standard function and an IIFE.

Often times, you will find entire scripts wrapped in an IIFE. Doing so prevents the global scope from being polluted with variables and functions. It essentially creates a privately scoped module. This is actually the basis for several design patterns in JavaScript as well, such as the module and revealing module patterns.

JavaScript functions are referred to as "higher order" or "first class" functions (they're the same thing). What this means is that functions can be used in a similar way as objects - you can pass a function as an argument, return a function from another function, etc. Event listeners are dependent on accepting functions as arguments.