This blog post is intended to help people willing to understand better the process to contribute to a github opensource project for the 1st time. It does not explain "how" (this part has been addressed already by multiple posts, you'll find links about this at the end) to use the github fork workflow but rather "why" it is used and why it seems so complex the 1st time you look at it.

Please let that sink in. Have you ever considered how complex it would be to write a book together with multiple people ?

Well, if you let everybody free of modifying any part of the book, this is going to be messy ! People erasing other people's parts (to replace it with their own), people disagreeing on sentences, or people who write duplicate sentences because they did not agree beforehand on who would write which part ...

In order to avoid a mess, you need to manage how people work together. You need to provide people a process, a workflow that allows them to focus on the business value of the book (writing it !) rather than wasting time synchronizing with everybody's agenda.

Obviously someone will need to be in charge of this workflow, carefully checking each person whereabouts, and your workflow needs to allow this person to handle the contribution of each member of the group in a manner that provides him

Now that we know what problem the github fork workflow aims to solve, let's see how it unfolds.

Let's consider the following scenario : a contributor considers the OSS project PrestaShop but thinks the logo is actually quite bad and would look better in black&white. He wants then to suggest a better version of this logo. 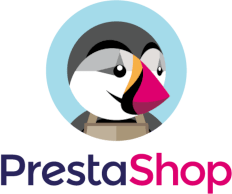 In the beginning of this story, you have the official repository alone, the authority where the official source code belongs to. It is a git repository, hosted on github.com . 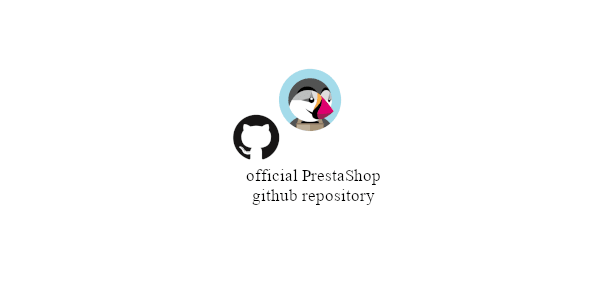 Now comes the contributor who wishes to suggest a better version of the logo. He is forbidden to do this on the official repository (else it would mean anybody can modify anything in the project and this would lead to chaos).

So github requires him to create a copy of the official repository, which is called a fork. 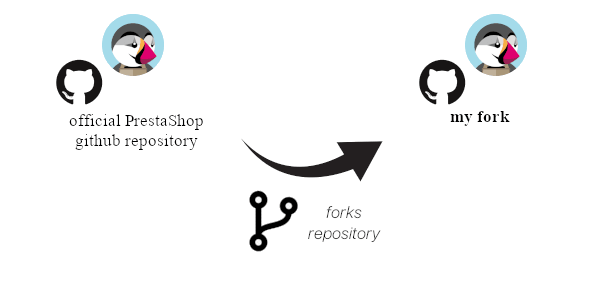 Back to our usecase. The contributor now wants to modify the logo on his fork rather than the official repository. Since his fork is "his property" he can do whatever he wants on it, including altering the logo to make it black&white.

But his fork is a repository on github. This is not a convenient environment to do some modifications (although github provides quite a nice online editor), especially for images. The contributor will consequently create a git copy, a clone, of his github repository on his own computer. 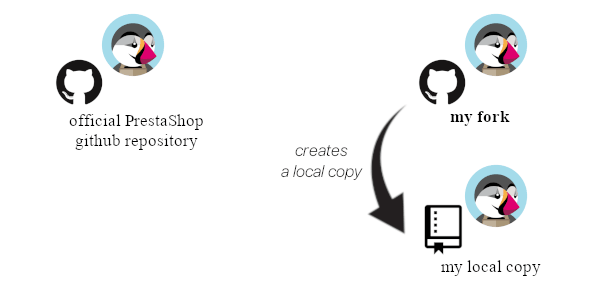 At this point there are 3 versions of the PrestaShop OSS project: 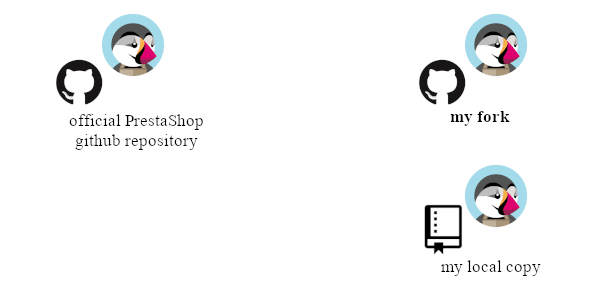 Since the local copy is on the contributor's computer, he can edit it using his favorite image editor (someone said GIMP ?) and improve the logo. He does so by altering the logo to make it more "classy" ... meaning black&white. 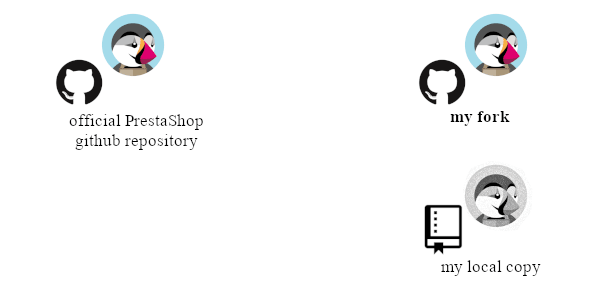 The contributor then updates his fork by pushing his changes from his computer copy into github. This is a standard git process where you host the code online and edit it on your computer. Usually you mirror the branches of the github repository and your local copy. 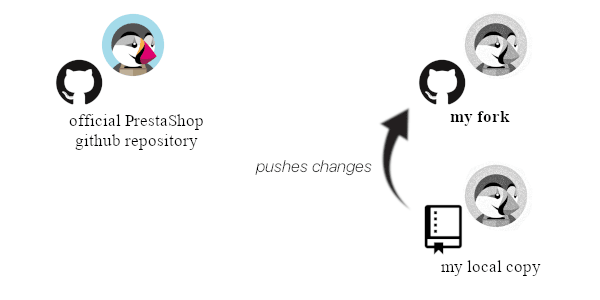 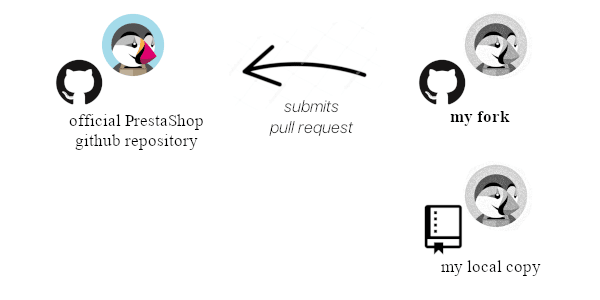 The official repository maintainers will be able to look at his Pull Request, review it, suggest modifications and either accept or refuse it.

When you are being told for the 1st time about github fork workflow, you might think "why ? why does this contribution process involves 3 git repositories, me pushing my work from my computer to a fork then the fork requesting a merge into the official repository, this is such a waste of time ..." . If the contribution was a quick fix (like a missing comma), you might spend more time applying the workflow* than making the necessary code changes !

*For these kind of usecases, github online editor is quite nice as it allows you

But when you consider the big picture, it actually makes sense. Each of these 3 repositories serve a purpose.

The official repository is the "location" of the official source code and must be modified only by approved contributions.

Forks allow developers to do whatever they want and allow specific code changes to be submitted for merge into the official repository.

Since forks are hosted on github, they are not easy to use, which is why it is better to make a local git clone of your fork on your computer and work on this copy. On your computer you have access to all your developer tools and environment.

The "hard work" of doing an opensource Pull Request actually comes from passing and pushing changes between these three.

Also, keep in mind that in our scenario we focused on the contributor point of view:

But for the project maintainers, the situation rather looks like this ! 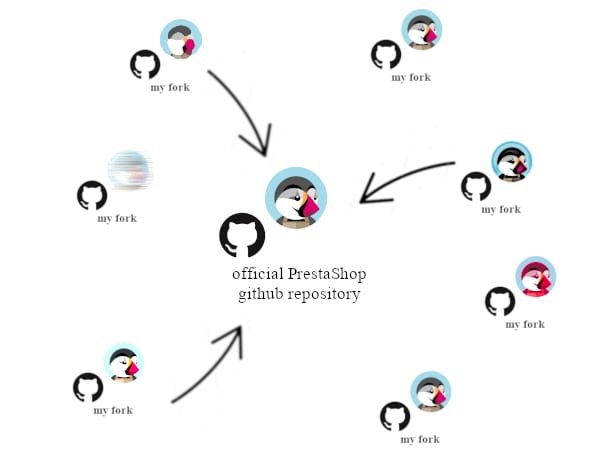 Github fork workflow also allows opensource maintainers to keep track of all incoming contributions and efficiently manage them. An efficient tool is necessary for a quality project, which is why so many projects use github fork workflow.

Some parts that I have not covered

In this blog post, I did not talk about

I might cover them in another blog post, as this one is already quite long to read for an "introduction".

Here are some great tutorials explaining the "how" to contribute to a github opensource project.

Tips on applying to the MLH Fellowship in 2023 🎊

Once unpublished, this post will become invisible to the public and only accessible to Mathieu Ferment.

Thanks for keeping DEV Community 👩‍💻👨‍💻 safe. Here is what you can do to flag matks:

Unflagging matks will restore default visibility to their posts.