When I've had a rough day at work, I need something creative to unwind. A few years ago, I re-discovered Legos, one of my favorite childhood toys. It started when I got an Architecture Studio set as a Christmas present from my husband in 2014. The studio contained a little bit over 1000 pieces, and they were white in color to keep the focus on the form and function, not distracted by colors. I soon started to expand the collection by ordering more white parts from Lego's own Pick a Brick service and a previously unofficial market place BrickLink which is nowadays owned by The Lego Group. I created tens of buildings with only white pieces until I started to crave more colors. Last year, in addition to more colors, I discovered a whole community from Finland, Palikkatakomo, whose members, mostly adults, share the passion I have. From that point on, my collection of pieces has expanded uncontrollably. 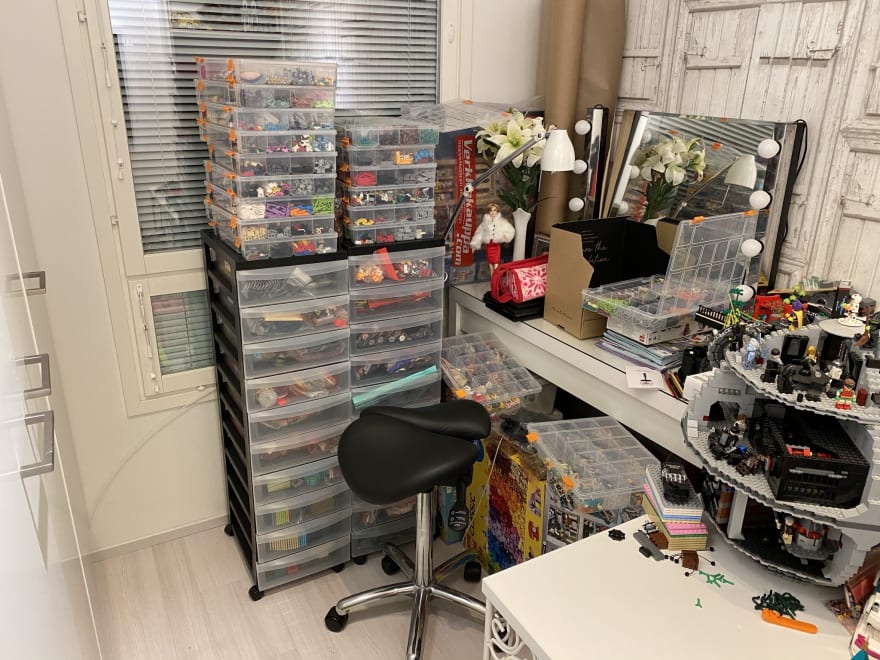 With that intro, we can get finally into the topic, how to keep it all kind of organized. In the above photo, you can see how my part of the shared Lego room looks nowadays when I'm in the middle of a project. Not an interior decoration magazine quality type of photo, even though I like to take those too, but from the other rooms. As you can see the space is quite tight, closet in one direction, the make-up table in the other. There's just enough room in the middle to spin around with a saddle chair.

That space hasn't been always that tight. First, I bought a few of those boxes which are in the cover photo. They are probably meant for some screws and other small bits and pieces. Now they include my smallest Lego parts. I categorize them first by function, and if there's enough of them to take many compartments, I also categorize them by color. If there's plenty of them, each color gets its own compartment, or even more. Usually, there are not so many of them so I put two to three colors in the same compartment, but I select the colors so that they have plenty of contrast to each other so I can separate them easily.

In addition, I also had a couple of bigger Ikea "sugar bite" style storage boxes for all my white pieces, but no room where to put them, so they have been laying on the floor. Until this day, they still do. You can barely see a couple of them under the make-up table. Very soon I found out I need something like ten times more storage space. 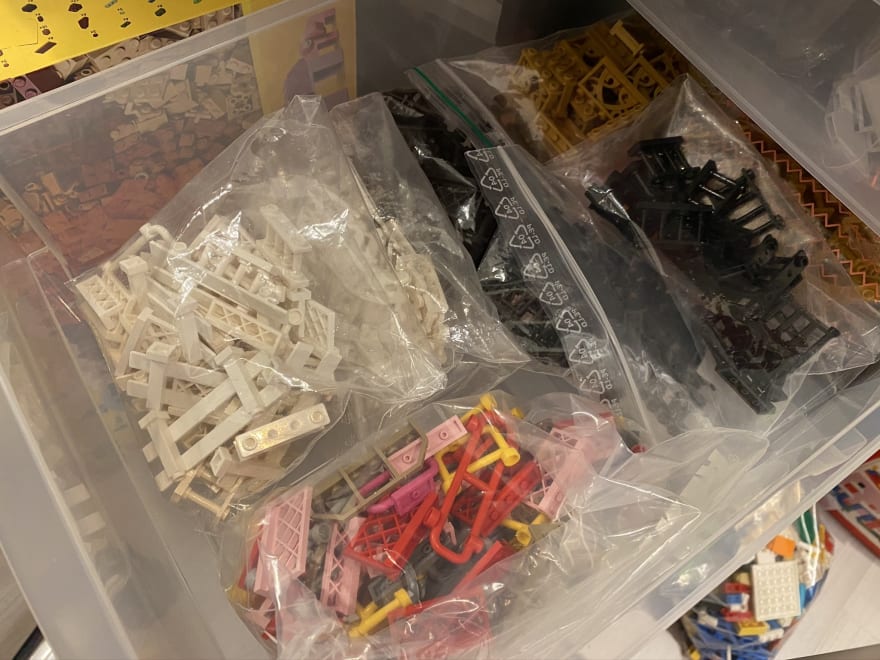 Luckily under my hobby desk which I have used for assembling puzzles, creating jewelry, and as a Lego assembly desk, I had some room to put two six-store cabinets. In those, I store fences, windows, doors, furniture, arches, curved pieces, windshields, columns, and some various wall making materials like palisade and masonry bricks. Those cabinets have wheels, and in this case, the wheels were pretty important because my make-up table was blocking some parts of the access for other stuff under the hobby desk. Probably you can guess what I meant with other stuff... more Legos. A box with my rarely used pieces and some set instruction books. Actually, even though I've always categorized myself as a nerd, I haven't been very attracted to Technic Legos, and thus they end up being my most rarely used pieces. 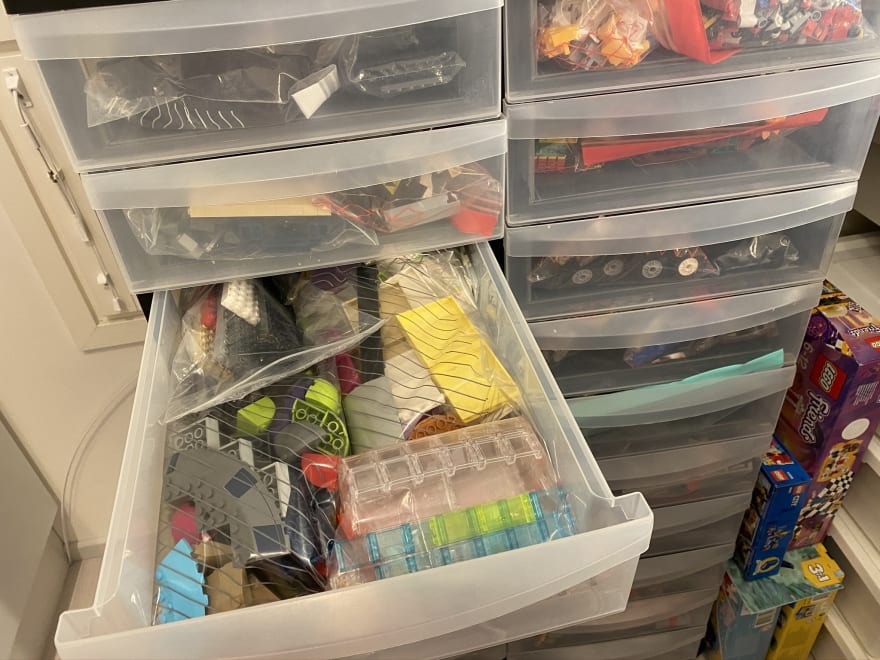 Soon I bought two more of those storing cabinets, but now as a 10-story version. This time I also had a small problem that wheels did solve, again. There was no room to open both the clothing closet and make-up table drawer at the same time, so wheels helped because I could move the cabinets out of the way in the direction needed at the time. The only problem I found is that the cabinets are not very sturdy material, and they are heavy because they are full of Legos so when I try to move them, they easily just bend if I don't take a proper hold of them. At the moment they are storing car parts, other machine parts (ships, space ships, whatever you imagine), castle parts, bigger plates, and other bigger stuff like water slides and skate park ramps.

Those two cabinets also provided me a space to store those bits and pieces boxes on top of them. I ended up finally buying 18 of those, and I should buy some more because now they are all full. The problem is that I just don't have any space to put those anymore because the piles of those boxes are already dangerously high. 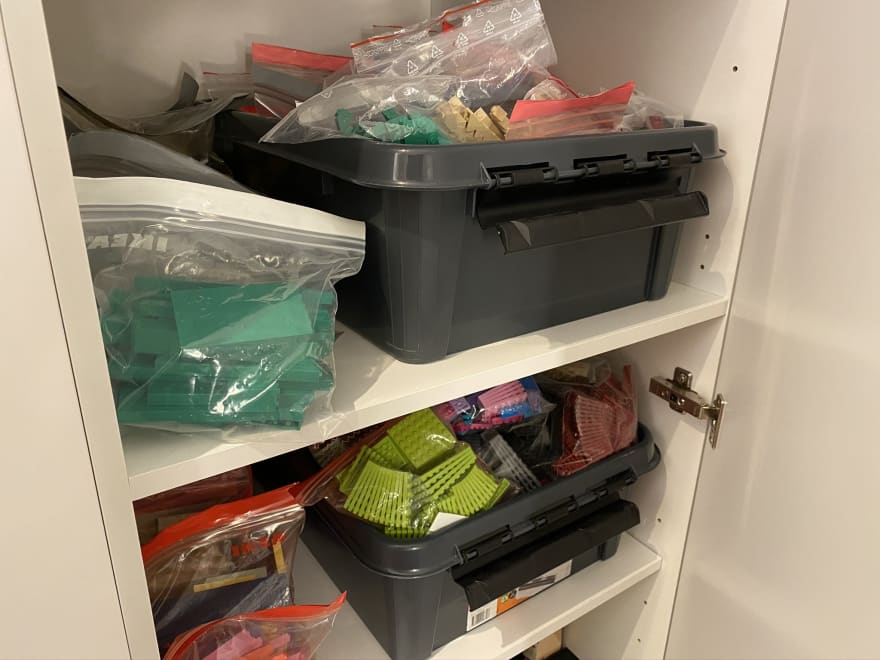 Aaaand finally gone are my clothes. I had to take a few very serious KonMari moments to get rid of two closet shelves of clothes to fit some Legos instead. Luckily there were plenty of clothes I hadn't worn in ages so that part was not that hard. Those shelves quite snuggly did fit all my narrow basic bricks, small rectangular plates, and all roof slopes. For two studs wide pieces I have a separate container.

In addition to these contained spaces, I still have plenty of unopened packages. Some I'm planning to assemble as is because I'm a huge fan of Expert Series Modular Buildings. I have a few of them already assembled (Assembly Square, Downtown Diner, and Bookshop) and a couple of them waiting for assembly (Parisian restaurant, Palace Cinema). Other packages will be categorized as loose pieces. I use ReBrickable to categorize all my loose parts and I've now reached 50k bricks. Even though that might sound a lot, I'm always missing some pieces from here and there, even if building something quite small. If you read this far, here's a cute little Lego porcupine for you: 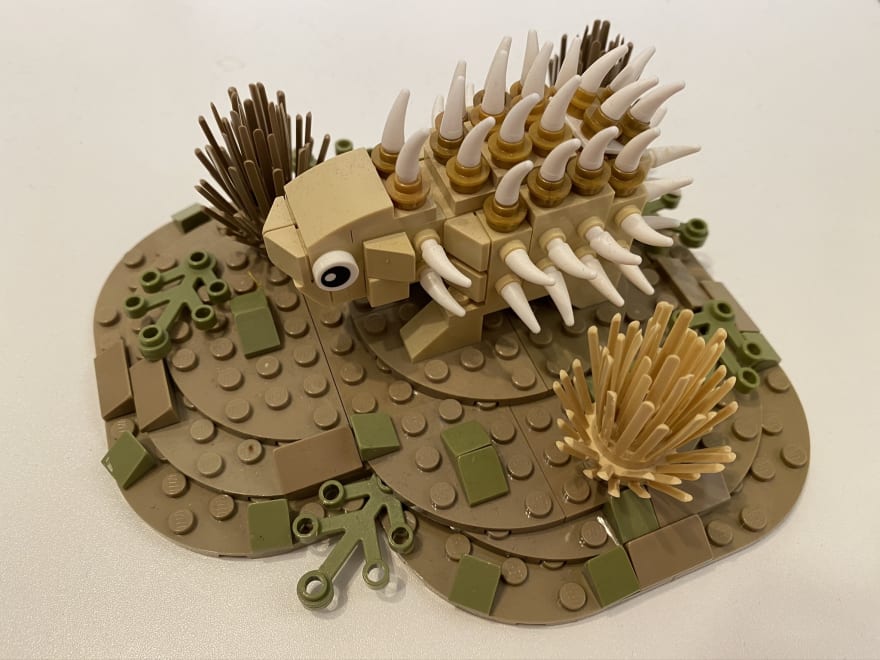 To be or not to be a Fullstack Dev?

As a developer, how to estimate the time for a task?

Once suspended, matrixx will not be able to comment or publish posts until their suspension is removed.

Once unsuspended, matrixx will be able to comment and publish posts again.

Once unpublished, all posts by matrixx will become hidden and only accessible to themselves.

If matrixx is not suspended, they can still re-publish their posts from their dashboard.