The company I'm working for recently set a code coverage rule requirement. Although I believe tests improve the software quality and help developers to write code with confidence, I'm strongly against this coverage rules. I believe this metric should never be used as a target. But first, let's understand how code coverage works under the hood.

This article is intended for web application testing. Not for a library (open source or not).

How Code Coverage is generated

will be rewriten as:

A global counter object cov_2mofekog2n is created for this file. This object's have key that stand for:

As Benjamin Coe mentioned, this way of measuring the coverage changed had now. Code coverage is now computed on Node V8's side. But, the idea of a global counter remains the same.

Now we have seen how this metric is computed, let's see why we shouldn't use it as a target.

We can take the previous code example and add the following test.

The example itself might sound ridiculous because dev usually don't write empty functions or tests like that. Ok.

With a test like this, it's super easy to get high coverage. However, this test doesn't test anything related on how the product itself is rendered.

Code coverage doesn't give any indication of what is actually tested.

Reason #2: Dev focus on coverage instead of confidence

If I continue with the shop example. We still have one test that tests almost nothing (but covers a lot!).
When I get the code coverage report, it says that one scenario is not tested: when one product is available.

According to you, what is the next step now?

If you are in a company with a xx% code coverage requirement, you will be more inclined to "cover" code to bump the score.

We were supposed to write tests for confidence. Confidence to ship code that works as expected. And we ends up writing tests for metrics. A nonsense!

Also, if you have a xx% code coverage policy, it means you're expecting the same level of test across the whole application. Do you think that a hidden settings page and a main feature deserves the same attention?

"When a measure becomes a target, it ceases to be a good measure"

In one of my previous experiences, I was granted as a tech lead. I thought it could be a good idea to set a 100% code coverage policy. I thought it was something good to enforce the code quality. I was pretty proud to have a 100%cc and keep it over the time. And one day I got disillusioned when I went through the code base.

Some dev didn't write code for confidence but to make the CI build green. As we saw before, if you understand how code coverage works, it's super easy to trump this metric.

Here are a few example of low quality tests:

Not all code need to be tested 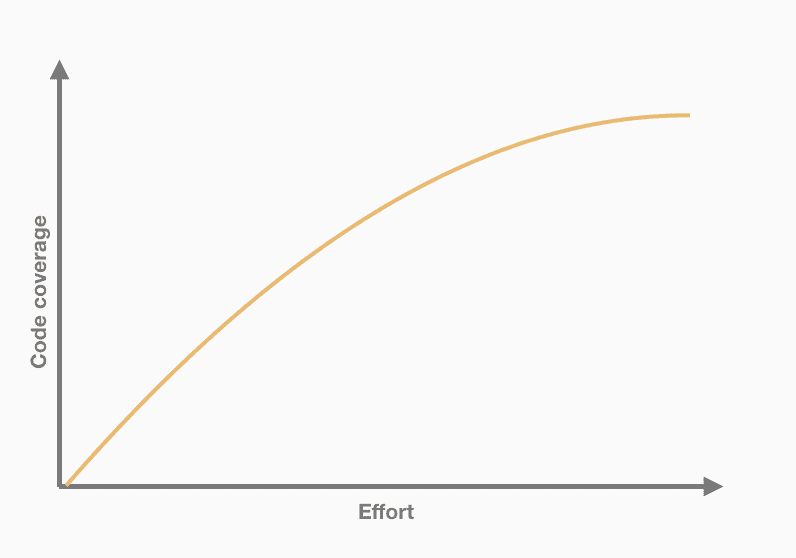 Before giving my talk about Frontend Testing, I asked developers why they don't test. Without any surprises, most of them told me: "we don't have time to test". When I asked my maker friends, I heard the same song.

Sometimes the amount of time invested on writing tests does not pay off. Because of the time consuming aspect or because devs are flooded by too many tests.

That's more or less what Kent C. Dodds explains in his famous post Write tests. Not too many. Mostly integration.

Wrapping up: should we throw out the baby with the bathwater?

Sometimes, but not always, Code Coverage can help to highlight untested parts of an application. But it's just a metric. So please, use it as a metric, as a tool to help you to take the right decision. Not the opposite!

Thanks for reading this article 🤘. I hope you found it useful! If you liked it, please give it a ❤️ or a 🦄! Feel free to comment or ask questions in the section below or on Twitter (@_maxpou).

Boilerplate with MERN Stack + Redux + JWT for registration, login and authentication of users with CRUD operations.

5 Projects You Can Build To Become a Better Web Developer