The objective of this essay is to highlight the scope and use of advanced functions in javaScript. It is aimed at programmers who find it difficult to understand the concepts dealt with here. In this article, we are going to tackle advanced functions so that they can be really grasped and understood. The best way to do that is to practice them yourself then use the write up as a reference and as a guide. The topics covered are those that you will mostly see out in the wild.

Scope can be said to be the context in which values and expressions are visible and can be referenced. If a variable or other expression is not in the current scope then it is unavailable for use. Scopes can be layered in a hierachy so that child scopes have access to parent scope but not vice versa. Variables defined only within a function cannot be accessed from outside a function or within other functions.

Let us take a look at this function

As you can see in the image above, after running this, it throws a reference error. This is because the

Here we are setting a variable called globalVar outside any other scope. Then inside our consult function, we are accessing this globalVar variable. Looking at the image above, we can see that we have access to the globalVar variable. Every other scope within this module has access to the globalVar variable. It is often best practice to avoid setting variables in this manner if possible. We want to avoid other parts of our code accessing and changing values that are used elsewhere which can lead to unexpected behaviour.
Another type of scope is the Block scope. Let us take a look at the sample code below

An important javascript concept is CLOSURES. Closures can be thought of as when a function runs and it gets executed. The function is never going to execute again though it will remember that there are references to those variables. The child scope is always going to have access to the parent scope. When we run the code below

function and assigned it to the

above. It is going to remember that there are references to those variables alive in the memory

so that when calling the variable

the memory can have access to the parent scope. In reality, the code block executed will look like

The function second is what we are really returning here. We can see that the variable

is not within the scope of second here

always has access to the parent scope. It's almost as if it remembers that there is references to those variables

so that the web browser remembers that the child scope needs the variable greet.
Even though

is never going to run again the web browser remembers the

Think of the arrows above as functions. Let us run the function and see what I mean

The above code returns a function that is 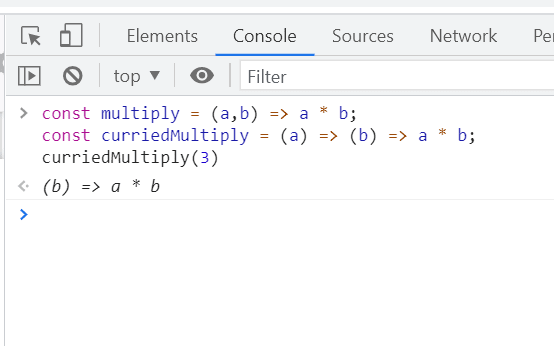 which means running the code

where the number 3 will be assigned to

To make it work, we can say

On running the above code we now get 12. Let me break it down. We created a function

that accepts a parameter

and the function multiply

and the number 12 is gotten.
Now, why do we need to do this? We do this because it makes our code more extensible. For example, we can now do something like

so that anytime we want to multiply a number by 5 we will have a function that was created that always multiply things by 5.

Another important concept in javascript is COMPOSE. Compose is the act of putting two functions together to form a third function where
the output of one function is the input of the other. It is a really advanced concept in javascript which takes some time to grasp but
once it is understood a programmer can do anything. Let us give it a go
Example

What we can do with compose is we can

If the above code is run on a javascript engine we get 9 as the output. Let us take it one at a time

When we run the above function compose it returns

When it runs it says

is 5. now the inner function

is run. Here g is sum so we have the code basically saying

means get me a num and add 2 giving us

which gives us 7, and now running the f function

That was a whole ton of stuff. I want you to remember the keywords we just covered because, in advanced javascript, functions are really really important. You will hear these words a lot and you will find tools and libraries that use this heavily. You don’t need to know the definitions, all you need is to read a piece of code and understand what is going on beneath the hood. By understanding the step by step process of how a function works, when you encounter them in the wild, you will understand how everything works.

SIDE EFFECTS AND FUNCTIONAL PURITY

When we create a function and we give it an input with or without a parameter, the function returns either a value or an undefined. Side effects are any action that happens inside the function that we don’t really know anything about. It reads, writes, or reacts to an external variable without our control. This is a side effect. Let us take a look at an example

Functional purity is a concept where we say in order to write really good programs, we want to avoid side effects and always want to return a value. By avoiding side effects and returning a value, we create deterministic code. Whereby no matter what we input into a function, it will return a value that will be the same. It is a key principle in avoiding bugs.

Once suspended, mcube25 will not be able to comment or publish posts until their suspension is removed.

Once unsuspended, mcube25 will be able to comment and publish posts again.

Once unpublished, all posts by mcube25 will become hidden and only accessible to themselves.

If mcube25 is not suspended, they can still re-publish their posts from their dashboard.

Once unpublished, this post will become invisible to the public and only accessible to Muhammad Muhktar Musa.

Thanks for keeping DEV Community 👩‍💻👨‍💻 safe. Here is what you can do to flag mcube25:

Unflagging mcube25 will restore default visibility to their posts.