There are several "lightweight" Ruby web & API libraries out there.
Sinatra is probably the most known but there are others that are newer, faster, cleaner, more flexible and/or better maintained.

One of those is Roda, created by Jeremy Evans, the creator of the Sequel gem. It started as a Cuba fork but then evolved a lot. It is specially notably by its speed and plugin system, shared characteristics with its sibling Sequel gem, where everything can be overridden.

It is auto-defined as a "Routing tree web toolkit". Why is that? Because of the way the routes are defined & run. Let me show you an example:

If you compare with other libraries like Sinatra, instead of setting the @artist variable and checking the access is allowed in all three of the actions, the variables are set as soon as that branch of the tree is taken, and can be used in all routes under that branch. This is why Roda is called a routing tree web toolkit.

More examples of the routing flexibility:

Roda's plugin system design is shared with the Sequel gem but also copied in other projects, like in the Shrine file attachment toolkit, Cuba(v3).

You can start with a small, compact core of an application and grow complexity over time and learning as you go, having fine grained control on features and performance.

Do you want a JSON API? The json plugin responds with JSON automatically for arrays & hashes:

But you can customize it easily, for example, adding ActiveRecord relations:

The complete list of bundled plugins is huge, more than 90, and there are several community extensions, so you are pretty much covered here. In case you want to do one, this is the structure:

An image is worth a thousand words. Compare the request per second and the memory usage: 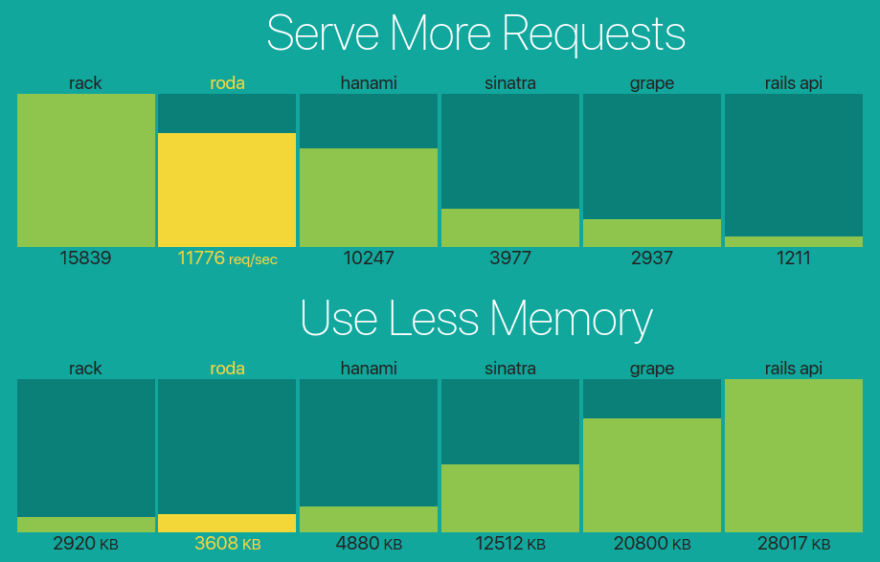 Pretty close to raw Rack values, but with a nicer DSL.

What is SEO and how to do search engine optimization? Explained for begginers.