I was lucky enough to be accepted as an intern at the first unicorn in my country that goes IPO for software engineer position, as a large tech e-commerce company that exist for 11 years the technology used behind must be quite mature, and more complex than usual (micro-frontend, micro-services, different virtual private network to access certain repository, private npm library, etc.).

I've been using windows since my first day of college as a computer science student, and I should say that there is a few moment where I'm really stressed spending hours setting up the development environment (PATH, and mostly adjusting incompatible library). But I hit my breaking point a few weeks ago, due to incompatibility with my company codebase that is developed in UNIX operating system (like Mac or Linux), here's the list of my main problem :

My friend keep suggesting me to implement dual boot, but I'm quite afraid that my machine will break down, or something will go wrong during the installation since I'm using a quite old machine (ASUS x550j from 2016). Hence I'm looking for alternative solutions.

I still want to play valorant during my work hours #oops. Hence I tried WSL, unfortunately I had a difficult time setting up openvpn in WSL due to certain networking issue. Without vpn I couldn't run the repository that I was working on. After a few cup of coffees, I finally give in to dual boot.

In the end , I decided to implement dual boot in my machine. I'm following this tutorial from youtube to install Ubuntu along with my windows OS. Now, why Ubuntu ? why not arch-Linux? or other cool distros? Simple, I'm not a hardcore Linux fanboy, and there is this class in my 4th semester that teach terminal with Ubuntu, hence I've previous familiarity.

Here is few things that I noticed:

As an engineer, I highly suggest you to move from windows to UNIX based like Linux or Mac as soon as you can. Here ! Have some Linus Trovalds Meme!. 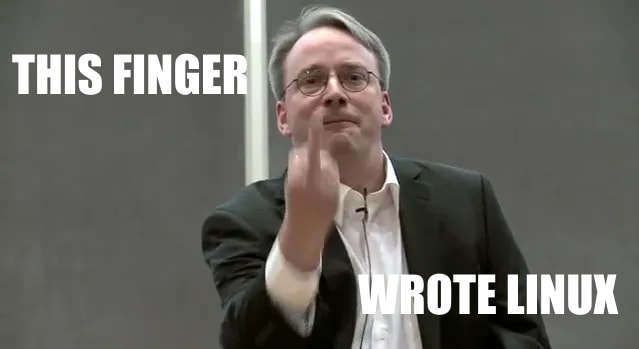 "The name org.freedesktop.secrets was not provided by any .service files"

Melvin Liu
Engineer by nature, I write sometimes, but I make sure each post is worth your time
Why I Decided to Invest in My Portfolio as a Junior Developer
#webdev #career #codenewbie #help
Meme Monday 🫵
#jokes #watercooler #discuss
Announcing the Linode + DEV Hackathon!
#linodehackathon #linode #meta #linux

Once suspended, melvnl will not be able to comment or publish posts until their suspension is removed.

Once unsuspended, melvnl will be able to comment and publish posts again.

Once unpublished, all posts by melvnl will become hidden and only accessible to themselves.

If melvnl is not suspended, they can still re-publish their posts from their dashboard.

Once unpublished, this post will become invisible to the public and only accessible to Melvin Liu.

Thanks for keeping DEV Community 👩‍💻👨‍💻 safe. Here is what you can do to flag melvnl:

Unflagging melvnl will restore default visibility to their posts.