While we were moving all our Frontend apps into a monorepo, which is backed by yarn workspaces we encountered a somewhat unexpected problem of misbehaving code in one of the deep dependencies.

If you ever worked on even a little big bigger project using yarn you will know that this can easily mean tens of thousands of changed lines.

In theory, this should be fine as semver should guarantee that nothing should break as long as we're pinning packages in a proper way. In theory. Realistically speaking this broke some tests and our CI was red.

And now the £10000 question is: How do you find out which dependency is the problematic one? One of my coworkers had a great idea to hunt for the flaw in the application-A repo instead of the monorepo so that we can see the diff of the packages that changed.

And now used git bisect to do all the hard work!

If you don't know git bisect the tl;dr is: Mark one commit as "good", one commit as "bad" and create a script that can run a test to determine whether a given commit is "good" or "bad". Git will then run a bisect algorithm to automatically find the first "bad" commit for you automatically.

And now the cool part: 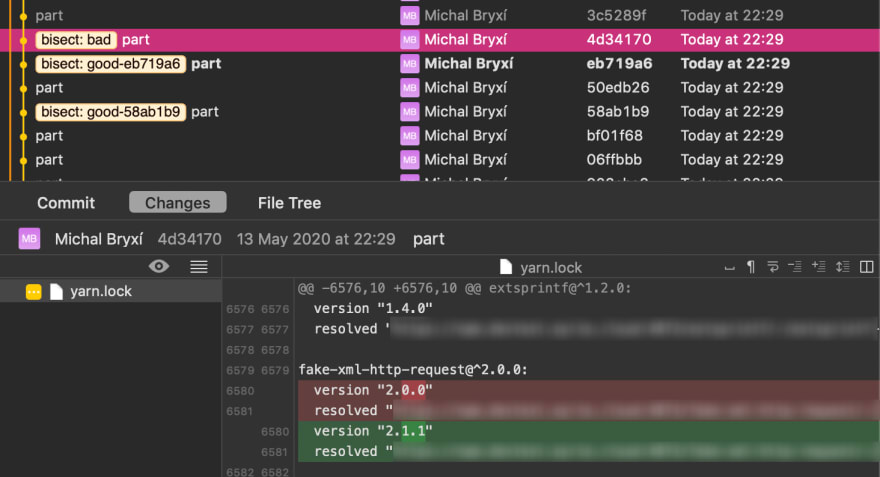 The resolutions section in our case was:

This gave us a "pixel-perfect" pointer to the problematic part in a huge diff of one file. I believe this technique can be leveraged in other scenarios as well.

As long as you can write test script for git bisect, it should work for you.

The trick of dividing one big diff to multiple commits is the "new" part here. And I think the one-liner above can work in many different situations.

My Journey Through Array Iteration Methods

Migration to create tables in database for MSM Sign in