This post first appeared on my blog at www.mikenikles.com. Photo by Jessica Lewis on Unsplash

Experience it for yourself

Before we go into the details, you can experience Cypress end-to-end tests running in a virtual environment in your browser with the following link:

Click the "Login with GitHub & Launch Workspace" button, follow the instructions and you will be up and running in a moment.

Once npm install completes automatically, a development server starts in one terminal and Cypress starts in a second terminal. Besides that, a second browser tab will open with a virtual desktop where, after a minute or so, you will see the Cypress UI.

The first browser tab shows the editor (the errors in the console can safely be ignore): 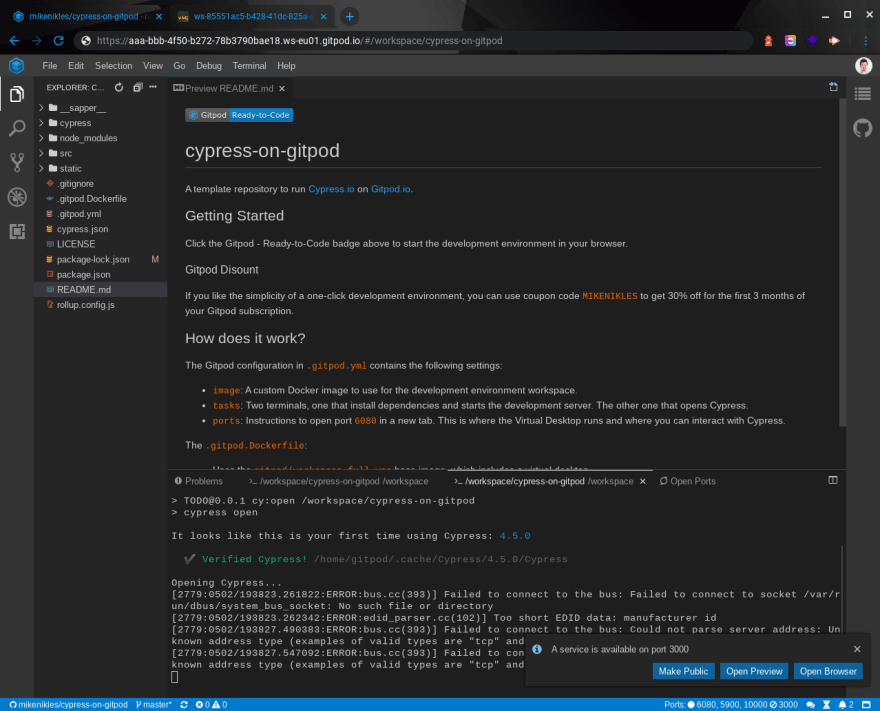 Whereas the second browser tab provides the Cypress UI (in this case, it's a default Sapper application): 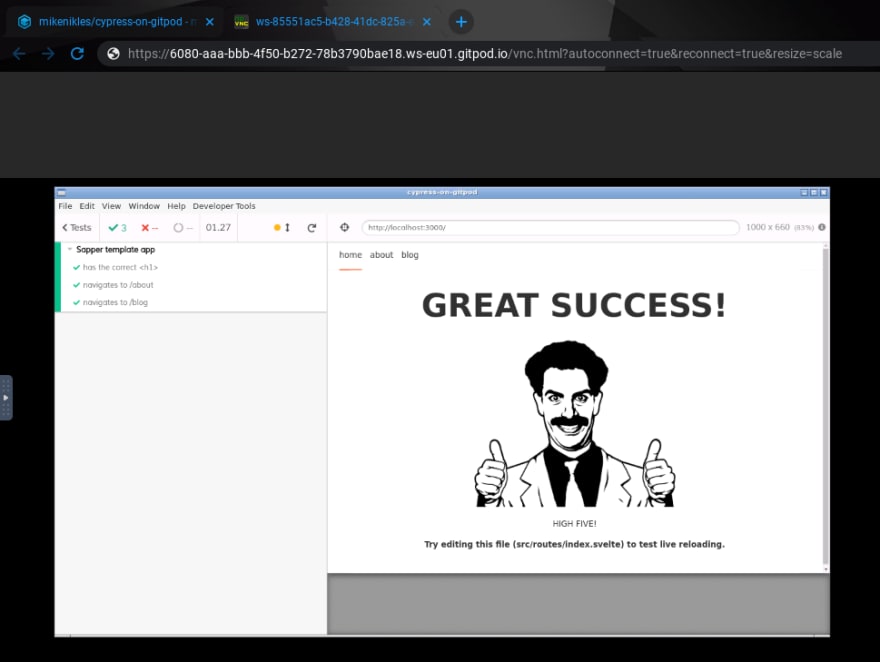 If you like the simplicity of a one-click development environment, you can use the coupon code MIKENIKLES to get 30% off for the first 3 months of your Gitpod subscription.

What is required to make it work? (Pull Request)

The source code is available at https://github.com/mikenikles/cypress-on-gitpod.

The first thing is to add cypress as a dev dependency with npm i -D cypress. This ensures it gets installed like any other dependency when npm install runs.

Next, we need a .gitpod.yml configuration file to configure a custom docker image (more on that in a minute), a few tasks to run when the development environment loads and some port definitions. Let's look at that file section by section:

This instructs Gitpod to use a custom Docker image, as defined in the specified file.

In the second terminal, the init command waits until the temporary file is no longer available. When that's the case, we can be sure npm install completed in the first terminal and all dependencies are available. We then open Cypress with the provided cy:open NPM script.

As defined in the .gitpod.yml configuration above, we define a custom Docker image in .gitpod.Dockerfile as follows:

We use a base image provided by Gitpod. Next, we install the dependencies required by Cypress as documented.

A few lines of configuration and we're up and running with Cypress on Gitpod.io. Make sure you have a look at the pull request where I provided a few annotations in the code.

If you want to learn how to develop modern, cloud-native web applications end-to-end, please sign up for updates at https://gumroad.com/mikenikles or follow me on Twitter @mikenikles. The book features content such as this blog post with more details and additional stories based on my two decades of experience in developing software.

Svelte, why so much hype ?