Union types are fairly popular in TypeScript. You might have already used them multiple times. Intersection types are slightly less common. They seem to cause a little bit more confusion.

Did you ever wonder where do those names come from? While you might have some intuition about what a union of two types is, the intersection is usually not understood well.

After reading this article, you will have a better understanding of those types which will make you more confident when using them in your codebases.

Union type is very often used with either null or undefined.

For example, the type of name here is string | undefined which means that either a string OR an undefined value can be passed to sayHello.

Looking at the example, you can intuit that a union of types A and B is a type that accepts both A and B values.

Union and intersection of object types

What about the intersection of Foo and Bar, though?

Now sayHello requires the argument to have both foo AND bar properties. Inside sayHello it's possible to access both obj.foo, obj.bar and obj.xyz.

It sounds confusing. I even stumbled upon a GitHub issue in TypeScript repository ranting about naming of these types. To understand the naming better we need to look at types from a different perspective.

Do you remember a concept called sets from math classes? In mathematics, a set is a collection of objects (for example numbers). For example, {1, 2, 7} is a set. All positive numbers can also form a set (an infinite one).

The union of Squares and RedThings is a set that contains both squares and red things.

However, the intersection of Squares and RedThings is a set that only contains red squares. 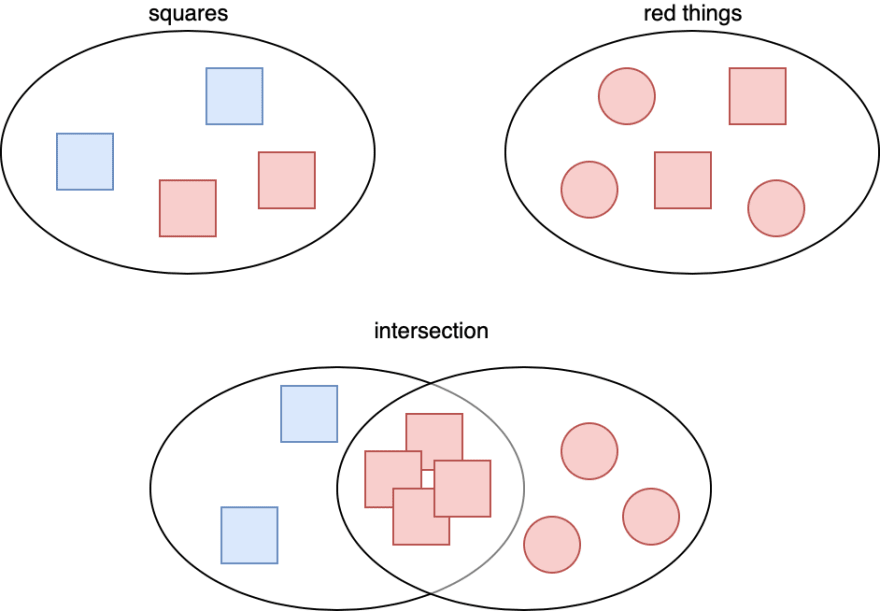 Relationship between types and sets

Computer science and mathematics overlap in many places. One of such places is type systems.

Type undefined is a set that only contains a single value: { undefined }.

What about object types (such as interfaces)? Type Foo is a set of all object that contain foo and xyz properties.

Armed with this knowledge, you're now ready to understand the meaning of union and intersection types.

Union types are quite widespread so let's focus on an example of an intersection type.

In React, when you declare a class component, you can parameterise it with thy type of its properties:

Inside the class, you can access the properies via this.props. However, the type of this.props is not simply CounterProps, but:

The reason for this is that React components can accept children elements:

The children element tree is accessible to the component via children prop. The type of this.props reflects that. It's an intersection of (readonly) CounterProps and a (readonly) object type with an optional children property.

That's it! I hope this article helps you wrap your head around union and intersection types. As it's often the case in computer science, understanding the fundamentals makes you better at grasping programming concepts.

Once suspended, miloszpp will not be able to comment or publish posts until their suspension is removed.

Once unsuspended, miloszpp will be able to comment and publish posts again.

Once unpublished, all posts by miloszpp will become hidden and only accessible to themselves.

If miloszpp is not suspended, they can still re-publish their posts from their dashboard.

Once unpublished, this post will become invisible to the public and only accessible to Milosz Piechocki.

Thanks for keeping DEV Community 👩‍💻👨‍💻 safe. Here is what you can do to flag miloszpp:

Unflagging miloszpp will restore default visibility to their posts.