From January 31st to February 1st 2019, I attended the Git Merge 2019 conference in Brussels. If you don't know what that is, it is a conference that is entirely dedicated to Git and its work methods. All the benefits from the tickets sales are donated to the Software Freedom Conservancy.

Because you seemed to like my #devlife and #devtravel posts, I decided to make a little recap about my short trip to Belgium.

I wrote a detailed post of all the talks (of the conference day, February 1st) for Welcome To The Jungle. Go check it out for a more in-depth technical recap, very much less personal than this one though.

This post is also made for those of you who are not in the tech industry and are wondering what we are talking about when we gather for a conference. I am thinking about my family and friends for exemple, which in my case are not at all developers. Those are things we don't necessarily talk about on social media because it is so common for us but I am taking you along for a ride.

I traveled by train for this conference. It is fairly cheap and quick. I used the high-speed train from Lyon to Brussels.

If going home has been breeze, going to Brussels has been a real nightmare. My train was delayed (1h30), then while I was in the train they decided to not go to Brussels anymore. So I had to stop in the North of France to catch ANOTHER train which was also late...etc.

I am glad we were two and I wasn't in charge of getting the keys for the Airbnb we rented. I am also very glad I decided to take the train a day early, I would've missed the entire first day of conference otherwise. I recommend to do that, even if it means to pay for one more hotel/airbnb night, it is worth it in the end.

I went to Brussels with a colleague. We stayed 2 days and 2 nights - workshop day and conference day - so we needed to find an accommodation.

But because we were going to be gone all day, we didn't need anything fancy.

We had a look at Airbnb's that were less than a 30 minutes from the train station, two beds and flexible arrival and departure. Brussels being the capital, we were expecting it to be pricy.

We did found an appartment 20 minutes away from Brussels' train station, 15-20 minutes walk to the conference, with two beds and a great discount on the price. So practical : we booked it.‌

I am sharing the address with you, because if you can have it discounted as we did, it is a very good deal. It is so pretty, comfortable and well-positioned.

The conference is funded by the biggest Git using company in the world — Github, Gitlab, Bitbucket — but Github is in charge of the organization.

The conference took place at The Egg, a meeting and conference center. The storefront looks pretty ordinary, the Git merge conference was made visible but those two flags. 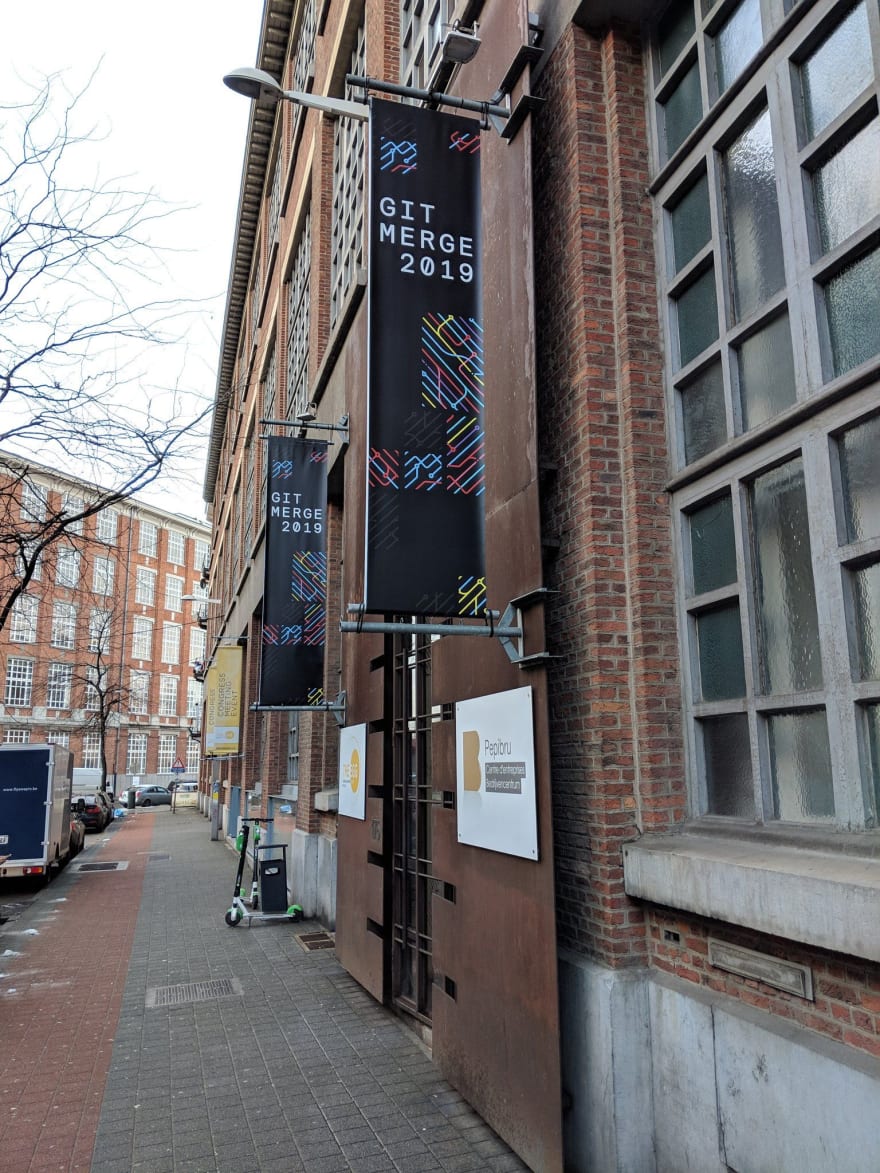 Inside, though, it is nothing short of amazing. Big spaces, wonderful rooms with a very specific decoration. I am not talking about the things Github added but the original decoration. 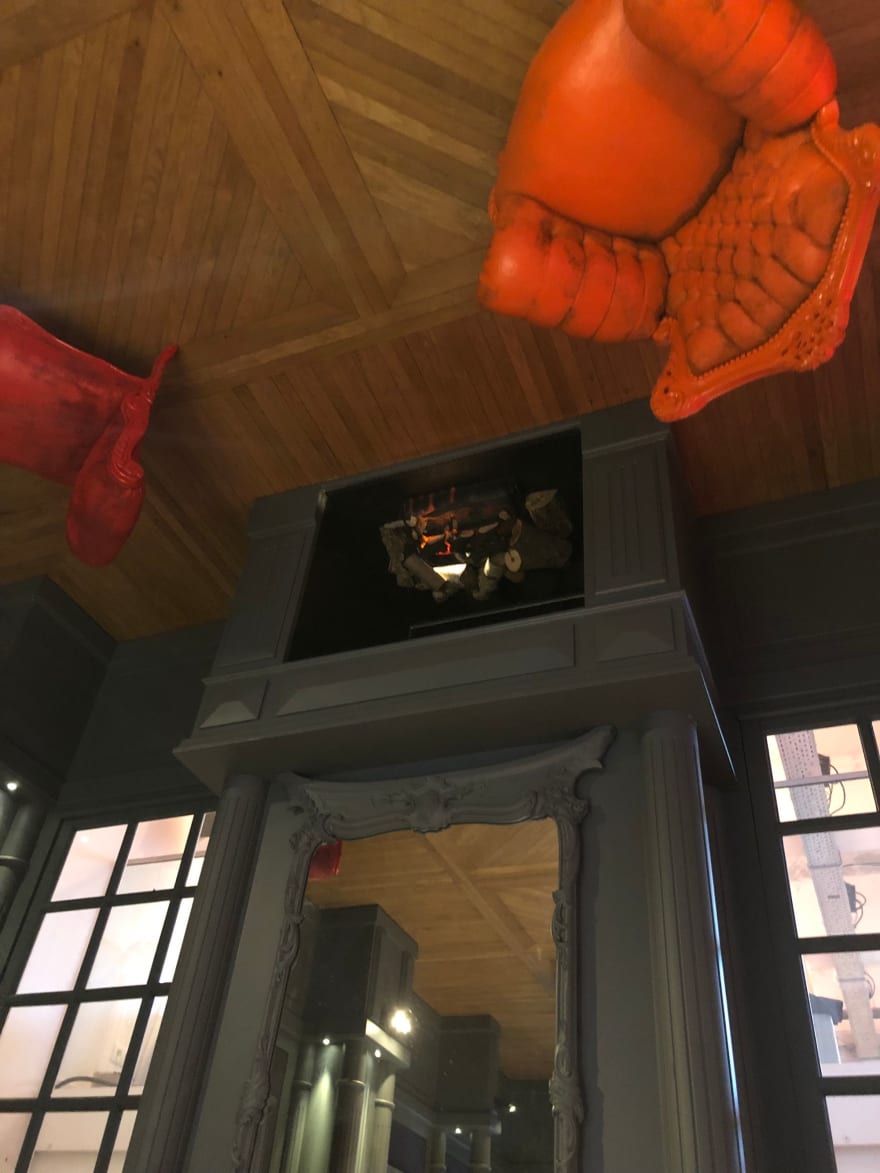 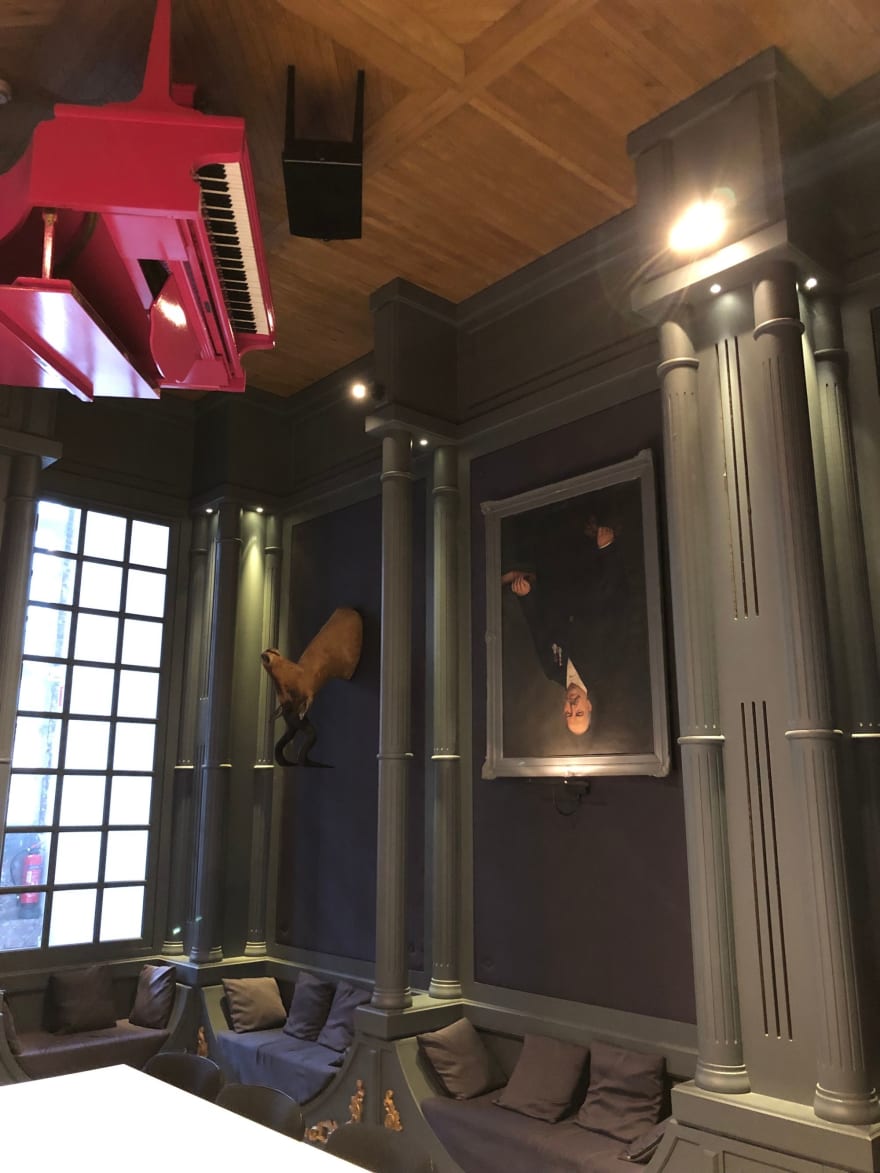 Feel like your head is spinning upside down?
<!--kg-card-end: gallery-->

The other spaces inside were pretty much all industrial style, it suits this kind of event really well. Github added some decorations and made it look pretty good. 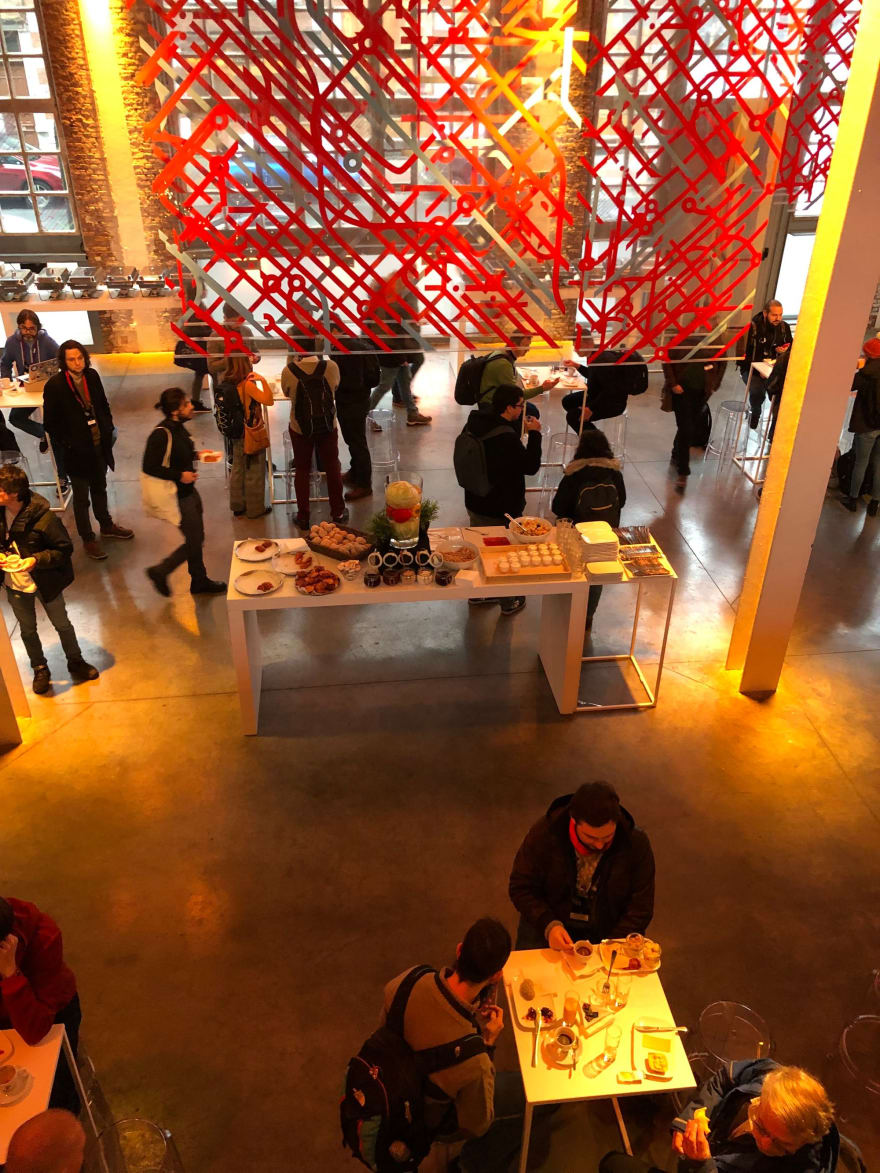 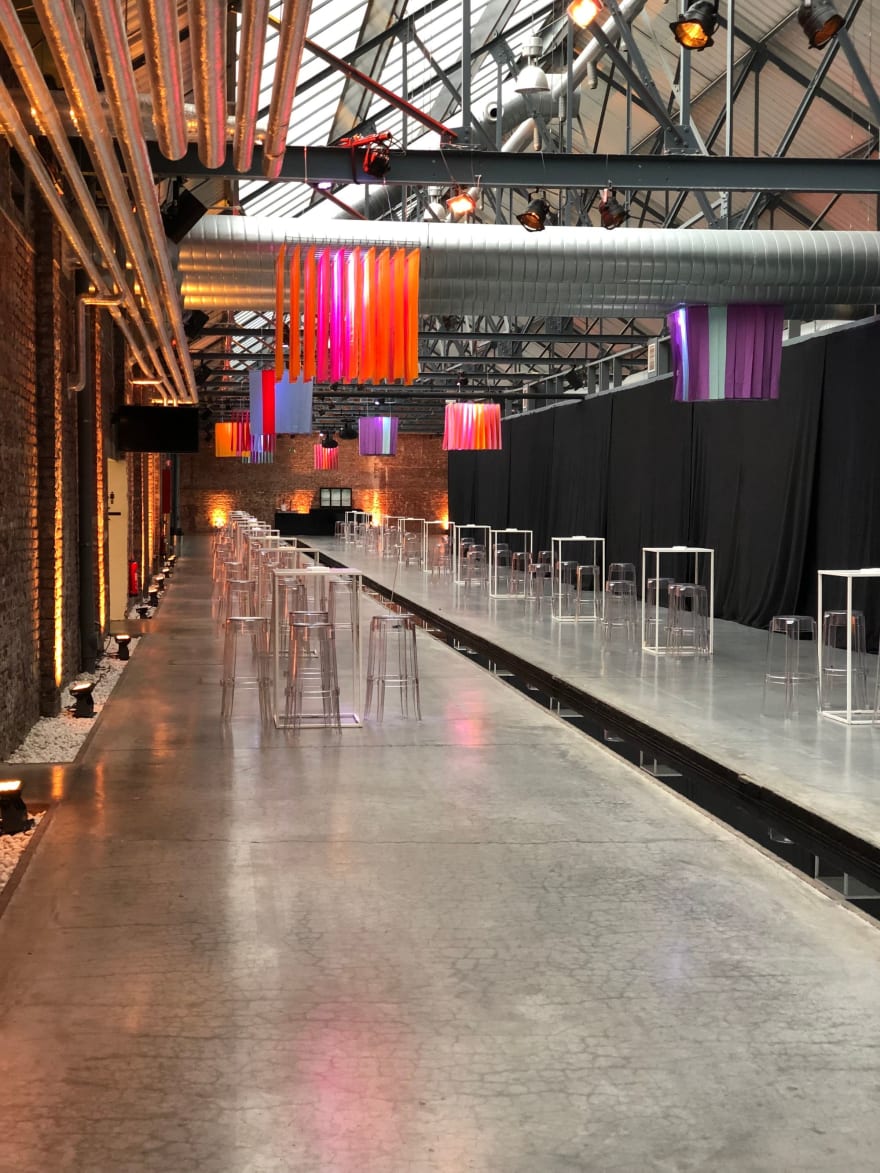 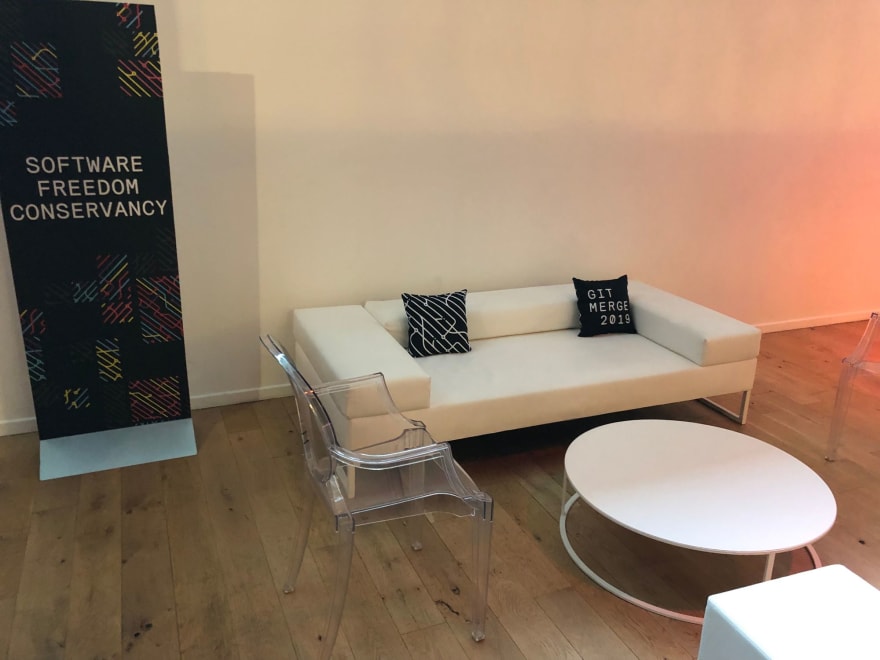 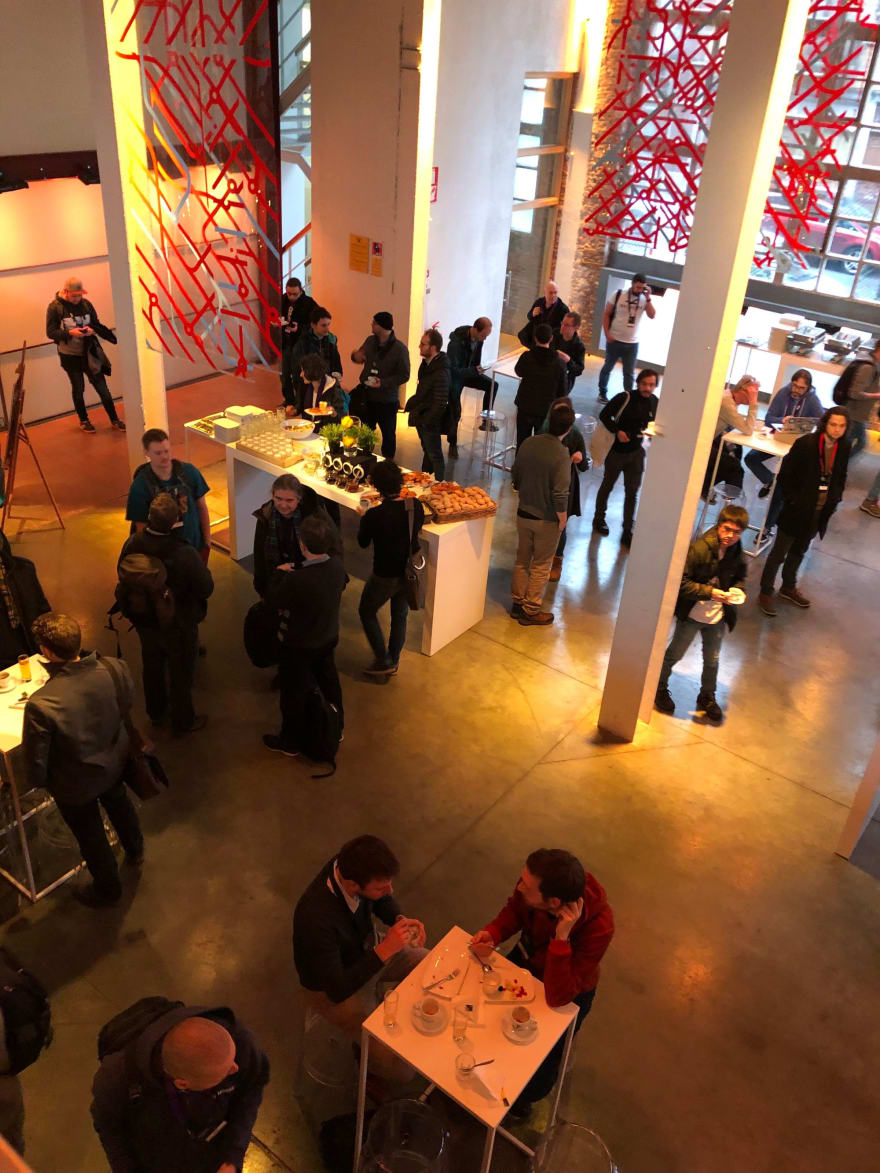 Every good dev conference (every conference I attended, at least) is a conference where the food is abundant. Breakfasts, lunchs, snacks... were unlimited. Same thing for the drinks with a special mention for the coffee which was served pretty much all day.

I was really pleasantly surprise by the food at the conference because it was not the ordinary junk-food linked to the nerds cliché. I have been used to find chocolate fountains, candy bars, burgers buffets, hot-dogs, french fries and candy floss machines.

The tech industry is evolving greatly lately on the topic. On social media, there is a whole trend of "healthy" dev, going to the gym, self-caring, sleeping. The food choice was really linked to that new trend. 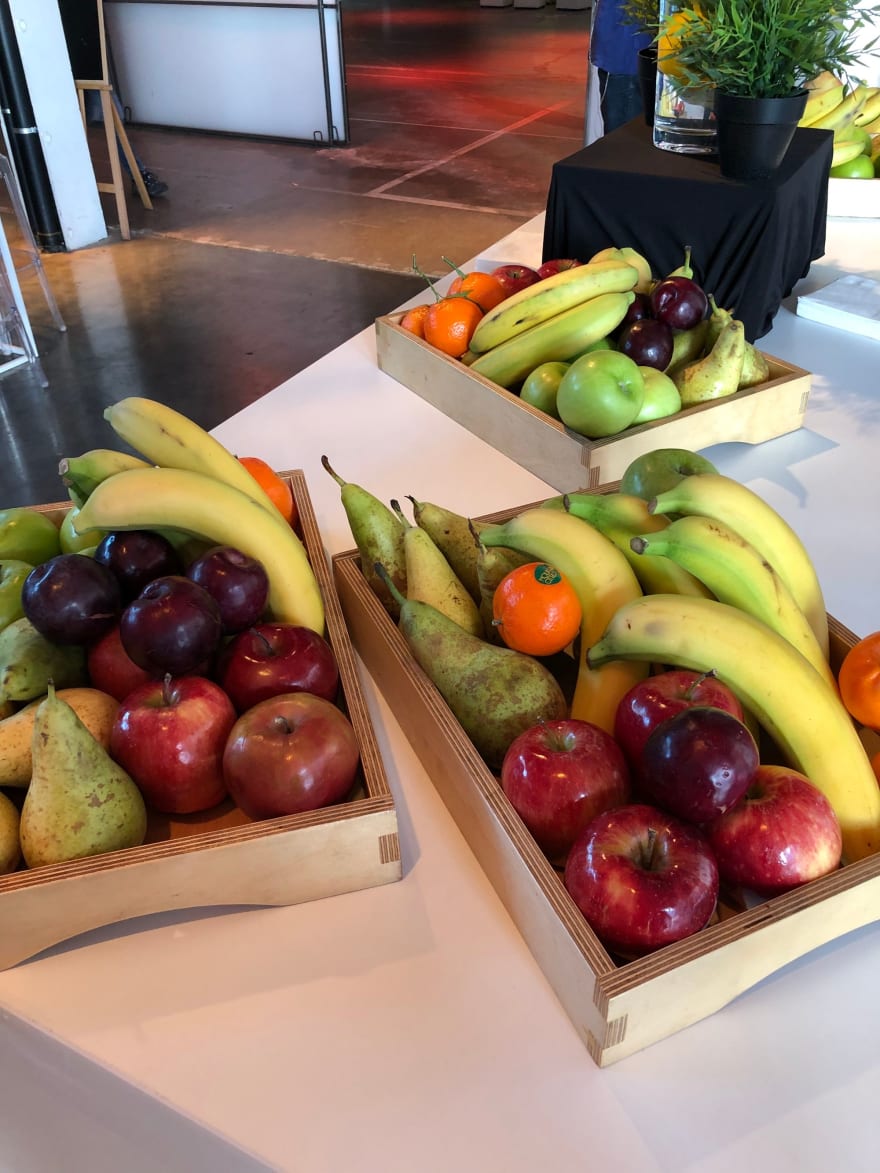 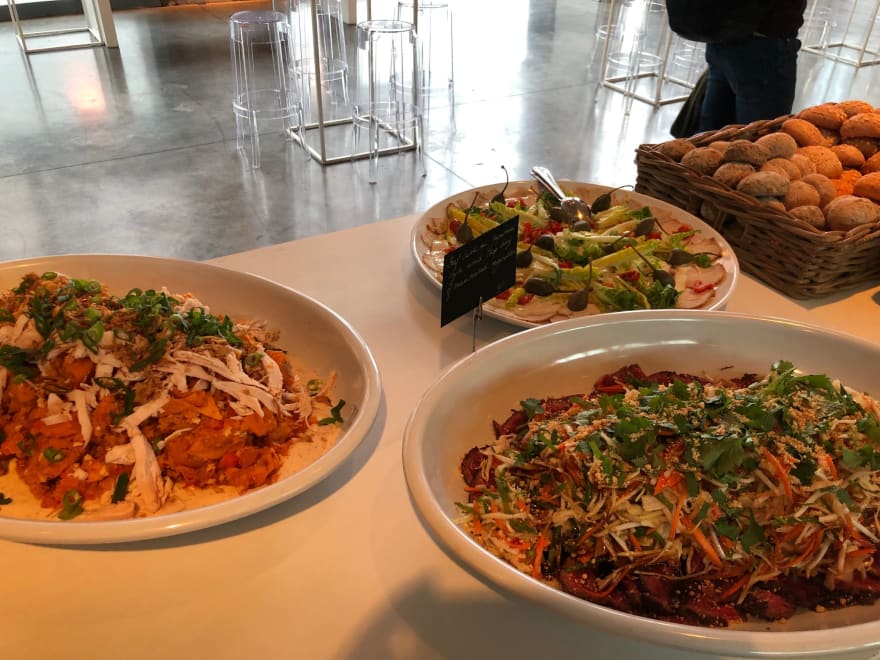 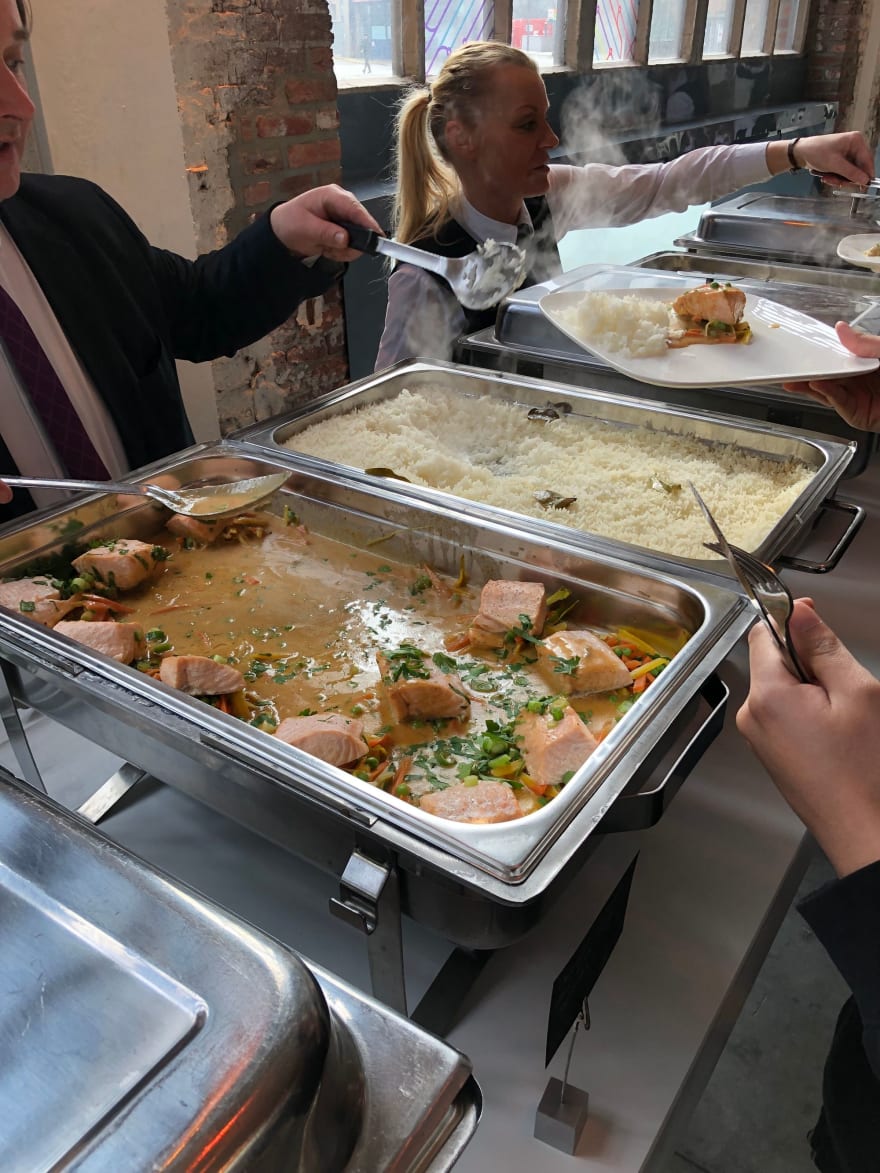 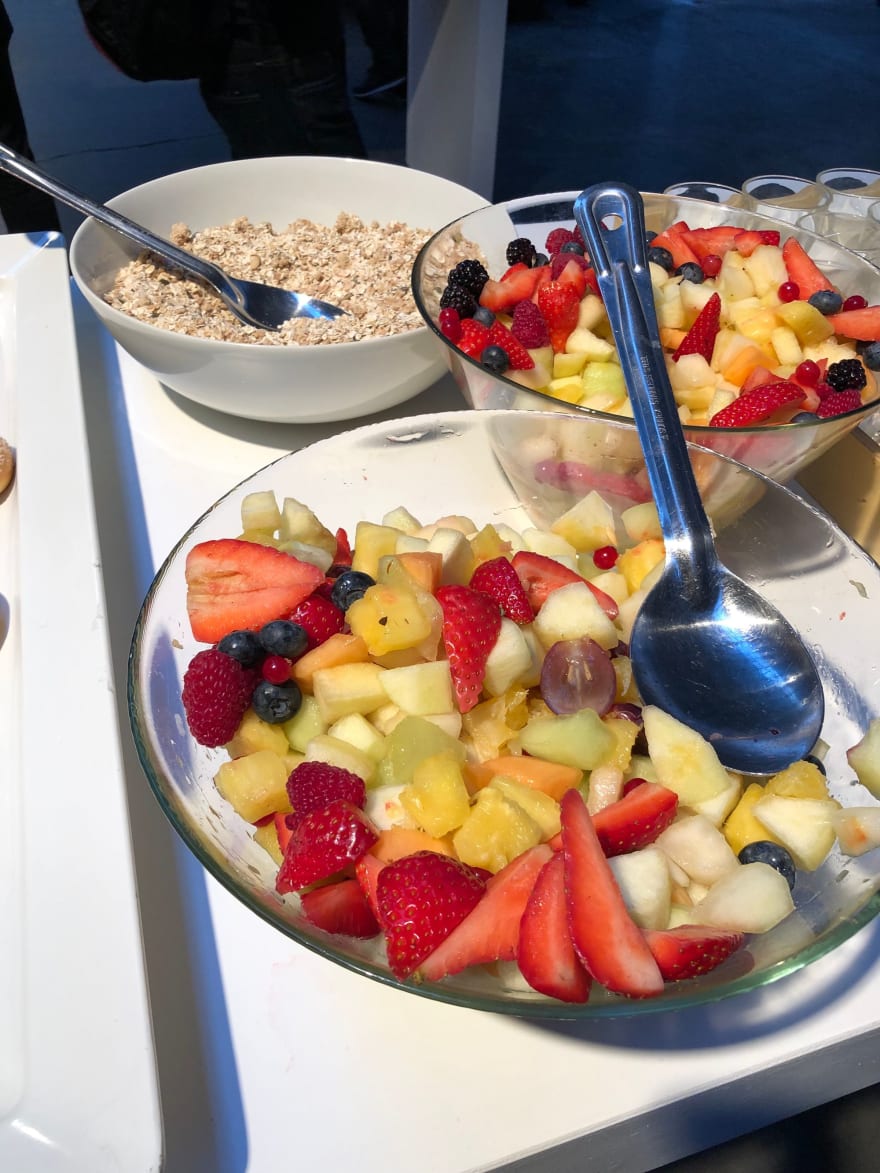 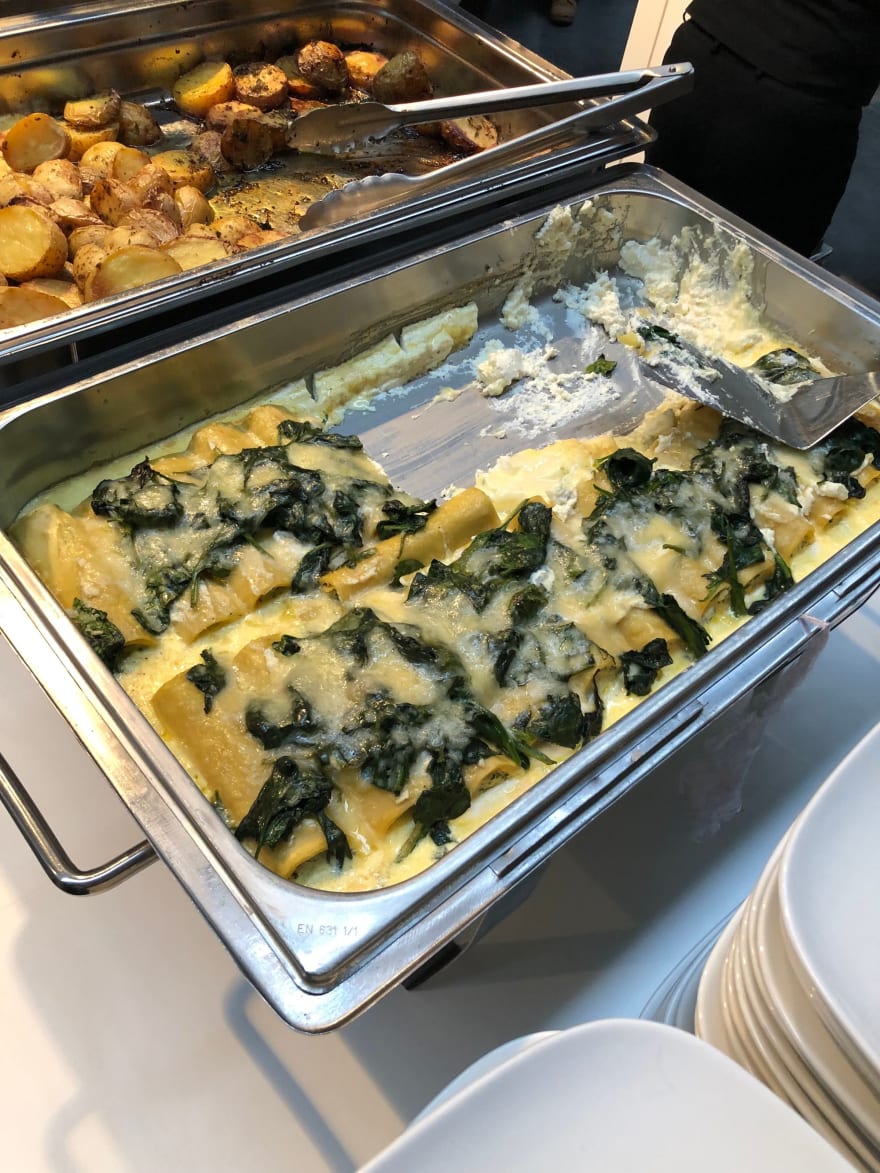 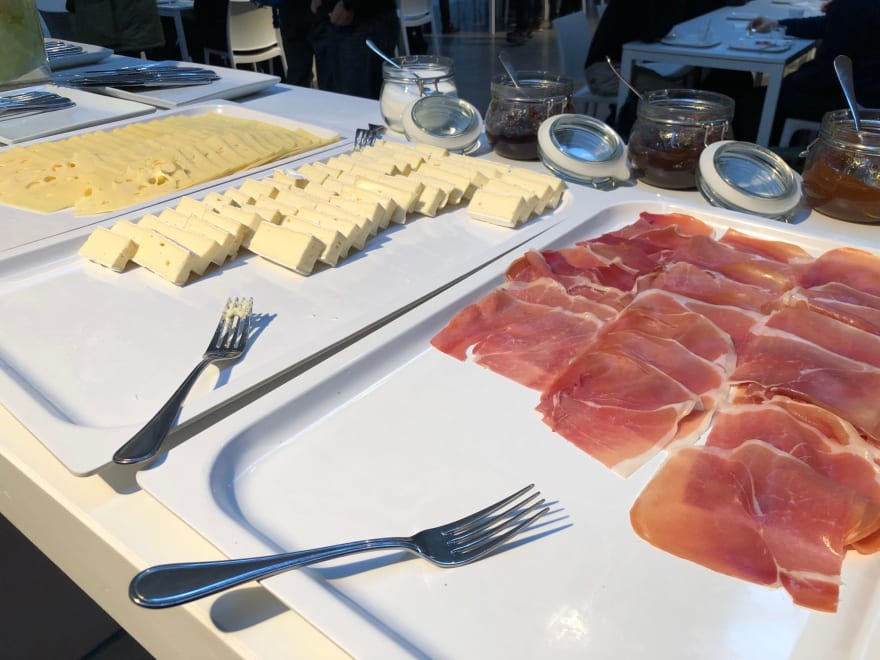 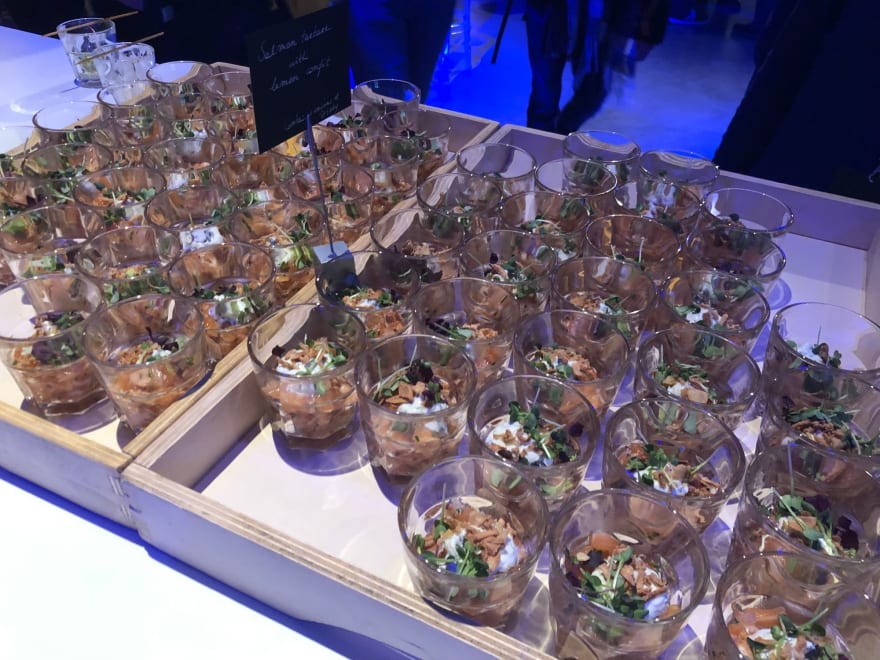 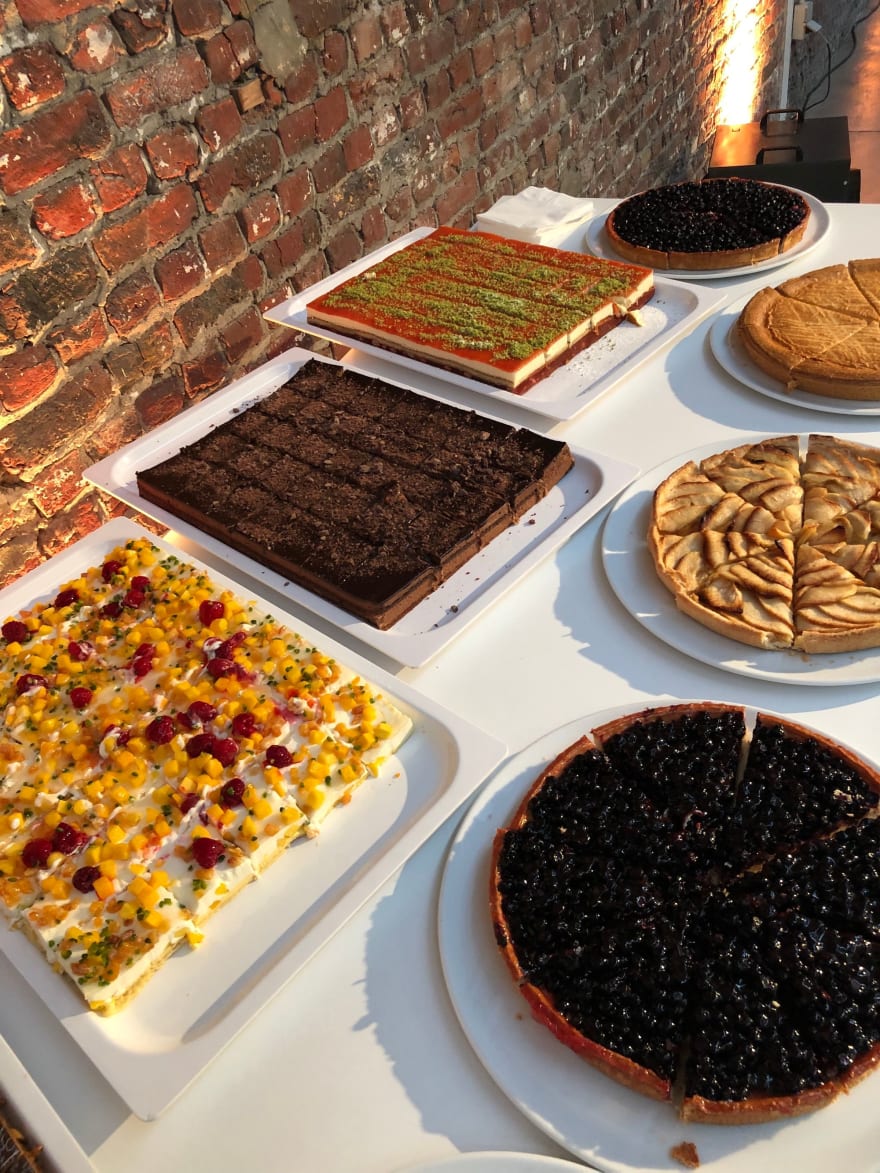 I am not saying everything was healthy but we had balanced meals. The quality of the food was excellent! They really made an effort on that and it showed. 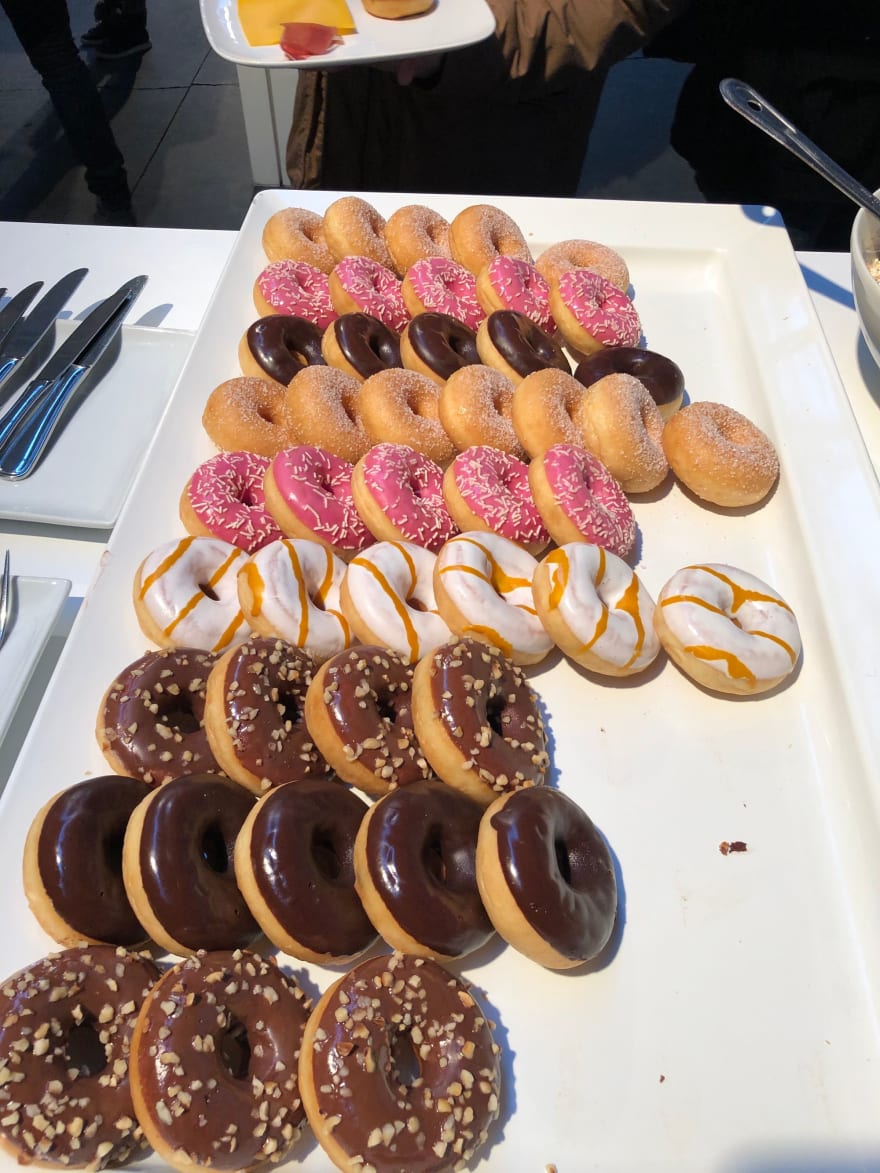 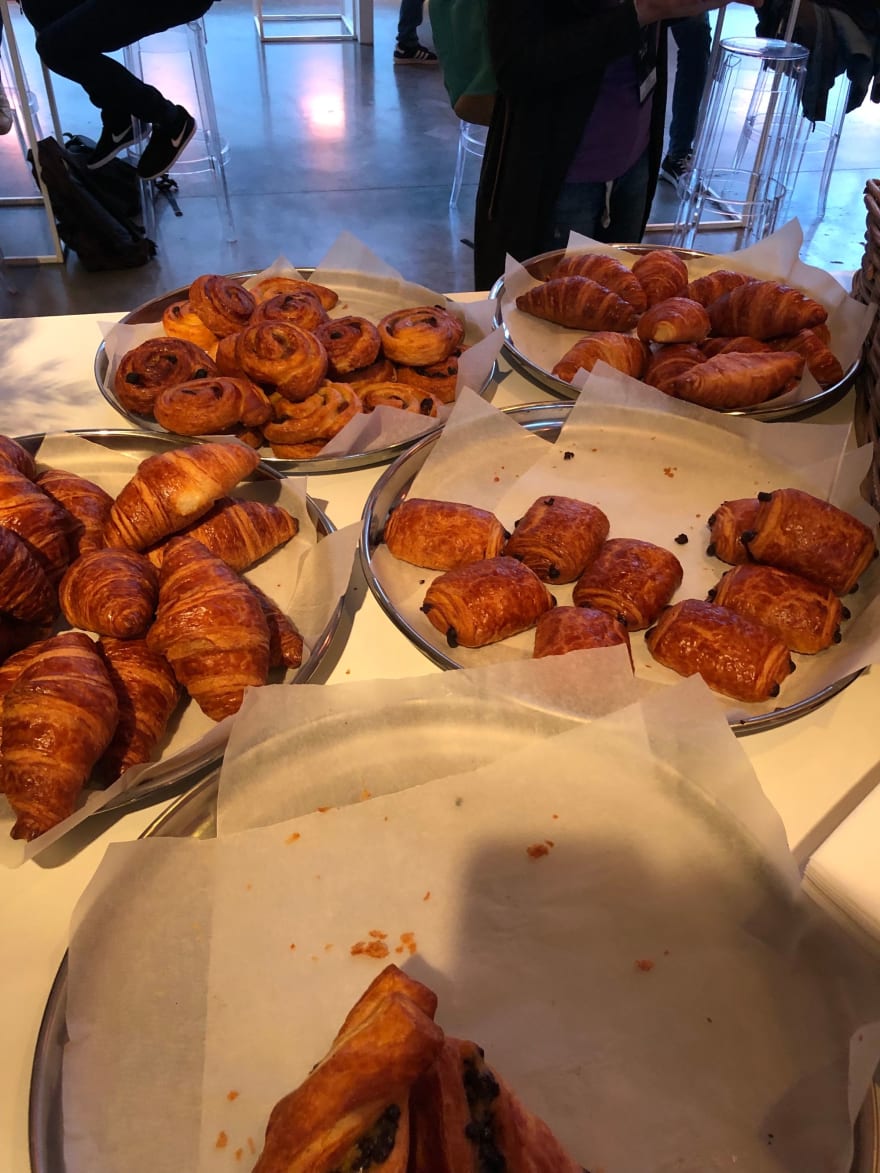 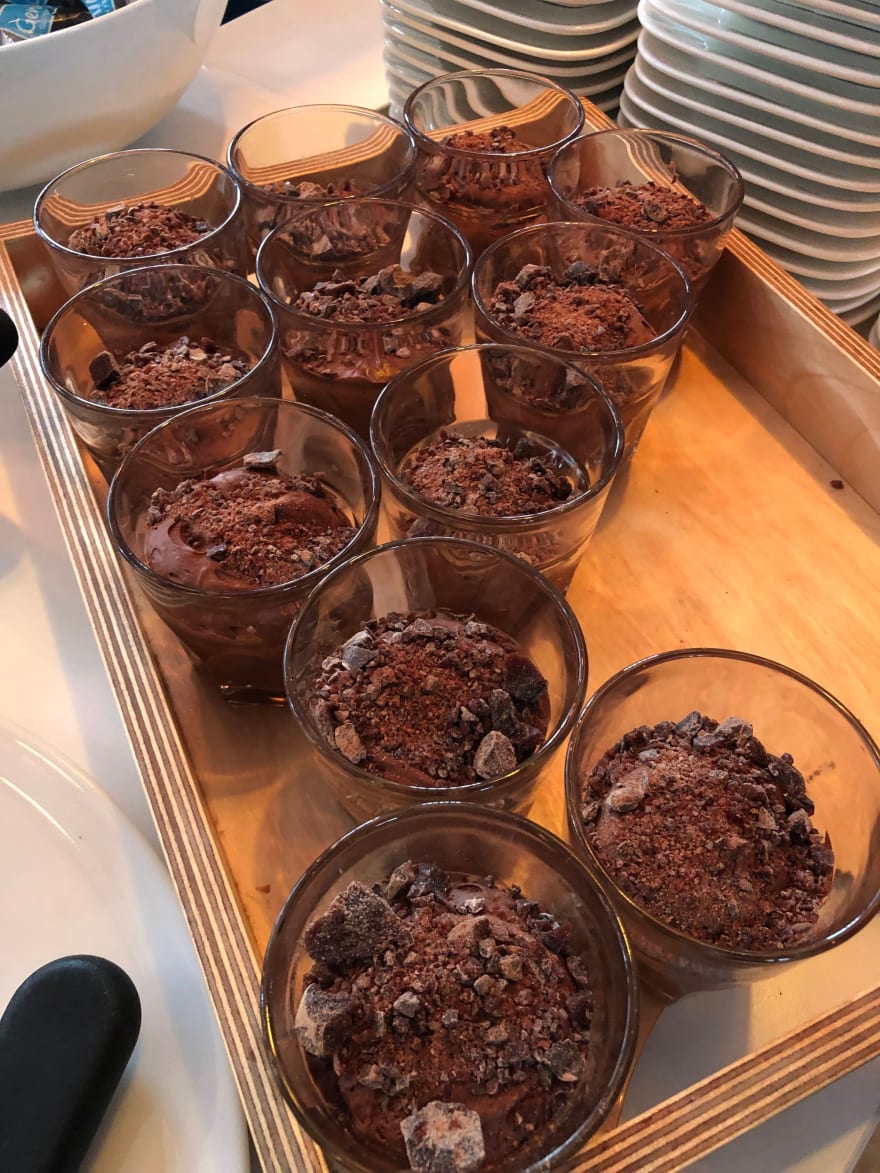 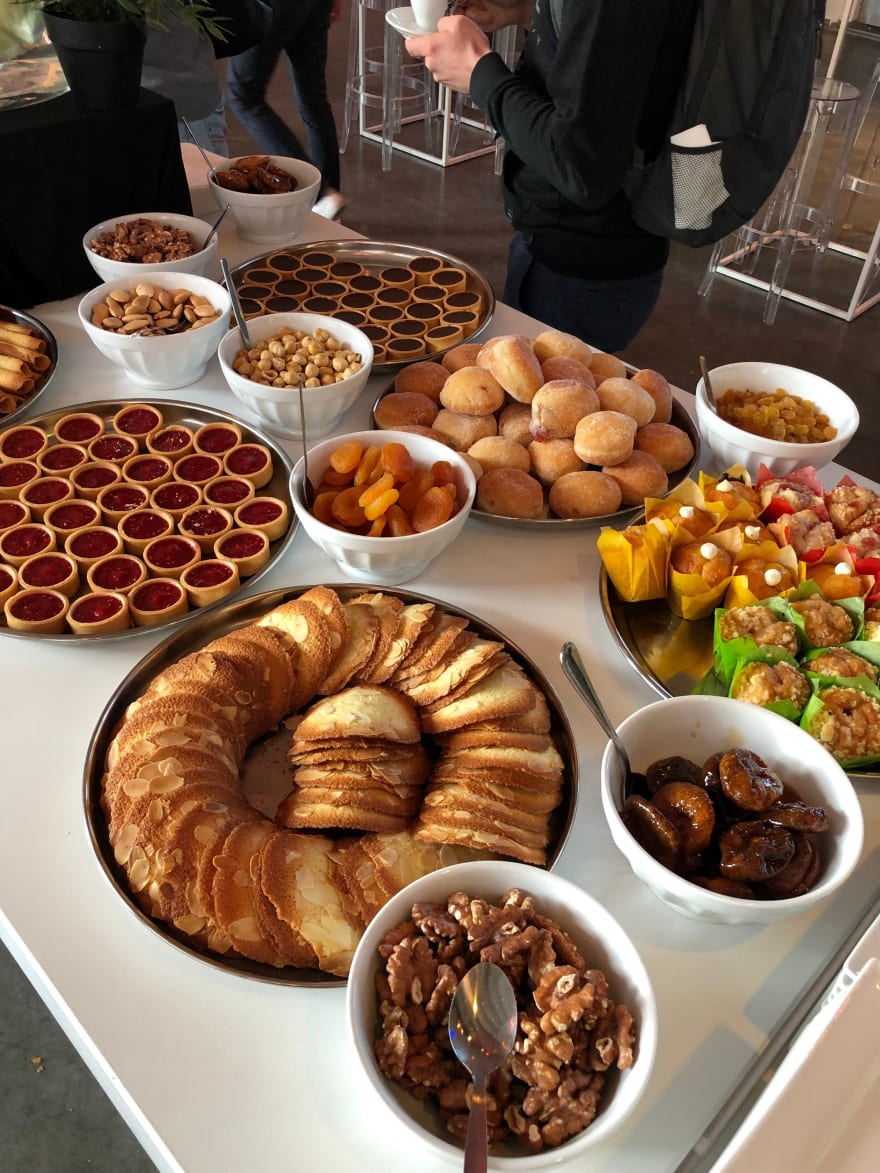 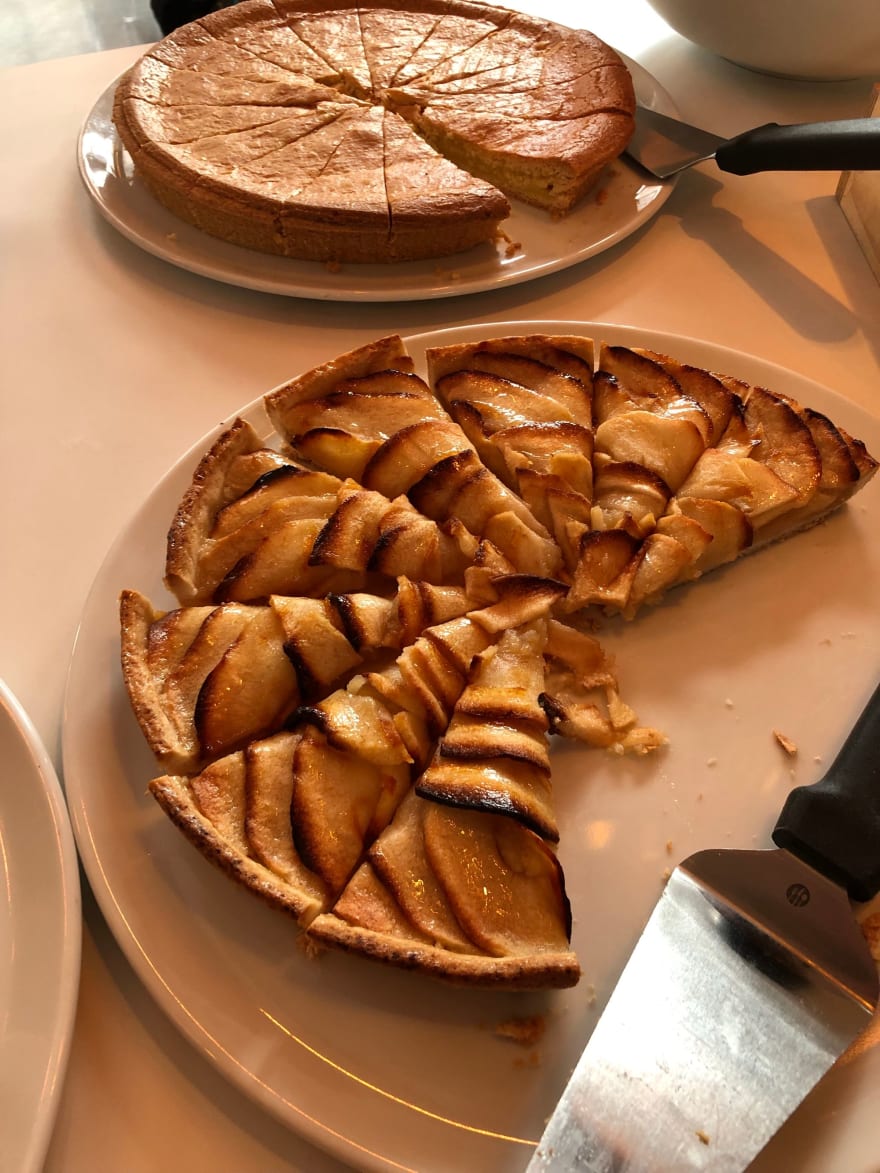 As I said earlier, I already wrote a full post on the talks of this conference. You can find this post on Welcome To The Jungle's website. The post I linked has a recap of each talk given on February 1st.

Of course, I had a few favorites. Here is a short list in no particular order :

What I didn't precise in the recap post is that there was an other day of the event dedicated to workshops. These are basically talks with practical exercises to do.

I signed in even though I knew these workshops were mainly for juniors/beginners. I didn't learn anything technically wise but I discovered a few new ways to use this tool and a few ways to explain Git to others. I also saw how other dev use Git, what are their tips.

Each workshop was an hour long. We have been busy up until 5:30pm, pretty much like a school day.

Katrina Uychaco (from Github) started full force with this first workshop. It was really accessible and made for people who didn't know Git. She covered the basics commands of Git, it was a good base to start with everyone on the same page for the rest of the day. 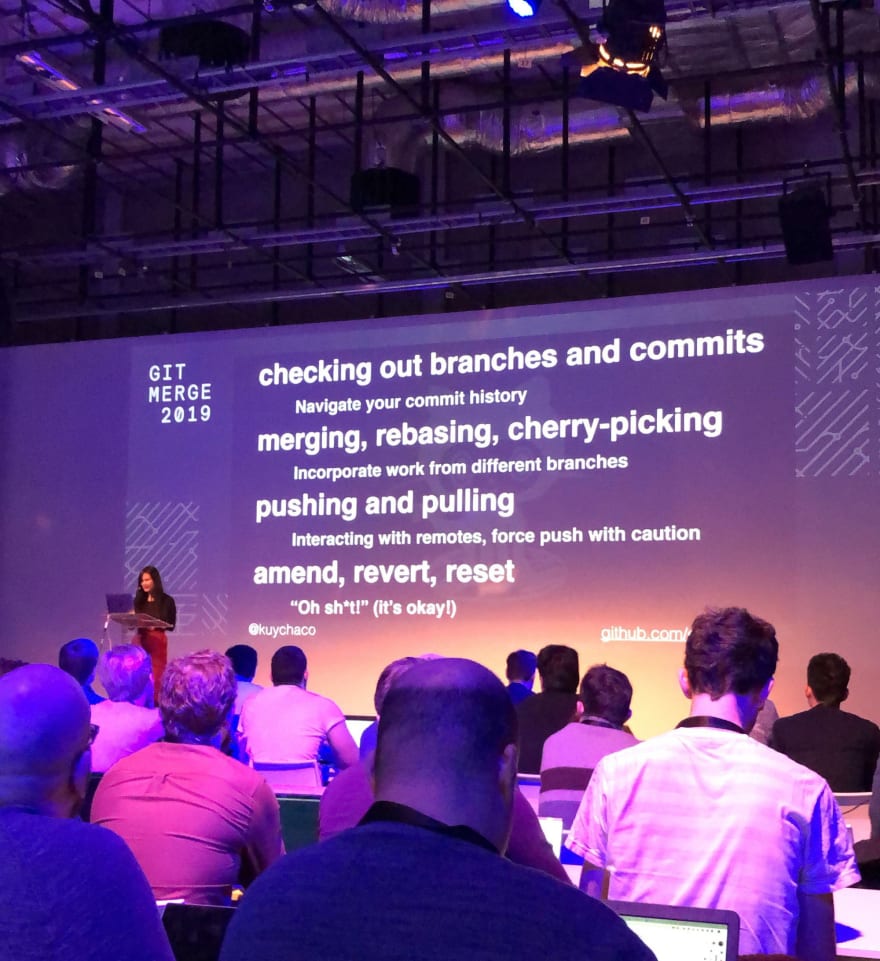 As an image for her words, she used a tool that emulate Git's way of work. This tool makes a graphic in real time of a repo depending the commands you're typing.

And this is the great thing of her workshop. Because in terms of commands and visible result, I learned nothing BUT thanks to her visualization tool, she showed and taught things that are normally not visible.

For example, the real result from :‌

Do you what these commands do to your repo? To your distant repo? Go check that tool out!

Atlassian then took over with Mike Corsaro leading the workshop.

To explain how Git alias, hooks, etc. work, he used several crazy examples. It really showed the features available in Git to people who don't use it on a daily basis. 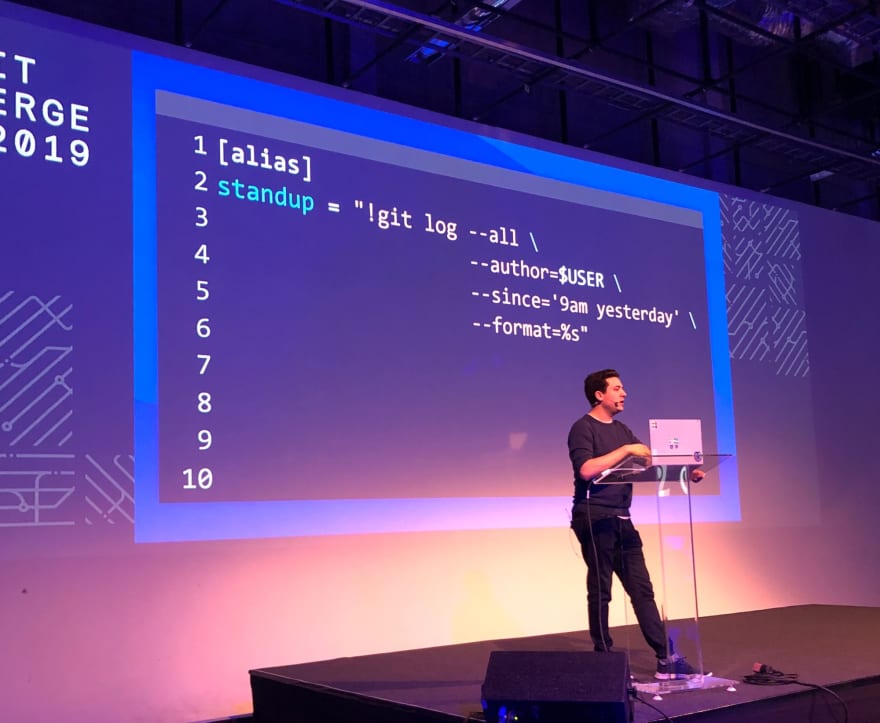 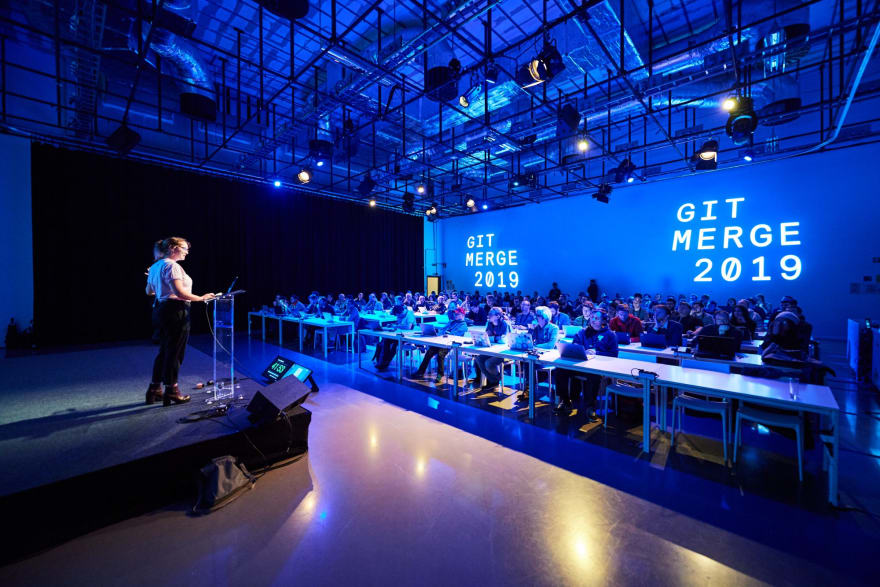 In this workshop, Pauline Vos wanted to show that the problems we may encounter with Git are generally because we don't use it well.

She selected a few problems that devs encounter in a typical work day. For each of them, she explained why this problem is encountered and how to solve it by knowing more and using Git better.

This workshop was similar to the following but he touched the subject based on Pauline's experience as a dev.

Ten Git problems & how to fix them

Briana Swift works as a trainer for Github. She works with all types of profiles but often has beginner for Git's use.

She came to the conclusion that many of the problems people had were similar. That is the topic of her workshop. She listed 10 problems her students encountered and showed how to solve them.

This workshop is similar to Pauline's but it focused on what students most often ask.

I was eager to attend this workshop! As you know, Git's workflows are a topic close to my heart. I am always impressed by Git's possibility to increase a dev's productivity by 10 if he uses the appropriate workflow.

For each workflow he showed, Johan Abildskov asked the audience if the had pros or cons. Then, he'd list his owns pros and cons and would rate the workflow based on three criteria :

Those are rather personal and subjective criteria. If you want to know his selection : the two first are respectively the Github flow and the Gitflow. He prefers the Github flow because it is much lighter.

Being devops, he explains that the Github flow works better with CI/CD than the Gitflow. Gitflow, though, is better to work with V cycle or version by version deployment.

The people I met

Conferences are not just to learn stuffs during talks, eating and enjoying the location. The last point is important : meeting with other devs.

As Git Merge is an international conference, I had the pleasure to meet devs from several country I probably would have never met otherwise.

For exemple, among the speakers were Ben Greenberg from Israel, CB Bailey from United Kingdom, Johan Abildskov from Denmark, Aniket Subhash Kadam from India, Pauline Vos from Holland, Briana Swift from Germany, and most of them were from the United States of America.

I also had lunch and chatted with two Google devs that are also Git core contributors : very inspiring. I had a beer with a Gitlab engineer. I also chatted with the founder and main developer from SourceGraph.

I really appreciated this conference and I hope you liked that recap.