What is Big O notation?

It is the language we use to talk about how long an algorithm takes to run which allows us to compare the efficiency of different approaches to a problem.

When we talk about Big O we are talking about the concept of asymptotic analysis which focuses on how the runtime of an algorithm increases as the input grows and approaches infinity. What this means is that as datasets get larger, it is the growth function which will be the dominating factor of runtime.

What do you mean by a growth function?

This is how we express the speed of which how quickly the runtime grows. Since we aren't measuring the runtime directly we can't express it in something like seconds. Instead we use Big O notation and the size of the input, which is denoted by "n" and we can express the growth using that input with expressions such as O(n), O(n^2), O(lg(n)), etc.

Here are some algorithmic examples:

This method runs in constant because regardless of the size of the array of items, only one step is happening.

This method is considered O(n) where n is the number of items in the array. It is linear because we perform a step for each item in that array. If there are 10 items, we print 10 times, if there are 100, we print 100 times.

This method is is considered quadratic because if the array has 10 items, we print 1000 times. This because we have a loop nested within a loop. For n items in the array, the outer loop runs n times, and the inner loop runs nu times for each iteration of the outer loop. This brings us to printing n^2 times. Note: if you have a loop within a loop, it is often (but not always) an indication that you will have a O(n^2) runtime.

Why do care about the dataset as its size approaches infinity?

It is helpful to see this visually. Below we can see that for that with a smaller dataset, the O(n^2) function runs in less time than the linear or logarithmic function, so we might be tempted to use the n^2 method. However, most of the time as programmers we work with very large datasets, and sometimes we can't know how big they will become as more users are created or more information added. We can see that as the input gets increasingly larger, the O(n) will have a faster runtime than O(n^2) and O(lg(n)) will be even faster as the dataset gets even larger. 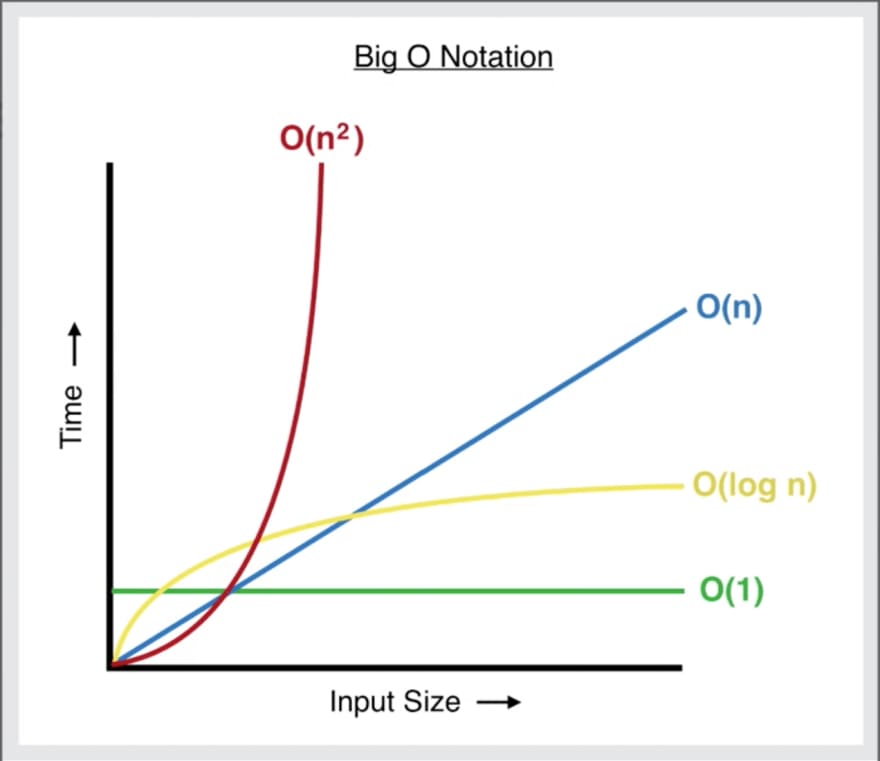 We also care about the input as it get arbitrarily large because when talking about our runtimes, we can drop constants, coefficients, and lower-order terms associated with the function. This is because all of these have relatively minor significance compared to the highest order component.

So if an algorithm was O(2n), we can ignore the 2 and just call it O(n). Similarly, a function that is O(n + n^2) we can refer to it as O(n^2) because the lower-order term becomes insignificant to the cost of the run time of n^2 as the input increases.

When programmers talk about Big O notation, it is typically implied that we are discussing the worst-case situation. There are a few reasons for this.

Introduction to Text to Speech and Speech Recognition using React-native

Meks (they/them)
Meks is a graduate of Flatiron’s part-time Full-Stack Engineer program. They are a software engineer primarily working in the PETAL stack. Their background is in Microbiology and Spanish.
Runtime Complexity Cheatsheet
#interview #algorithms
Building a Pokedex with Rails Part 2 - Authentication
#ruby #rails
Building a Pokedex with Rails Part 1
#ruby #rails

Once suspended, mmcclure11 will not be able to comment or publish posts until their suspension is removed.

Once unsuspended, mmcclure11 will be able to comment and publish posts again.

Once unpublished, all posts by mmcclure11 will become hidden and only accessible to themselves.

If mmcclure11 is not suspended, they can still re-publish their posts from their dashboard.

Once unpublished, this post will become invisible to the public and only accessible to Meks (they/them).

Thanks for keeping DEV Community 👩‍💻👨‍💻 safe. Here is what you can do to flag mmcclure11:

Unflagging mmcclure11 will restore default visibility to their posts.