CSS Grid Layout is the most powerful layout system available in CSS. It is a 2-dimensional system, that means you can handle both columns and rows, making it easier to design web pages without having to use floats and positioning.

The grid-template-columns property defines the number of columns in your grid layout, and it can define the width of each column.

But, if you want each columns being with different width you have to set a different value for each one like that: grid-template-columns: 50% 20% auto;

If you set the grid-template-columns prop to 2fr 1fr 1fr this will also divide your grid columns equal to each other but the first column will equal to two columns in size(width).

The grid-template-rows property all its values work as same as the values of gris-template-columns but, it will defines the height of each row.

Examples:
setting the grid-template-row to 300px 200px 100px the result will be like this image 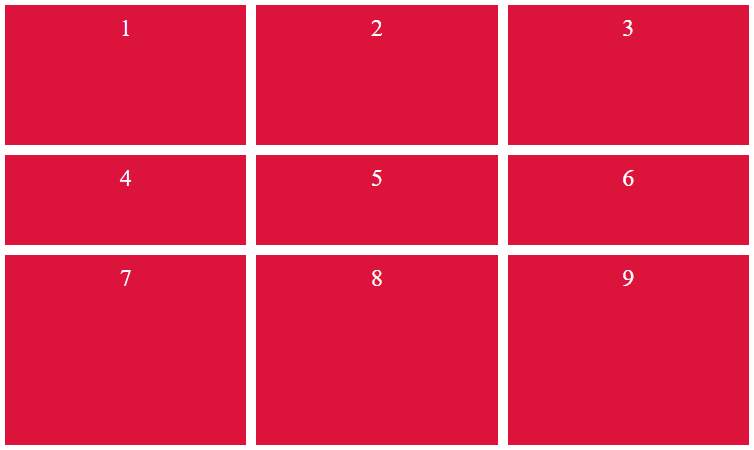 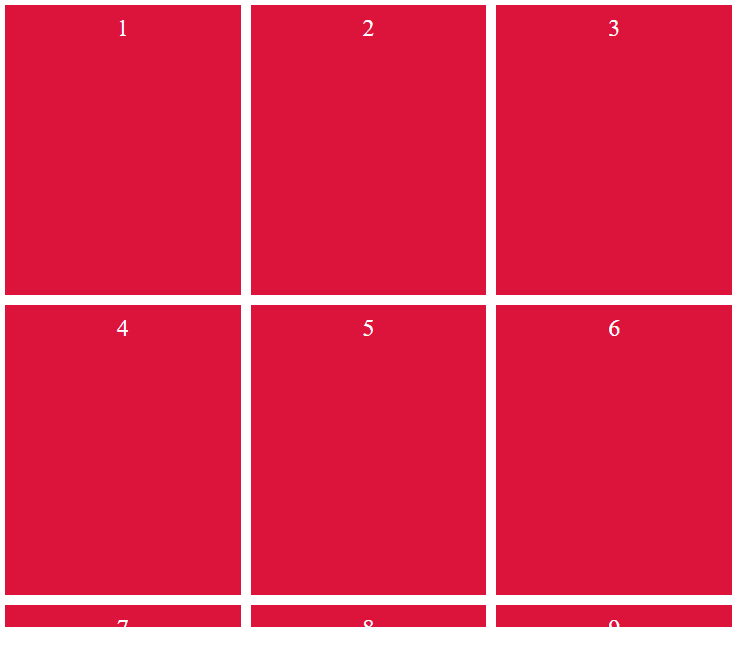 Minmax: if you have a content that is bigger or taller than the row size(height), in this case you can use a CSS function called minmax which defines a size range greater than or equal to min and less than or equal to max.
grid-template-rows: minmax(100px, auto);
grid-template-columns: minmax(auto, 50%);
The minmax() function accepts 2 arguments: the first is the minimum size of the track and the second the maximum size. Alongside length values, the values can also be auto, which allows the track to grow/stretch based on the size of the content.

In this example, the first row track is set to have a minimum height of 100px, but its maximum size of auto will allow the row track to grow it the content is taller than 100px.

The first column track has a minimum size of auto, but its maximum size of 50% will prevent it from getting no wider than 50% of the grid container width. 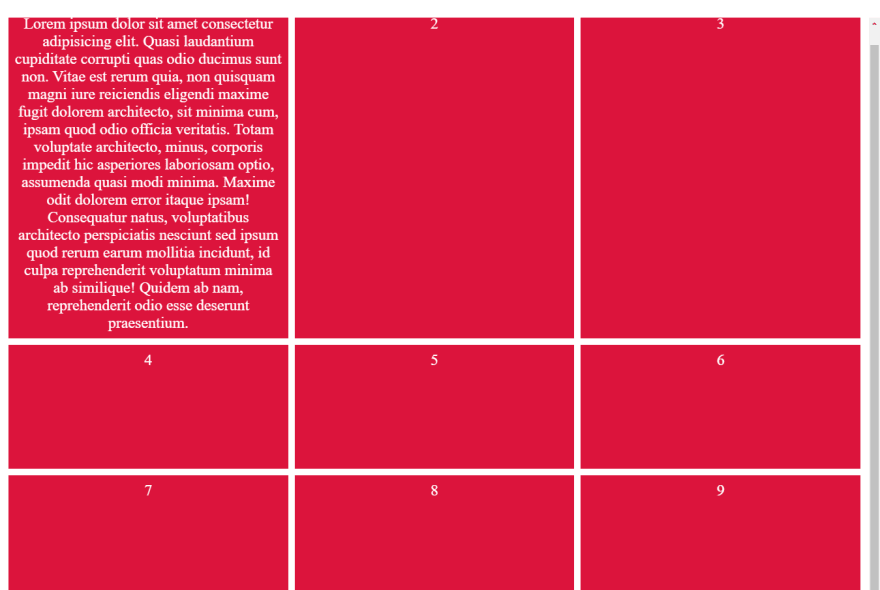 The grid-column-gap and grid-row-gap properties create gutters between columns and rows.

Grid gaps are only created in between columns and rows, and not along the edge of the grid container. grid-gap is shorthand for grid-column-gap and grid-row-gap.
If two values are specified, the first represents grid-row-gap and the second grid-column-gap.

💡Note💡: The image above show a gap between rows larger than 20px because I was setting a margin: 5px;
grid-gap: 20px;
One value sets equal row and column gaps.

Do you know that you can create a grid inside another grid? yes, let's see how?
If we need to create a grid for the paragraph elements inside the div with the class of nested-grid in the below image 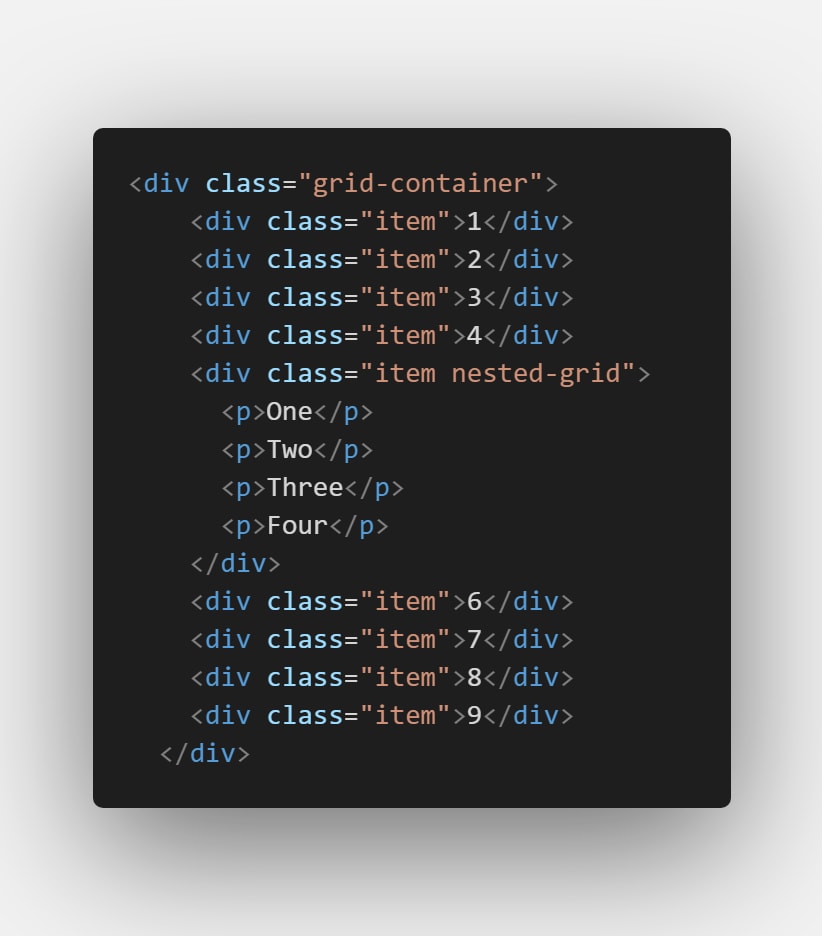 so, we have to give the div with class nested grid a display: grid, because it becomes the parent element for the paragraph elements and you can set the css grid properties we learned above to create the grid like that: 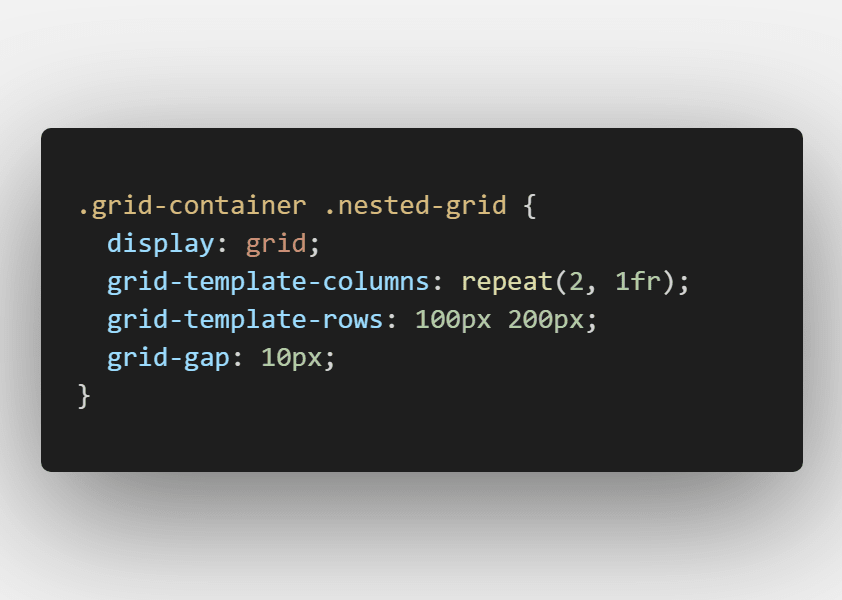 Grid lines are essentially lines that represent the start of, the end of, or between column and row tracks.

This 4-column by 4-row grid results in 5 column lines and 5 row lines. Item 6 was repositioned by row and column line numbers.

If one value is provided, it specifies grid-row/column-start, like this: grid-column: 1

If two values are specified, the first value corresponds to grid-column-start and the second grid-column-end, and must be separated by a forward slash / like this: grid-column: 2 / 4

grid-row also work as grid-column but it will effect the height of the row insted. grid-row is shorthand for grid-row-start and grid-row-end.

If two values are specified, the first value corresponds to grid-row-start and the second grid-row-end, and must be separated by a forward slash /.
Like this: grid-row: 1 / 4

Aligns grid items along the inline (row) axis. This value applies to all grid items inside the container. justify-items are applied to the grid container and support the following values:

justify-items: start; Items are positioned at the start of the row axis

justify-items: end; Items are positioned at the end of the row axis. 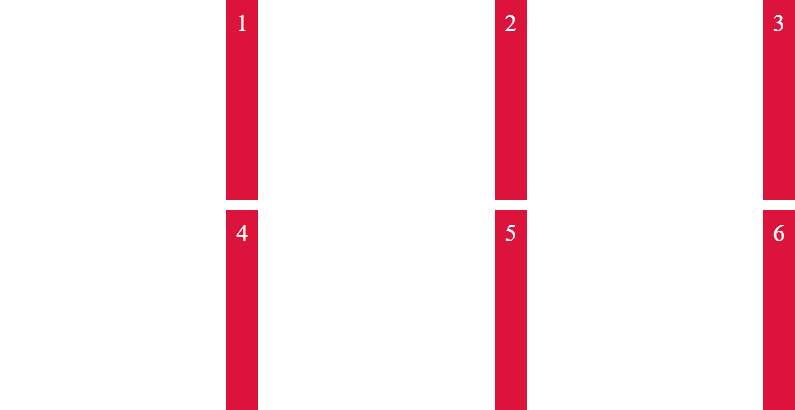 justify-items: center; Items are positioned at the end of the row axis. 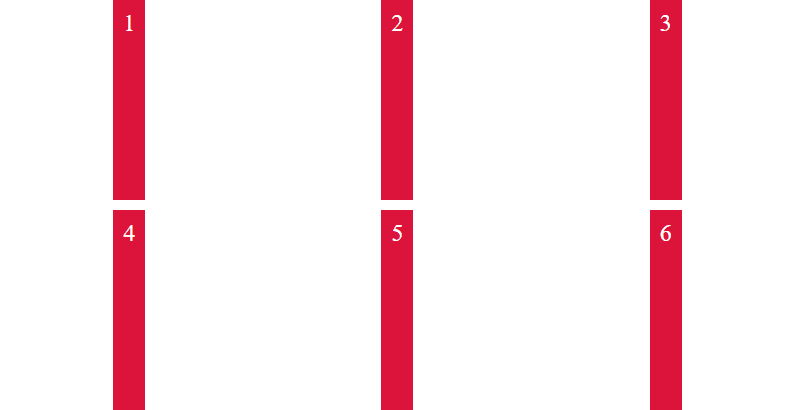 justify-items and align-items are applied to the grid container and support the following values:

grid areas can be named with the grid-template-areas property. Names can then be referenced to position grid items. 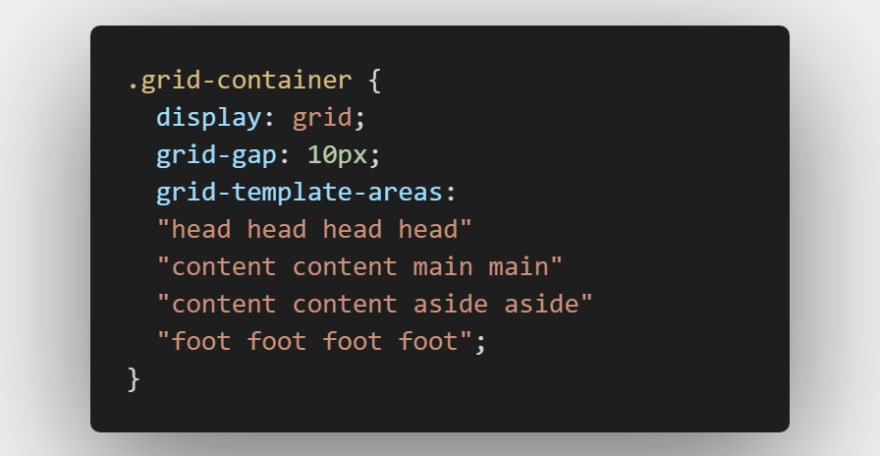 We have completely filled our grid with areas in that 👆 example, leaving no white space. However you can leave grid cells empty with this method of layout. To leave a cell empty use the full stop / period character, .. 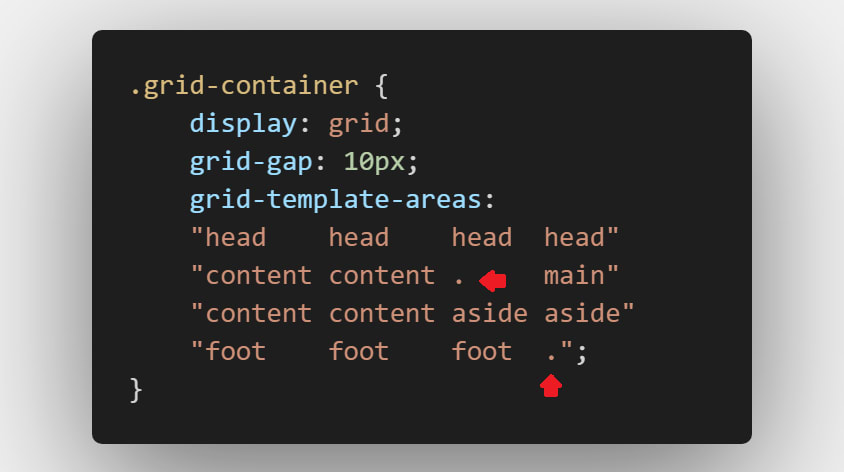 The basic difference between CSS Grid Layout and CSS Flexbox Layout is that flexbox was designed for layout in one dimension - either a row or a column. Grid was designed for two-dimensional layout - rows, and columns at the same time. The two specifications share some common features, however, and if you have already learned how to use flexbox, the similarities should help you get to grips with Grid.

In addition to the one-dimensional versus two-dimensional distinction, there is another way to decide if you should use flexbox or grid for a layout. Flexbox works from the content out. An ideal use case for flexbox is when you have a set of items and want to space them out evenly in a container. You let the size of the content decide how much individual space each item takes up. If the items wrap onto a new line, they will work out their spacing based on their size and the available space on that line.

Grid works from the layout in. When you use CSS Grid Layout you create a layout and then you place items into it, or you allow the auto-placement rules to place the items into the grid cells according to that strict grid. It is possible to create tracks that respond to the size of the content, however, they will also change the entire track.

A simple question to ask yourself when deciding between grid or flexbox is:

If you need to know more about the difference between Flexbox and CSS Grid, and want to know when to use them? I will leave some sources for you in the conclusion section.

This is a simple layout created using Flexbox and CSS Grid. You will find the source files in Github.com in the Conclusion Section at the end of the post. 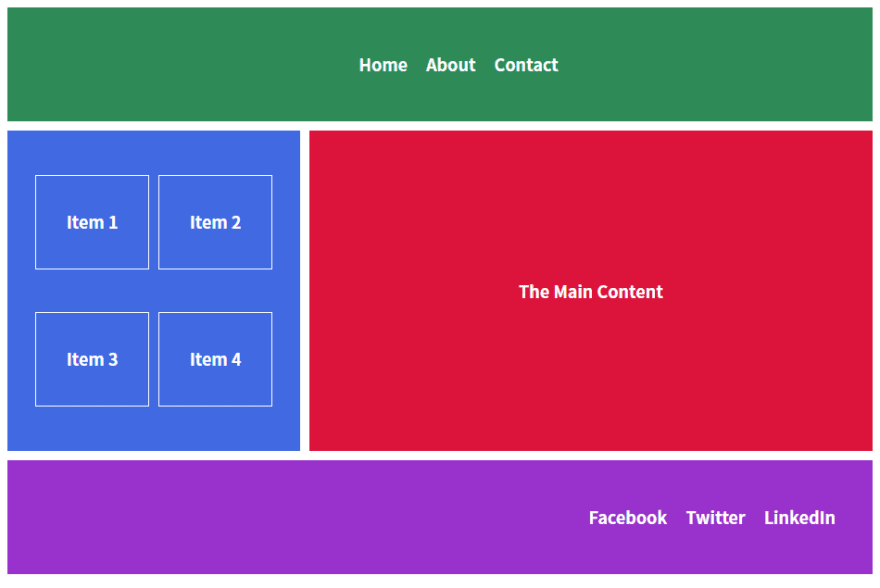 The source files of this post is here on My Github.com

Another sources for Flexbox vs CSS Grid

Mohamed Atef
I’m passionate about coding and I am a Frontend developer
How to center elements in CSS?
#css #web #design #centering

Once suspended, mohamed_gt57 will not be able to comment or publish posts until their suspension is removed.

Once unsuspended, mohamed_gt57 will be able to comment and publish posts again.

Once unpublished, all posts by mohamed_gt57 will become hidden and only accessible to themselves.

If mohamed_gt57 is not suspended, they can still re-publish their posts from their dashboard.

Once unpublished, this post will become invisible to the public and only accessible to Mohamed Atef.

Thanks for keeping DEV Community 👩‍💻👨‍💻 safe. Here is what you can do to flag mohamed_gt57:

Unflagging mohamed_gt57 will restore default visibility to their posts.