Does anyone else find installing XCode frustrating? I always need more free disk space, especially when installing a beta. This was the case when I downloaded XCode 13 Beta 5 from the Apple Developer Downloads page. When I tried to extract the xip file I got an error stating:

"The archive XCode_13_beta_5.xip can't be expanded because the current volume doesn't have enough free space."

I deleted XCode simulators and cache files to free up space with the following steps:

I also delete unused applications, log files, and music to clear up space. After much pruning, I had over 100GB free. Still, the Archive Utility app complained there was not enough free space! 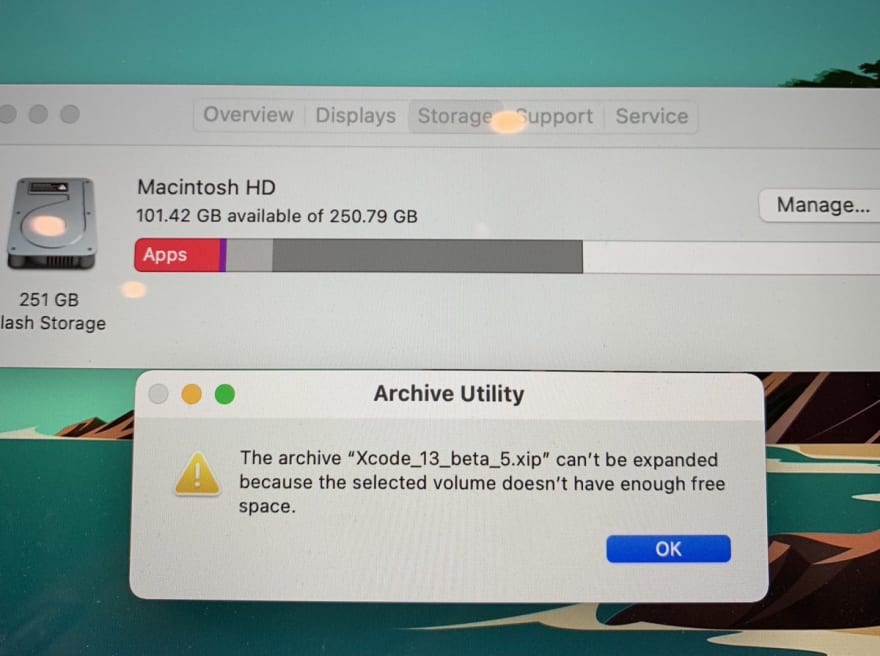 This seemed odd. I tried the solution proposed in this blog post: Installing Xcode with “not enough disk space available”. It didn't work for me. But I suggest trying it out.

However, the blog post did lead me to check my disk space using the Disk Utility app (Applications -> Utilities -> Disk Utility). It reported I only had ~25GB free when the "About This Mac" storage screen reported I had ~100GB.

After some googling I found this question on StackExchange: macOS not showing the actual free space. The answers said to delete Time Machine local snapshots. I did so, and boom, the Disk Utility app reported I had 100GB free. I tried the Archive Utility app again. This time it expanded the xip file and installed XCode Beta! Yay!

The commands I used to list and delete the time machine files were (from this answer):

The Archive Utility also does not consider the storage used by snapshot as free space. It checks for disk space before extracting the file and, in my case, detected that only ~25GB was free. By deleting the local snapshot, it was able to expand the xip file and install XCode Beta.

Your own Roam Research Quicknote REST API with Firebase

Once suspended, monicag will not be able to comment or publish posts until their suspension is removed.

Once unsuspended, monicag will be able to comment and publish posts again.

Once unpublished, all posts by monicag will become hidden and only accessible to themselves.

If monicag is not suspended, they can still re-publish their posts from their dashboard.

Once unpublished, this post will become invisible to the public and only accessible to Monica Granbois.

Thanks for keeping DEV Community 👩‍💻👨‍💻 safe. Here is what you can do to flag monicag:

Unflagging monicag will restore default visibility to their posts.