Team lead is a different job than developer and requires a slightly different skillset.

One simple technique is using the whiteboard as a tool to provoke discussion, make sure everyone is on the same page and to teach without appearing to teach.

The short explanation is that when a team member is explaining something complicated, asking a question or is making a decision as part of a group, stand up a start drawing what they say. Any mistakes will quickly be pointed out and everyone is working off the same information. 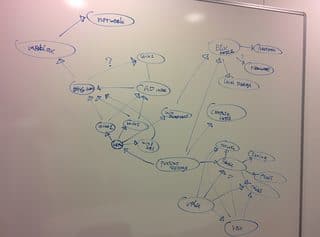 Often one of my teammates will have an idea that I don't understand. Or we'll want to do something neither of us understands.

The process I typically follow is a teammate begins explaining something complex in a meeting. As soon as they summarize the concept that I don't understand, or suspect others don't understand, I'll politely ask if I can draw what I think they meant. I make it clear that I want to check my understanding. I then make my best attempt to draw what they just described.

Typically during drawing the team will have suggestions about naming things, or where to put lines. I listen to them all and draw what the collective will wants. 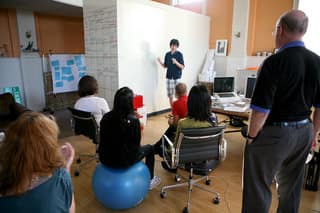 Everyone has had to explain a concept to their team or a member of their team. You can try email, or talking, but for fast, quality results:

This technique works best with advanced preparation, or at least a deep understanding of the topic. Starting with an overall block and arrow drawing to discuss and the drawing concepts as it becomes clear more explanation is needed is the basic outline of what to do.

A key technique, when teaching with the whiteboard, is to not monopolize drawing. The teacher should draw the initial concepts, but after that is done they should pass the marker to the student and encourage them to draw what they understand.

This has the added benefit that the teacher can see what they are not explaining well. 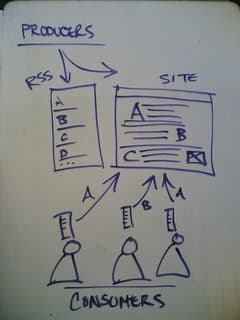 In many cases, Powerpoint is overkill or actively harmful.

Whiteboards are light, adaptable and can be pre-prepared for your presentation. They also encourage audience participation, which enhances retention of information.

Use whiteboards as a tool to learn, to teach and to communicate. Don't just draw on them. Actively using a whiteboard and passing it around between participants ticks off two different learning style boxes - auditory and kinesthetic. The more learning styles you use, the more likely information is retained.

And remember - whiteboards can be transitory, but if you need to retain what you've drawn, take a picture.

How to verify if point of coordinates is inside polygon [Javascript]