There is a project called ESBuild, basically a bundler like web-pack or rollup, and it has been making a lot of noise in the Front-End Development space. Why? Primarily because of its promise to deliver extremely high performance.

I would say this is especially great for large projects or large teams. In fact, it even supports Typescript out of the box which is why I am interested in it. In this blog, we will explore ESBuild and use it to build a simple Typescript+React app.

Then the only thing we need to install to set up our bundler is esbuild:

Since we are building a react app we are going to install React and ReactDom along with the type definitions for these two packages and the typescript compiler as folllows:

Once the installation is complete, let's use the Typescript Compiler to initialize a new tsconfig.json. Here we will also specify that all of our source files will be under the src/ folder and that we will be using react:

That's it! We have setup our project, now let's open up the the folder in an IDE, I am using Visual Studio, but you can use one of your choice.

Write up the sample app 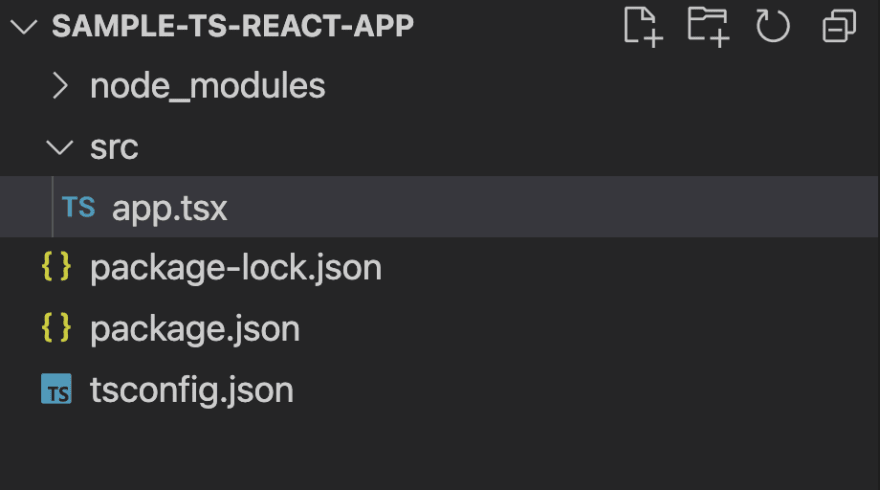 Now let's write some basic code. Here we import some of the common libraries and hooks including: React, useCallback, useState, and ReactDOM. Our app will consist of a simple component that will take a message as a prop, have an internal state for a counter that is initialized to 0, a callback function that increments the count by 1, and simple UI that shows this information.

Then let's render out this app component with a simple message using the ReactDOM onto the root element within our html.

Of course the next step is to actually create this HTML that our app will sit on. We will do this by creating a sibling folder to src called public/index.html. This file will contain a simple div with an id root which we will render the previous React App component to and a script to load the JS Bundler.

That's it for our app!

Next step is to use ESBuild to bundle our app.tsx. If you have worked with webpack or rollup, you know this process.

Before we bundle, I will first add a script in the package.json called build which will invoke ESBuild and pass in the entry point for the app along with a few flags (bundle, minify, and sourcemap) and an output target public/bundle.js.

Oila and just like that when you run npm run build we should be able to complete building our app almost in a blink of an eye (30ms!!!)

Finally running the app should be simple enough. Just point to the index.html file and it should run:

How does ES Build achieve such speeds?

ESBuild compiler actually targets the Javascript Ecosystem but it is written in Go. Now I am personally a fan of bootstrap projects, for example, the typescript compiler being written in typescript. However, this level of performance improvement a Go compiler for Javascript project does make it worthwhile for me.

All in all, ESBuild is still a great starting point to test how fast you can potentially build your application. Of course, you are free to explore using this skeleton code and build on it. I am personally looking forward to hearing your thoughts and experiences on ESBuild!

How I build Register and Login page using Supabase

Rails: Resources for a Secure Database

Once suspended, mrinasugosh will not be able to comment or publish posts until their suspension is removed.

Once unsuspended, mrinasugosh will be able to comment and publish posts again.

Once unpublished, all posts by mrinasugosh will become hidden and only accessible to themselves.

If mrinasugosh is not suspended, they can still re-publish their posts from their dashboard.

Once unpublished, this post will become invisible to the public and only accessible to Mrinalini Sugosh (Mrina).

Thanks for keeping DEV Community 👩‍💻👨‍💻 safe. Here is what you can do to flag mrinasugosh:

Unflagging mrinasugosh will restore default visibility to their posts.