Life was easy when Firefox was 32-bit and single-process.
In 2021 it is 64 bit, launches bunch of sub-processes, and with many open tabs I routinely see Firefox processes allocate 16Gb of ram and 20Gb of swap slowing down everything else.

I'm using Ubuntu 20.04 and here's what helped me contain unbounded memory usage. Steps for other Linux distros might be similar.

If you're running Firefox 93 or newer.

This makes tab unloading mechanism always active as opposed to the default setup when tab unloading kicks in only when less than 200 MiB or less than 5% of total memory remains available.

Since version ~93, Firefox supports unloading tabs that were not visited recently.

For me the problem is that Firefox is by far not the only process on the system which needs a lot of memory. The defaults are chosen quite conservatively and don't account for Firefox own contribution to the memory pressure.

Moreover, /proc/meminfo does not respect cgroups (more info in this article) which I use below to put limits on swap and memory usage, therefore the browser is unable to understand when its memory usage is approaching the limit I configured for it with cgroup.

Setting browser.low_commit_space_threshold_mb to aggressively high value should make tab unloading always on. In my experience, this greatly reduces memory footprint except when I open lots of tabs quickly. This also functions like a garbage collector and prevents memory footprint from constantly growing until the browser gets killed.

You may stop here and see if forcing tab unloading helps, or you may proceed with further suggestions to prevent Firefox from using swap and put a hard limit on the amount of memory it can use.

Be aware that once you enable v2, software that uses cgroups v1 (I imagine old Docker versions) may stop working. If you'll run into issues with older software, you know what could be a reason.

swapaccount=1 enables limiting swap usage. If it isn't enabled, cgroups will only enforce memory limits for RAM but not swap and so Firefox processes will not go over RAM limit but will push everything else into swap.

Read here and here if you'd like to learn more about swapaccount.

I'm using xfce and so I can edit Firefox launch shortcut from the menu. You might do similar depending on how you start the browser.

systemd-run allows you to start a process with ad-hoc settings under control of systemd and cgroups without having to create so-called unit files. In this case we're starting firefox but you can apply this to other programs of course.

--unit=my-firefox gives a name to a systemd "scope" where firefox process will execute. You can omit this parameter or rename it as you wish. I find it useful to give scope some name to be able to more easily diagnose it later.

--user tells to run scope in your "user" slice, not in "system". This allows process to be started without asking your password.

--scope configures how process is started. Frankly I don't know what this does, but you need it.

-p MemoryHigh=6G sets 6 gigabyte "soft hard" limit on the amount of RAM Firefox processes may allocate. Firefox may request more memory but OS will resist by slowing down allocation.

-p MemoryMax=6G sets 6 gigabyte "hard" limit on the amount of RAM for Firefox. If it tries to allocate that much, its processes will be killed.

In my experience, if there is a gap between MemoryHigh and MemoryMax, the browser becomes slow and almost unusable once it reaches MemoryHigh. It made little sense to let it run in this mode especially since it does not react on attempts to close window. Therefore, I prefer to have MemoryHigh == MemoryMax. This way the browser gets killed after reaching the memory limit and you can start it again without having to kill it from a terminal first.

-p MemorySwapMax=0 does not allow Firefox use swap. In my experiments, Firefox performance gets worse if small amount of swap is allowed. If large amounts (>10G) of swap are allowed, Firefox will actively push out lots of memory there and can run overall ok but it wears SSD. 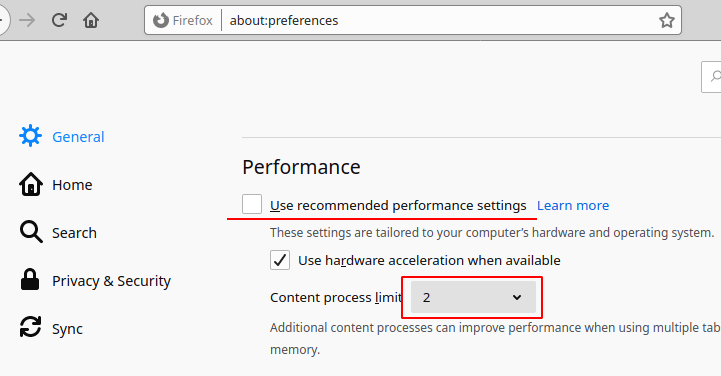 Note that this setting seems to be gone in recent versions of Firefox :-(

Firefox uses sub-processes to speed up page rendering. The problem is that each sub-process uses lots of RAM. Firefox decides their count automatically and for me the count seems to be 8. Each subprocess using 2Gb of memory easily pushes overall usage to 16Gb or more.

Here's the output for me showing that the current usage is 5.5Gib.

For me Firefox content processes each use 1.5-2.3Gb at peak load, and so MemoryHigh value should be greater than N*2.3Gb where N is the number of content processes you've configured in browser settings.
You also need to include some non-trivial amount for the parent Firefox process and other stuff that it spawns.
If your machine is low on memory, consider decreasing N, i.e. further decrease amount of content processes in the browser configuration.

Once suspended, msugakov will not be able to comment or publish posts until their suspension is removed.

Once unsuspended, msugakov will be able to comment and publish posts again.

Once unpublished, all posts by msugakov will become hidden and only accessible to themselves.

If msugakov is not suspended, they can still re-publish their posts from their dashboard.

Once unpublished, this post will become invisible to the public and only accessible to msugakov.

Thanks for keeping DEV Community 👩‍💻👨‍💻 safe. Here is what you can do to flag msugakov:

Unflagging msugakov will restore default visibility to their posts.