The EIP-2535 Diamonds is a way to organize your Solidity code and contracts to give them the right amount of modularity and cohesion for your system. In addition, flexible upgrade capability is a key part of it.

Let's get defined what a diamond actually is. A diamond is a contract that uses the external functions of other contracts as its own.

The contracts that a diamond uses for its external functions are called facets.

A diamond has a mapping inside of it that associates functions to contracts (facets) that have those functions. When an external function is called on a diamond the diamond looks in the mapping to find the facet to retrieve the function from and execute.

Of course, a diamond is implemented according to EIP-2535 Diamonds. That way tools can be used with them and it is easier to understand and work with people's contracts because they follow the standard.

Let's look at a diagram that shows a simple diamond. For simplicity generic names of things are used in this diagram. You should use names that make sense for your system. 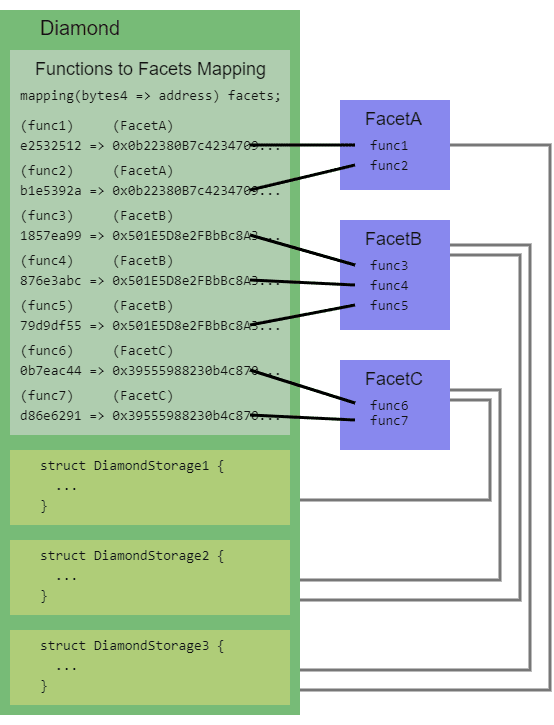 The diagram above shows the DiamondStorage structs in the diamond. It is true that all contract storage data is stored in the diamond, not in its facets. But the struct definitions exist in the facet source code.

A key part of the Diamond Standard is how it helps you with contract storage. It introduces a new storage technique called Diamond Storage. It is a new technique because until recently it wasn't possible to do.

Diamond Storage solves this problem by bypassing Solidity's automatic storage location mechanism by enabling you to specify where your data gets stored within contract storage.

Doing that might seem risky to you too. But it is not. Realize that this is how Solidity's storage location mechanism works for maps and arrays. Solidity uses hashes of data for starting locations of data stored in contract storage. You can do it too.

Modularity by Decoupling Facets from Each Other

In the past it was common for a facet to contain within its source code every single state variable that was ever used by the diamond, in the order they were first declared. Or at least these facets contained state variables in their source code that they didn't use. This was done to avoid the problem of a new facet clobbering existing state variables.

This means that facets that use Diamond Storage are independent from each other and it means that these facets can be reused by different diamonds. In this way facets become reusable libraries for diamonds.

In addition the diamondCut function emits an event that shows all changes made to a diamond. It records all additions, replacements and removals of functions.

A loupe is a magnifying glass that is used to look at diamonds.

How to Get Started Making Your Diamond

In order to call a function that exists in a diamond you need to use the ABI information of the facet that has the function.

Here is an example that uses web3.js:

In the code above we create a contract variable so we can call contract functions with it.

In this example we know we will use a diamond because we pass a diamond's address as the second argument. But we are using an ABI from the MyUsefulFacet facet so we can call functions that are defined in that facet. MyUsefulFacet's functions must have been added to the diamond (using diamondCut) in order for the diamond to use the function information provided by the ABI of course.

Get Help and Join the Community

If you need help or would like to discuss diamonds then send me a message on twitter, or email me. Or join the Diamond Standard Discord server.

Solana: Concerns and Integration To OpenSea

4 steps for developing the DeX application